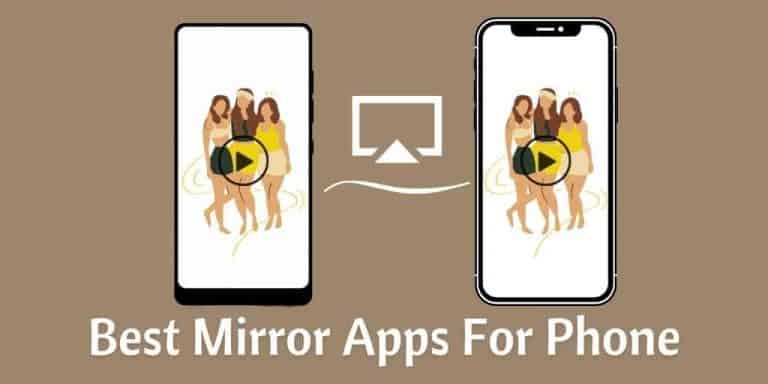 A good mirror app is all you need if you want to view its content on the big screen. However, choosing the best app can be a pretty challenging task, as many options exist.

That said, are you looking for the right kind of mirror app for your phone? If so, you will find this content to be absolutely useful.

Have you watched videos on a small screen with your buddies using your phone? Uncomfortable and difficult to appreciate due to its intricacy, it’s a dreadful experience for pretty much any individual. This can happen while playing video games.

Ultimately, why compromise when you can watch the same show on two separate screens simultaneously? If that’s the case, you may be wondering if that’s even possible. Yes, it is correct.

Everything is becoming possible as technology improves. That means with the right kind of mirror app for the phone, and you can mirror content to the big screen.

Reasons Why You Will Have to Use a Mirror App for Phone
How Can You Mirror One Android Device to Another?
01. ScreenShare
02. ApowerMirror
Mirroring Screen to iPhone from an iPhone
1. How to Use Apowermirror and Mirror Your Phone’s Screen to Another
2. Using Airview As a Mirror App for Phone
How to Mirror Phones of Different Platforms (Android and iOS)?
1. Mirroring to an iOS Device from an Android Device
2. Mirror to Android from an iPhone
Frequently Asked Questions about Mirror App for Phone
What is the best way to connect two phones for syncing?
Is it possible to use AirDrop on Android devices?
How can I mirror my phone to another phone without using Wi-Fi?

Well, if truth be told, it is totally possible to mirror your phone’s content to a bigger screen. Many options are available for you if you wonder how to do that.

Technological advancements allow you to cast anything on another screen through your phone. This will not limit you to sharing just a limited number of files between devices. These apps let you share the entire active screen instead of the files.

The next question is, why would you want your screen to be shared? What are the practical necessities? Let’s find it out.

By using a screen mirroring app, you may free yourself from having to deal with your younger sibling. That means the siblings who are peering over your shoulder while you play your favorite game.

Also, mirroring lets you watch you and your friend watch a movie together on a single screen.

PS: let’s figure out how to perform Screen Mirroring on Samsung S10.

How Can You Mirror One Android Device to Another?

There is no shortage of apps that claims to have the ability to share screens. The majority of those apps can be downloaded through your Play Store. If not, you can download it through Google.

So, let’s go ahead and learn about them.

ScreenShare is considered the most impressive tool to mirror an Android device. The best thing about this tool is that it is completely free.

Mentioned below is how to use this mirror app for the phone with ease to mirror your Android phone.

Here’s another great option for those looking for a good mirror app for phones. ApowerMirror comes with plenty of impressive features too.

Let’s go ahead and learn how to use this tool.

Mirroring Screen to iPhone from an iPhone

Like Android, mirroring from an iPhone to another is a simple process. ApowerMirror – the best Mirror app for phones, on the other hand, can handle both devices.

Because of this, iPhone users should choose ApowerMirror to be the best solution available. Other choices include AirView, TeamViewer, and so on.

1. How to Use Apowermirror and Mirror Your Phone’s Screen to Another

2. Using Airview As a Mirror App for Phone

To use AirView, you must have a jailbroken iPhone to mirror videos. Follow these instructions so you will not have any issues.

How to Mirror Phones of Different Platforms (Android and iOS)?

Well, there are methods to mirror phones of different platforms or OS. For instance, you can mirror an iOS device into an Android screen.

Mentioned below is how to do that.

1. Mirroring to an iOS Device from an Android Device

Let’s learn how to mirror your iOS device from an Android device with the help of the Mirror Apps For Phone.

● Use Screen Streams over HTTP

2. Mirror to Android from an iPhone

Now, it’s time to learn how to mirror an Android device from an iOS device via the best mirror apps for phones.

What is the best way to connect two phones for syncing?

There are a number of factors to consider while trying to connect two smartphones. Consider, for example, iTunes for iOS devices and Bluetooth technology for Android. Fortunately, there’s an all-in-one tool, and it is named MobileTrans.

This special tool can handle every type of operating system, including iOS, Android, and Huawei. MobileTrans allows you to transfer almost any sort of file between any two operating systems.

Is it possible to use AirDrop on Android devices?

No, it’s a resounding no. As of this writing, AirDrop is not supported on Android devices. MobileTrans, on the other hand, is your best chance to transfer files across Android and iOS devices.

How can I mirror my phone to another phone without using Wi-Fi?

You may now mirror without using any Wi-Fi connection, thanks to ScreenShare’s built-in mirroring feature. Bluetooth connectivity is all that is required. However, this solution is currently only compatible with Android smartphones.

You should make use of the screen mirroring capability that has been included in our cell phones. There’s an app for that, regardless of whether you use an iOS or Android device.

One of the most versatile mirroring programs is ApowerMirror, which can be used on both Android & iOS. And that’s all about the mirror app for phones. If you have other doubts, please let us know.