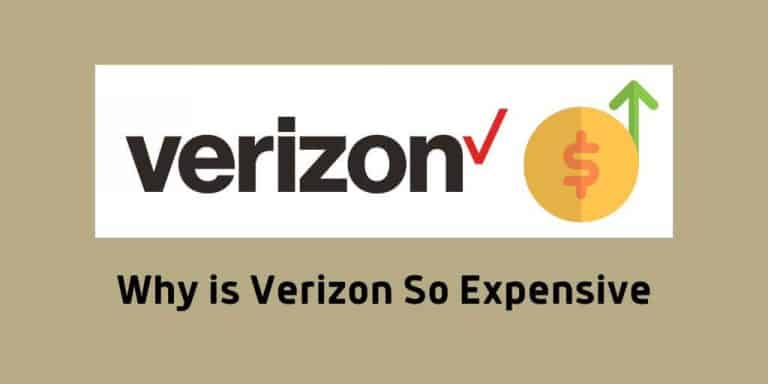 There’s no shortage of individuals who ask why Verizon is so expensive. If you are one of them, this article explains it to you clearly. So, let’s find out the truth about this matter by reading this article.

Verizon customers know how costly their service can be. As you may already know, even their most basic plan is more expensive than those given by competing companies. Basically, with Verizon, you will not find anything in the form of a discounted or “Cheap” plan.

A cell phone plan from Verizon was among the priciest options even a decade ago. The situation has obviously not improved even today.

The question is, “Why is Verizon so expensive“? Or how come Verizon’s smartphones are more expensive than those offered by other carriers? Well, don’t fret, as the remainder of this article explains it all to you.

Introduction to Verizon
It All Began with a Court Battle
Why is Verizon So Expensive?
They Adopt New Technologies Quickly
What Makes Verizon Phones So Expensive?
How Much Does It Cost to Have a Verizon Connection?
Do They Have Hidden Fees?
Is It Possible to Negotiate with Verizon?
Is It Worth Buying a Plan from Verizon?
How to Make the Most of Verizon?
That’s All About It
Any Doubts?

Before learning about why Verizon is so expensive, let’s get to know the company a bit. The American firm Verizon is in the business of providing broadband, wireless, and cable services.

The telecommunications firm is one of the seven so-called “Baby Bells.” Those were established as a result of a legal dispute between AT&T and the United States Department of Justice.

It is also described as the biggest wireless transmission network operator in the United States.

Besides, ‘SIM card is not from Verizon Wireless‘ can appear periodically & constantly. Let’s see what triggers this issue and how to fix it quickly.

It All Began with a Court Battle

Following the conclusion of the court battle in 1982, AT&T was required to give up control Bell System. This was a network that supplied telephone services to the majority of the United States and Canada. In 1984, there was a dismantling of the monopoly.

As a result, the company that would later become Verizon, Bell Atlantic, was established. After Bell Atlantic completed its purchase of GTE in the year 2000, the company’s name was changed to Verizon.

This is a portmanteau of the Latin term for truth, veritas, and the term for the horizon.

There are four distinct divisions that make up Verizon’s business operations.

So, in the next paragraphs, let’s learn more about its subscription plans.

Why is Verizon So Expensive?

There are a number of factors contributing to Verizon’s high prices. They have a larger customer base, serve a wider variety of customers, and spend more on infrastructure.

In addition to that, they tend to release new technologies more quickly than rivals. Their cheapest plans will still be more expensive than the market standard.

With that said, why is Verizon so expensive? That is mainly because they own the biggest market share.

What this means is that, as a dominant player in the telecommunications industry, they’re able to charge exorbitant rates. Verizon is not just the market leader when it comes to cellular network control.

In fact, it also serves many large organizations in terms of devices for company employees and mobile telecommunications assistance. Customers have high expectations for delivery and quality of service. In general, they are willing to spend more to receive these benefits.

Verizon is more expensive than its competitors for a number of reasons. For instance, it includes the company’s all-inclusive family plans and its rapid adoption of new technologies (like 5G).

This’s why, despite its high prices, Verizon is still the most popular cellular service provider in the United States. So, that’s the simplest answer for those who wonder why Verizon is so expensive.

What Makes Verizon Phones So Expensive?

There are several reasons why Verizon smartphones are far more expensive. Also, there are reasons why they don’t offer discounts like those offered by other providers.

In particular, the price of Verizon’s newest 5G Ultra-Wideband smartphone brands has increased significantly. This’s due to their elaborate redesigns and the inclusion of several ancillary technological components required for a 5G network.

The new millimeter wavelength high-band spectrum of Verizon utilizes the 39 GHz and 28 GHz bands. It is true that competitors like AT&T and T-Mobile continue to use sub-6 GHz frequencies (mid-band and low-band spectrums).

This makes 5G more widely available than even technologies like 4G LTE. However, it also implies that the modems required to power this 5G are more expensive. The certification and testing required for the antennae installed within the phones also contribute to their rising costs.

How Much Does It Cost to Have a Verizon Connection?

The plans introduced by Verizon start at 80 USD per month. This plan comes with 5GB of data. If you purchase the plan for four lines, you can get it at the rate of 180 USD.

If you choose the paperless billing option with automatic payments, you can get $10 deducted from your plans.

Anyway, their mid-tier plans seem to be the most popular ones among the users. For instance, Play More Unlimited offers 15 GB of high-speed data for mobile hotspots every month. This includes a package with Hulu/Disney+/ESPN+, Google Play Pass, and Apple Arcade.

Also, they have another package called “Do More Unlimited.” This package offers an additional 600GB of cloud storage on Verizon itself. Both of these packages cost 90 USD per month.

On top of that, they offer plenty of other family plans. They are popular specifically because you should pay only $40 per line every month.

Do They Have Hidden Fees?

When you are searching for why Verizon is so expensive, you should know if they have hidden charges too.

Some users say that their monthly bills are relatively expensive compared to the bills of other users. The truth is that there can be hidden fees included in your Verizon bill.

You may or may not know that all states levy a tax on every telephone to support 911 services. This is true with both wireless and fixed phones.

Your Verizon subscription may also include telecommunications sales taxes. So, that’s one good reason why Verizon is so expensive.

Is It Possible to Negotiate with Verizon?

You might try bargaining with the Verizon sales staff when you phone to configure or change your plan.

Don’t lose your cool and pressure them into a deal. Now is the time to be aware of your current and future financial obligations. You should also be prepared to read a printed or electronic bill.

In addition, phone calls are preferable to instant messaging. Get the lowest prices by calling in and talking to a real person who works for Verizon.

Is It Worth Buying a Plan from Verizon?

Verizon provides the greatest service available and is clearly the market leader in the telecommunications sector. If so, then why pay more? Some people will say “Unquestionably,” while others will say “No.”

Verizon’s new 5G network is particularly effective at bringing reliable Internet access to people in remote or semi-remote places. Bundling additional services, such as your streaming ones, can also help you save money.

How to Make the Most of Verizon?

You should purchase bundles to make the most of it. This is the secret to getting the best worth of your money out of Verizon.

So, you should keep this in mind. If you want to get the most out of your cash, select one of those mid-tier unlimited plans. These plans come with 15 gigabytes of data.

What if you currently have subscription plans to Disney+ and Apple Music? In that case, you may be able to reduce your regular expenditures.

This is because it is done by grouping both services into a single Verizon package. And it saves some money in the process.

That’s All About It

It is true that Verizon’s prices may be higher than those of other telecommunications carriers. However, the company goes the extra mile. They do it to make their services available to people who might have difficulty doing so otherwise.

A large number of package alternatives are also made available to you. And, you have the ability to negotiate through the telephone for better prices and discounts.

The new 5G network that Verizon has launched is still the subject of some debate. That is specifically due to the high prices associated with it. However, technical advancements of this kind are in high demand.

Given that Verizon is the industry leader, the company is free to choose its own tariffs. You can also modify those costs as necessary.

Your requirements for accessibility should be taken into consideration thoroughly. Make sure you do it before making a decision regarding whether or not to pay Verizon’s accessibility add-ons monthly.

So, now you have a clear answer to the question, “why is Verizon so expensive.” If you have more doubts, please let us know.

Visa Provisioning Service – What is It, and How Does It Work?