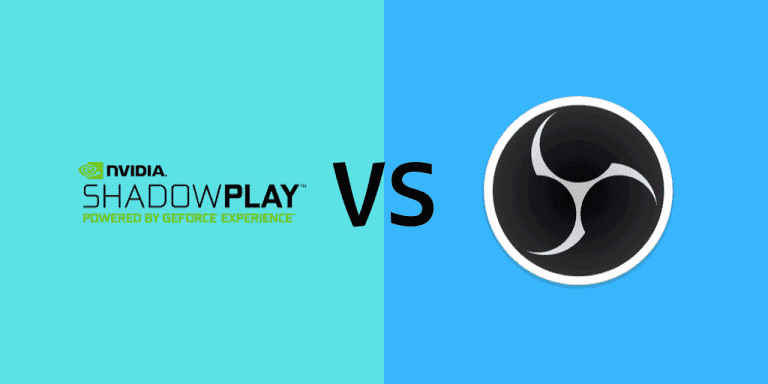 Livestreams have become a popular form of entertainment in the last couple of years. With its popularity, it’s also now easier than ever to become a streamer.

Platforms like Twitch and YouTube are the two best places to stream, with Facebook and Mixer not too far behind. Before you even choose which site to begin a stream on, ShadowPlay vs. OBS is your first decision.

OBS has been the most popular streaming software for years, but beginners often struggle to set it up. Because it not being the easiest software to prepare, software like ShadowPlay and Streamlabs have been getting more attention.

As great as these all are for streaming video games, the debate of which is best is stronger than ever. It’s even harder to choose when we need to consider preferences too. So, let’s dive in and investigate OBS vs. ShadowPlay.

ShadowPlay is a part of the NVIDIA GeForce Experience. When you install an NVIDIA graphics card, the drivers you install on your computer include ShadowPlay. After the initial setup, a few new features will be available for you.

The most impressive about ShadowPlay is its ability to capture the previous 30-minutes of gameplay without you recording the whole time. Basic screen recording is another option, and with all the videos you record, ShadowPlay has built-in social sharing.

As soon as the videos finish processing, you can upload them straight to YouTube or share them on Facebook. You can tweak the settings a little, but ShadowPlay is fully capable of recording at 4K resolution and 60 FPS.

Now, with a passive recording feature, you might have concerns about games lagging. It’s fair to assume that this would happen when deciding ShadowPlay vs. OBS, but it’s not a problem because NVIDIA uses hardware acceleration to maximize efficiency. That being said, if ShadowPlay causes framerate drops, then users can disable it.

OBS isn’t as impressive in the features department, but let’s not forget about the fact that it’s been the top broadcasting tool for a long time.

OBS is open-source software that provides users with the ability to change every setting in relation to streaming. Some users find this overwhelming and difficult to manage; others welcome freedom.

This is where the debate surrounding OBS vs. ShadowPlay becomes interesting. ShadowPlay starts to appeal to potential streamers because of its simple nature, whereas OBS is more advanced.

Setting this aside, OBS is great for both streaming and recording. If your internet isn’t that fast, then certain pre-sets make it quick and easy to find a balance between quality of stability.

ShadowPlay vs. OBS: Comparing the Details

Now that we’ve highlighted what both of these streaming programs are and what they can do, it’s time to compare them.

After doing our research, we now realize that there are too many details to compare ShadowPlay vs. OBS.

Rather than diving into all the details, we will focus on a handful of the ones we believe are the most important for streaming.

Live streaming is an incredibly resource-intensive process. Considering how resource-heavy it is to screen-record video games already, it’s no surprise how much more intense it is for live streaming.

Regardless of what streaming solution you use, there will be high resource usage, especially your CPU usage. In fact, there are some professional streamers who go as far as to build a second PC specifically for streaming.

ShadowPlay takes the trophy for this one. Since ShadowPlay uses hardware acceleration, the GPU handles live streaming with little effect on the CPU. OBS doesn’t have the same benefit and will put a lot of pressure on the CPU.

If you’re a fan of Twitch and YouTube, then you’ll no doubt have seen that some streamers upload stream highlights to their YouTube channel afterward. To do this, they will typically use a streaming solution that simultaneously streams and records.

This is another difference between OBS vs. ShadowPlay. Users can configure OBS to record their streams, and it won’t impact FPS or CPU usage that much. ShadowPlay is great for streaming and recording, but it can’t do them at the same time.

To add to what we’ve spoken about so far, OBS and ShadowPlay can also screen record. If streaming is more than just a hobby to you, then being able to record gameplay is also useful.

Of course, both of those streaming software solutions differ greatly in this regard too.

Starting with OBS, you can configure a lot of settings for screen recording. Simpler settings like the file format to bit rate are configurable.

As you record, OBS compresses the recording and processes the video as quickly as possible. This reduces the impact of recording on your FPS.

An added bonus is that OBS recordings don’t fill incredible amounts of storage space – something that screen recorders are notorious for.

ShadowPlay isn’t as technical at screen recording, which is good and bad. It’s friendly for beginners, but the lack of settings limits the experts. Whilst recording, ShadowPlay doesn’t process videos as quickly as OBS, nor does it compress them as much. With less compression, the gameplay you record with ShadowPlay fills more storage space.

Adding a sense of style to your stream has a big effect, so for OBS vs. ShadowPlay, we think it’s an important consideration. ShadowPlay’s style settings are as vague as could be – there are next to no style options.

OBS lets you add overlays, switch between pre-set scenes, and add plugins. Alongside overlays, you can add alert banners to your stream through OBS too. Better yet: since OBS is open-source, a lot of the plugins are made by other users.

Video compression, as we said before, is important for storing files. In particular, video files that we don’t compress can quickly fill large amounts of storage.

When it comes to just streaming, compression is crucial for bandwidth reasons. Compressing a video will greatly reduce the bandwidth usage that it needs to stream on Twitch or YouTube. OBS excels at compression, but ShadowPlay doesn’t compress as well.

To reiterate, OBS comes out on top for styling your live stream. Likewise, it’s the best streaming software for customization too.

This final detail in ShadowPlay vs. OBS isn’t that important for stream performance but for the viewer experience.

ShadowPlay remains the basic option for customizing a stream, so if a plain live stream is all you want, this is the program for you.

OBS doesn’t just let you create an eye-catching live stream. It also has implementation features and deeply technical settings so that you can customize your stream exactly as you want it.

Overall, both OBS and ShadowPlay are amazing for streaming video games. Beginners might find that ShadowPlay is better for streaming, mainly because of how simple it is to set up and start using.

Streamers with more experience and who want to configure their stream settings more will enjoy OBS.

The thing about ShadowPlay vs. OBS is that it largely comes down to preference and needs. Are you looking for a recording and streaming hybrid? Does video file size matter? Are you new to streaming, or do you know what you’re doing? All of these are questions that contribute to your decision.

Blu-ray vs. DVD | Differences Between DVD and Blu-ray Technologies

What Microphone Does PewDiePie Use For Vlogs?