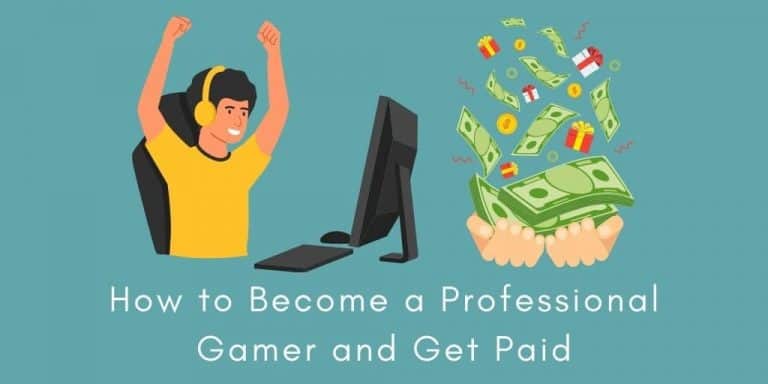 Do you like playing games? Have you ever thought of being a pro gamer? If yes, here, let’s figure out how to become a professional gamer and get paid step by step.

Part 1: Who is Classified As a Professional Gamer?

A professional gamer is a person who only plays video games, which means that a pro gamer will do nothing else for a living. However, nowadays, the foundations of gaming and esports solidify, and the true definition of a professional gamer changed.

Nowadays, pro gamers are the ones that play competitive tournament games. This leads us to the new concepts of “tournaments” and “competitive games.” Tournaments all over the world are organized on different scales.

Start with local tournaments, which treat the winners with a can of beer and a delicious pizza, and finally get to those international tournaments where the winners can win the price pools, which have over $50 million.

PS: here are the most popular Open-World Car Games for your reference.

Part 2: How Much Does a Professional Gamer Earn?

As we said in the previous paragraph, with the tournaments’ price pool alone, a professional game has the chance of winning a tremendous amount of money. Some can earn up to $200,000 per year!

Well, this amount is only the money that comes from tournaments. A professional gamer can get money from many other places such as donations, sponsors, streaming revenue, etc. One example would be Ninja, one of the most popular professional gamers who made around $17 million in a single year.

The amount of money mentioned is undoubtedly not a tiny amount, which does make a pro gamer into a luring job. However, in order to accomplish this achievement, you need to be at the top of the top. All the professional players who earn this much money are at the top of the field, and they also need to spend years doing practice to improve their skills.

Unfortunately, in the world nowadays with harsh reality, a newbie with relatively decent playing video games can not even earn a penny. So How to Become a Professional Gamer and Get Paid? In order to become a real professional player or join a professional team, you have to have unrivaled skills which really stand you out from millions of other players.

Below are some revenue channels for a professional gamer, including How to Become a Pro Gamer & how much can an ordinary player expect from these channels.

Part 3. How to Become a Professional Gamer and Get Paid?

For professional players that like to fight alone, Prize Money might not be that friendly. Four to six players are needed in a team that can compete in such a tournament, but depending on certain games or specific tournaments, this number may change.

And in the tournaments on a larger scale, the teams that can compete are only the ones that are invited. In this case, the small teams are not so welcomed. In such tournaments, only popular teams like Faze Clan & 100 Thieves will be invited. The tournament’s prize pool for a single win will be up to two hundred thousand dollars($200,000).

We have smaller local tournaments other than large-scale ones where new and less popular teams are welcomed. These tournaments might offer the price of around $1,000 to $5,000 for the victors.

Some tournaments with medium-scale will provide the winning team with a prize pool of approximately $50,000. In this case, this tournament will have some open spots for unknown teams along with the teams that are invited. B

ut the available places are super competitive, which will have competition around happening for the spots. Sadly, no prize money will be offered for the rounds that are done for competing.

In order to keep their players in their team, the top professional teams offer monthly salaries to the active top players. Esportsearning.com shows that professional gamers can get a salary of around $1,000-$5,000 every month.

The salaries are reasonably high amount money, but only the top players that have a track record of victory can get those salaries. These players are usually an essential part of the professional team. Similar to other companies and corporates in the world, the more valuable you are, the higher amount of money you get paid.

With that being mentioned, you can just ignore the monthly salary if you are just starting.

How to Become a Professional Gamer and Get Paid? Like many other kinds of sports and tournaments, sponsors are one of the most important parts of professional gamers and esports.

Drinks, as well as gaming accessories companies, could be the sponsor for sure professional gamers. And those gamers are supposed to wear or use the products of his or her sponsor on some tournaments or other public occasions.

Companies will only sponsor gamers who are popular and have a broad reach. While professional gamer has tournaments, they will need to create and stream some content too in order to attract some sponsors.

This method requires not only decent skills but also a charismatic characteristic or personality. While you are getting more and more popular, you can start adding ads in order to monetize this process. This is the easiest way to get started since this can quickly increase your popularity.

While you are not that well known, you are less likely to get invited to large tournaments with a vast price pool. So streaming acts as a warm-up to start everything.

What to Do in Order to Become a Professional Gamer and Get Money?

With all the revenue channels being explained, you will now realize that a pro gamer can really earn a lot. Now comes the problem: what the hell should I do to become a professional gamer?

How to Become a Professional Gamer and Get Paid? Finding a game is an essential thing to do to start your process of becoming a professional gamer. Usually, professional gamers will choose to play games that involve competing, such as Dota 2, Valorant, and CS: GO. Since tournaments are generally more focused on competitive games, there is bad news for the players that prefer narrative games and RPGs.

The thing is that viewers prefer watching gamers competing with each other instead of watching a single-player playing a narrative-based game. While the viewers themselves enjoy competitive games, the organizers of tournaments will be more likely to set up a tournament based on competitive games.

If you are a player that prefers RPGs and narratives, streaming would be the better choice to continue your gaming experience.

Finding Games That Are Worth Your Effort is Also Very Important

If you are a top player at an unpopular game, then you are probably less likely to earn much. No organizer wants to set up a tournament with an unwanted game. A great choice would be a relevant game that has the ability to stay relevant for a while. In this case, if you like this game, start practicing.

During this time, an example that’s worth a try would be Valorant. Valorant is the most popular new competitive game for now, and its market trend shows that this game has the ability to stay hot in the following years.

Before the release of Valorant, Fortnite is the one inside the limelight. And before Fortnite, Overwatch and PUBG are in the lead. These games are great competitive games to play, but they all become less and less relevant after the release. However, small and medium tournaments for these games still exist.

The great news is that your skills and techniques in a single shooter game can be carried to another game of the same kind. In other words, many professional Fortnite or PUBG players can easily and quickly master Valorant.

Be the Best at This Game

How to Become a Professional Gamer and Get Paid? Once you have figured out the game you are going to play, you need to be good at it. Mastering a game is the most basic and most important thing for a pro gamer. Play and practice it over and over again, play it during daytime and during nighttime. Practice makes perfect.

While practicing, don’t look at it as if it’s a leisure activity. Treat it and respect gaming as you would do to your studies and other jobs.

While practicing, you should not only play the game over and over again on your own. Having a mentor or teacher is as important as practicing. However, it’s expensive to hire a professional coach that is good at the game. While a coach costs a lot, watching a pro playing the game is free.

Many streamers and YouTubers are sharing their gaming experiences with others. So finding a pro and analyzing his or her skills is easy. When they took a great move, take note of it.

Learn what they do, and compare it to what you had done. Find your mistake, then fix it. Doing this process repeatedly can improve your skills and help you make your way up to becoming a professional gamer.

Start Competing with Others

How to Become a Professional Gamer and Get Paid? All the work you have done is for the following move you are going to make. When you finish mastering the game, create a roaster of your own with other gamers and start joining small tournaments.

Competing is an important step, but you will not be competing in tournaments all the time. So it’s important to record videos of your gameplay or stream when you don’t have tournaments to participate in. In this way, your popularity will increase. Spreading your own name can make your life easier afterward.

If you are a popular gamer with top skills, you will soon go under the professional teams’ radar and scouts. Professional teams such as Faze Clan and 100 Thieves also want valuable players.

So now is the time to put your effort, skills, luck, and faith altogether, and you will be able to be one player of the professional team.

How to Become a Professional Gamer and Get Paid? In order to become a pro gamer, you need to pay your effort as well as dedication. The whole process is hard and tough, but being a professional gamer does have many advantages.

Professional gamer is not simply about playing video games and getting money. The real pro gamers that the ones that are really good at the game.

There are hundreds and thousands of gamers nowadays, but only a few of them can really make the accomplishment. So if you realize that pro gamer is not the right profession for you, then just follow what you want.

This job is simply a job with high risk and followed by a high reward. Always remember: only the top of the top can make it till the end.

Titanfall 2 Crossplay – is It Possible to Do That?