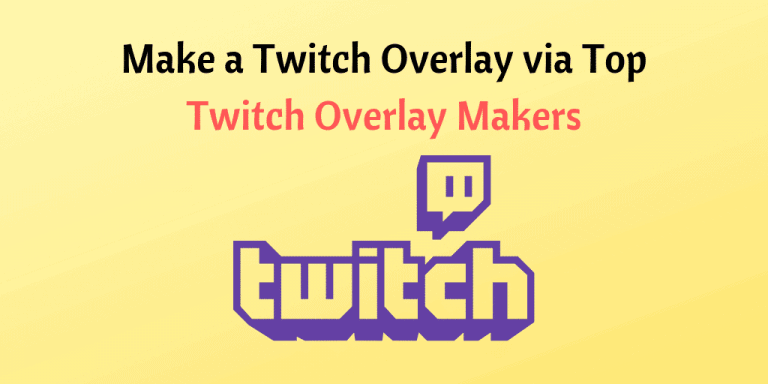 Twitch is inarguably the most popular live-streaming platform on the internet. It started exclusively for streaming video games, but nowadays, it is home to pretty much anything you can think of.

The “Just Chatting” section has a variety of interesting streams – live streams of police officers on duty, therapeutic streamers, Uber drivers, and musicians creating their own tracks.

Gaming tournaments are just the tip of what you can find on Twitch. A Twitch overlay maker is necessary for users like you who want to become popular on this site.

Plain streams aren’t a bad thing, but overlays can improve how a basic stream looks to viewers, and they can make the stream more enjoyable.

With many different overlay makers, there isn’t a reason for not having one either. To aide, your streaming efforts, here are the top overlay makers for Twitch.

Why Use a Twitch Overlay Maker?

As a newer Twitch streamer, you might wonder why you need to use overlay makers. To help you understand the benefits of this tool, here are some reasons.

Now, the next question you’ll have is how to make a Twitch overlay. The best method is to use an overlay maker, which, as we said before, will make your life easier.

Now’s the time to focus on the important stuff – what Twitch overlay designers can you use? Below we’ve put together a reliable list of makers and some of their best features.

Besides, if you are facing the Twitch Stream lagging issue, here are the top solutions for you.

Anyone who has been on Twitch for a while will know about Streamlabs. It is best known for competing with OBS (an open-source program for streaming) as the most popular live-streaming utility.

Streamlabs shook the Twitch stream and made it incredibly easy to start streaming on various platforms. This includes having features like a Twitch overlay maker.

The biggest thing to remember about this solution is that it’s free and is a one-stop streamer’s toolbox.

Less of a toolbox, but still a great overlay designer, is StreamPro. You can start learning how to make a Twitch overlay in a few minutes, and you’ll be happy to know that it isn’t difficult.

Creating unique designs for your Twitch stream doesn’t take much effort with StreamPro.

When you make an overlay, you can also prepare it for donations. Of course, it isn’t necessary to accept money from viewers, but since a lot of Twitch streamers make it their career, donations are important to consider.

Moreover, overlays that you make with this maker can react to donations, new subscribers, and new followers.

StreamJar is similar to Streamlabs and will give you everything you need to run a successful Twitch stream.

You’ll have access to a dashboard where details about your stream are shown, moderation and bot tools are available, and you can even set streaming goals to track.

Most important is the Twitch overlay maker that comes with it. The StreamJar overlay builder uses a drag-and-drop system that lets you design the perfect overlay.

Aside from the general design of an overlay, it can also display the chat and a banner that shows the name of your music. Any goals you set for your stream, such as reaching a certain amount of subscribers, can be shown too.

A slightly different site where you can arrange an overlay for a Twitch stream is Nerdordie. Not only can you create a custom overlay using the Nerdordie Twitch overlay maker, but they have a shop where you’ll find a lot of Twitch resources.

In their shop are overlying packs for Twitch and Mixer streams, and they work with OBS, Streamlabs, and XSplit. If you don’t want to spend anything, there are plenty of free resources.

TwitchOverlay.com shares a similar concept to Nerdordie. You can browse and buy premium overlays made by talented designers, download free overlays, and request custom designs.

Unfortunately, you won’t be able to access a Twitch overlay design tool. Instead, you explain what sort of design you want for your overlay and pay a fee.

The team behind the scenes then considers your request and designs an overlay specifically for your Twitch stream.

Next up is Overlayr, a basic but effective Twitch overlay maker that gets the job done without overcomplicating things. During the design, you can choose from the template library before customizing the colors and adding whatever widgets you desire.

Using the drag-and-drop approach, couldn’t be easier. There are plenty of templates so if you don’t want to spend a whole lot of time customizing, just grab an attractive premade design and add it to your stream.

Whatever games you live stream on Twitch, OvrStream is the perfect overlay maker to use. Either download the free version or pay $4.99 per month and get everything. The free version doesn’t include all the design features, but it has all the basics!

OvrStream doesn’t just produce high-quality and attractive overlays. In addition, those overlays can have motion graphics, and you can implement an alerts system too. When someone new follows your Twitch account or they subscribe, a fancy and creative alert will appear.

Last up in this line of overlay makers is Strexm. Knowing how to make a Twitch overlay is made simple with Strexm. Better yet, if you aren’t ready to make your own design, they have premade overlays for all the major games.

Integrating with Strexm is made easy, as well. Donations and subscriber notifications can be set up relatively quickly. If you aren’t happy using any of the premade designs, then you can use the overlay builder to either edit them or make your own from scratch.

By using one of these great Twitch overlay makers, you won’t have any problems running a high-quality and professional live stream.

This basic improvement makes all the difference and will undoubtedly bring in higher viewership.

These overlay creators are so great that anyone can produce good-looking overlays with them.

Having a sense of creativity will help, but even without it, you can make a decent overlay.

How to Use BINs to Make Premium Accounts

How to Transfer WhatsApp from iPhone to Huawei?

Kik Cheaters – How to Spot Them Easily?

What Does Snapchat Hourglass Emoji Mean?