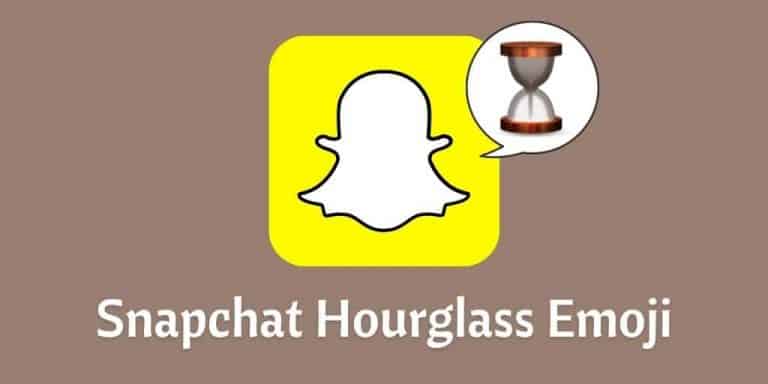 Snapchat Hourglass is an emoticon that has been the subject of many discussions among Snapchat users.

In other words, many Snapchat users wonder what Snapchat Hourglass is and what it does. To make things clearer, we have composed this article explaining everything related to Hourglass.

It is true that there are emojis that may be placed beside usernames to denote different things. In that case, Snapchat includes a number of other features that promote user involvement.

There has been some misunderstanding over the hourglass emoji, which is seen in the below section.

Snapchat is a photo and video-sharing software available on the Google Play and Apple App Stores.

Users of the app commonly refer to it as “Snap” in their specific conversations. Snapchat’s creator, Snap, is a publicly-traded business that has the same name as Snapchat.

In their own words, this specific firm claims to be an independent camera manufacturer. So, it makes hardware such as the Snapchat Spectacles, among other things.) Evan Spiegel, Snap’s co-founder, and CEO leads the company.

When you send an image, video, or text, that will be known as a “snap” in the app. Then, the recipient has access to it for a limited amount of time before it disappears.

What Does Snapchat Hourglass Signify Exactly?

The fire emojis are tied to the number of times you communicate with certain individuals on your friends’ list.

Just like that, hourglass emojis are linked to the Snapchat streak. That’s a simple way we can explain what Snapchat Hourglass is.

If you’re not familiar with the term Snapstreak or what these emojis symbolize, continue reading. This post will cover all you really need to learn about keeping your Snapstreaks going. On top of that, we explain what the various emojis on the phone implies.

Besides, let’s discuss how to make a subscription on Snapchat, why to choose ‘Snapchat subscribe instead of add friends‘, as well as how to add the subscribe button.

What Exactly is Snapstreak?

Well, do you want to learn more related to the hourglass emoticon? If that is the case, you must first grasp how Snapstreaks functions.

It is possible to start a Snapstreak by exchanging snaps with some other user for once (at the least). And you should do it every three days for a minimum of three consecutive days.

When this occurs, a fire symbol will be shown next to the user’s username. Do you want to keep the streak going?

If so, you’ll need to swap photos a minimum of once every 24 hr. Please keep in mind that you must both contribute photos for the respective streak to progress. This is a wonderful method to encourage people to continue to use the app regularly because it is entertaining.

In addition, a number will appear beside the fire symbol. That will indicate how many days the streak has already been going on in the profile.

Assume that you don’t exchange a snap for 24hrs. Then, the streak will come to an end. Also, the fire symbol will be replaced with a different one.

What Does Snapchat Hourglass Mean?

To inform you that your 24hr Snapstreak window is going to expire. Snapchat will show an hourglass symbol right next to its fire emoji beside the fire emoji on your profile.

Assume that you don’t respond soon enough after seeing this emoji. In that case, the respective streak will come to an abrupt halt. With that said, how much time will you have on your hands?

Just assume that the Snapstreak clock reaches its 20th-hour mark since your previous snap interchange. If that’s the case, the Snapchat Hourglass will display.

The streak will be over in around four hours. Because of that, you and your companion will have approximately four hours to attempt to extend it.

Do you expect to have this icon disappear? In that case, you may either swap photos immediately away or wait until your streak is over. You should do it before exchanging pictures.

There’s a “100” icon Displayed Next to Snapstreak; What is It?

Some users may see a ‘100’ icon next to their username in their profile. Well, this specific option implies that you’ve managed to trade snaps with a specific user for 100 days consistently.

In that case, Snapchat will automatically recognize your outstanding devotion by awarding you with a ‘100’ emoji. With that, they are going to commemorate the completion of your Snapstreak.

Upon reaching 101 days, the “100” symbol will be gone. That is irrespective of whether you choose to extend the streak or allow it to expire.

What is the Strategy You Should Use to Maintain Your Snapstreak?

Well, you must continue to trade photos in order to keep the streak alive. Of course, it’s not like all types of contact on Snapchat are considered snaps in the traditional sense.

Snaps are more messages that can be created by pressing the camera button on your phone. In other words, only photographs and video recordings contribute to your overall Snapstreak total. This is whilst texts and voice communications do not.

There are a number of other actions that don’t really count towards your Snapstreak, such as:

What Can You Do if the Snapstreak Gets Disappeared?

Imagine that your Snapstreak has vanished despite the fact that both parties have sent snaps. Well, if you experience such an error, it is possible that an app problem has happened.

If you suspect that your Snapstreak was erased as a result of an error, just pursue the following steps.

What if You and the Other Person Are Certain That You and They Have Followed the Requirements?

That means maintaining the streak. In that case, you may continue to talk with support and win the fire trophy again from them. So, that’s about Snapchat Hourglass.

When Using Snapchat, How Can You Easily Remove the Snapchat Hourglass Emoji?

In the event that you encounter the Snapchat Hourglass emoji, you shouldn’t be concerned. You can easily remove it in a short period of time. All that’s required is that you trade photographs with your closest pals.

When you have completed transmitting the Snap, the Hourglass will instantly disappear from your computer. The Hourglass serves as a visual reminder to double-check that you and your buddy have swapped photos.

Some users still see the Snapchat Hourglass on the screen even after sending the picture. Why is that?

That is, if the fault is not on your end, then it is not on our end either.

Your Snapstreak only continues if each of you submits at least a single snap in the next 24-hour period. Do you want to avoid the Hourglass from appearing? If so, if you’ve already sent a snap, contact your buddy and request them to send a snap. As a result, the Snapstreak will not display again.

However, what if both parties have emailed each other photos and Snapchat’s Hourglass can still be seen there? Then, it is possible that the problem is with the app. You should give Snapchat a few minutes to update the emojis.

Also, be sure to clear the cache because it is possible that the problem is related to the cache. Also, the hourglass emoji may be seen by both users as a reminder to keep their Snapchat streak alive.

Assume that the event that you don’t notice the Hourglass immediately away. In that case, you may have considerably less than 4 hours to complete the streak before it expires.

So, get in touch with your friend and attempt to have some photos sent as soon as you can.

Unfortunately, a streak can be erased because of system failures. If not, the same can happen due to busy pals who aren’t keeping up with their normal Snapchat activity. There can be other reasons as well.

On the other hand, assume that you are committed to keeping a lengthy streak. In that case, it is as simple as making a point of exchanging photos at least once every day.

So, that’s all about Snapchat Hourglass. Please let us know if you want to learn more about this specific feature or Snapchat.

How to Do Snapchat Hack with No Human Verification

How to Get a Snapchat Streak Back?

How to Reverse a Video on Snapchat via Different Methods?

How to Open a Snap Without Them Knowing?