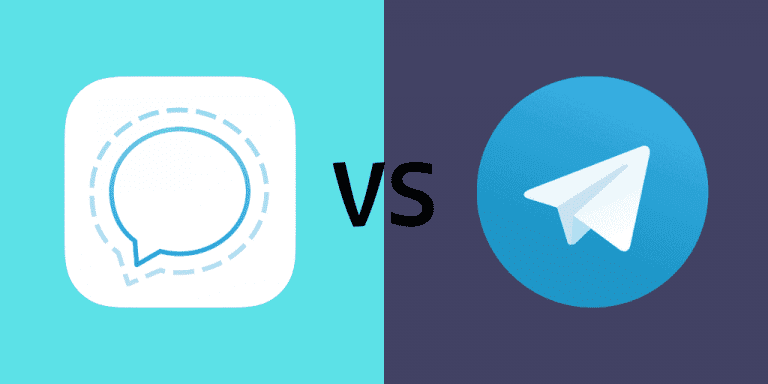 Social media platforms have been subject to a lot of criticism in recent years, especially the tech giant Facebook.

More intense are the legal repercussions that came with some of that criticism. Setting aside these complex legal debates that the day-to-day social media user doesn’t understand, something that every user can relate to is privacy concerns.

It’s not just Facebook; platforms such as Instagram and WhatsApp have been the center of privacy scandals. With all of this in mind, we’ll focus on Signal vs. Telegram and compare how secure each social app is.

These apps aren’t the most popular, but they aren’t far off. Telegram, in particular, is growing at an impressive rate, and because of its API, there are plenty of ways that developers can implement it as part of their own projects.

Signal has much in common with Telegram but is more open-source-based. Obviously, there are numerous other things to compare, so let’s get right into it.

Rather than your research and comparing every aspect of these apps, we’ve saved you the hassle. We’ve chosen the factors that we think are the most important. Below we’ve compared how these factors are reflected in Signal and Telegram.

The main debate surrounding Signal vs. Telegram is how secure they actually are. Whether the encryptions are strong enough and the general reliability of these apps’ security are at the center of the debate. This will be split into even smaller parts for a better understanding.

What is encryption? In simple terms, encryption is how computers prevent unauthorized people from accessing data. Messaging apps encrypt messages and files you send so that only the recipient can view them. Telegram and Signal have very different outlooks on encryption.

Telegram uses a custom encryption method called MTProto, specifically developed for the popular messenger. As you’d expect, the developers were hit with a backlash for not using a mainstream, well-known, and reliable encryption method.

They quickly refuted any weakness in the encryption and took the bold step of hosting a competition offering $300k to anyone who could successfully intercept the encryption – nobody was successful.

Signal also uses custom encryption, but it has been around for longer and was a widely supported project prior to Signal’s takeover. The Open Whisper System is open-source encryption that enforces end-to-end encryption (like Telegram).

We could get more technical about the encryption, but for many reasons, Signal is believed to have the superior encryption technology in place.

Similar to Snapchat, Telegram lets you add a timer to your send. When you send any type of media, you can set a “Self-Destruct Timer” ranging from 5 to 60 seconds. Messages can also be deleted up to 48 hours after being sent.

Signal has an identical feature, with two improvements. First, you can also add a timer to your text messages. Instead of having to delete them and risk missing the 48-hour deadline manually, a timer deals with it instead. Secondly, the timer is much longer and ranges from 5 seconds to 7 days.

Secret chat is where a spotlight is shone on each app’s encryption abilities, and Signal vs. Telegram is almost settled.

Telegram’s secret chat feature is where you can use the “Self-Destruct Timer,” and anything sent here is encrypted. However, after further investigation, this is the only place where Telegram uses encryption. Unless you use the secret chat, your messages will have no protection. On the other hand, Signal has constant encryption in play.

You might ask, “why doesn’t everyone just use secret chat then?” and this would be a solution. Unfortunately, too many users don’t know about this feature. Moreover, it isn’t clearly shown. Users can only access it by going to a contact’s page and tapping the settings icon.

To prove we’re not being biased against Telegram, one thing it offers that Signal has yet to add is Two Factor Authentication. A subtle but nonetheless important account security feature.

Even if you send photos with a timer on them, Android users can save the photos by viewing the app data. This is a serious problem with Telegram that reduces the efficiency of secret chat.

Endorsements don’t really say a lot about the software itself. A couple of important names prove the strength of these apps’ encryption, though.

Edward Snowden, a man who whistle blew a lot of concerning details about the American government, and Bruce Schneier, a notable computer program who is praised for his cryptography and cybersecurity skills, are both advocates of Signal’s encryption.

Both men have lots of knowledge of encryption and internet privacy. These two endorsements are powerful enough to label Signal as the most private and secure messaging app available.

Everything you see on your screen falls under the umbrella of UI design. Icons, menus, responsiveness, and layout are just a few focuses of the UI design. The dark mode is a fairly simple yet popular UI feature that both apps include. This adjusts the app’s color scheme so that it isn’t as bright as the regular model.

In terms of design flaws, it could be said that both apps fail to provide menus at the bottom of the screen. Sure, this isn’t a requirement, but it makes using apps easier with one hand.
Signal has another disadvantage.

After you launch the app, the default display isn’t your contact list but is instead a list of your current chats. This means that you have to use the search bar to chat, call, or video calls a contact you haven’t already messaged.

When using Telegram, two versions can be used. Telegram X includes several features that the main app doesn’t, so you can expect the interface to be different.

Overall, Signal vs. Telegram for the UIs are pretty even. They both have design flaws, but there isn’t anything ridiculous about either UI design.

This can seem complex to consider when comparing messaging apps like Signal vs. Telegram, but it’s very interesting nonetheless.

When using Signal to text or call, something known as a “Safety Number” is randomly generated for each contact. If you text or message someone, you can view this number to verify that you’re talking to the correct person and not a fake account.

Seems pointless? Not quite. Let’s say you decide to use Signal for messaging and calling business associates. Whatever information you text them will need to be confidential, and the last thing you want is for it to fall into the wrong hands.

A similar mechanism is in place when you make calls. Signal generates a different security phrase made up of two words. You and the person you call are made aware of this phrase. When you call your contact, you can verify that there’s no interference by saying the first word in the phrase and having them say the second.

Understandably this might not seem like an impressive feature if you use Signal for everyday messaging. However, in cases where sensitive information is being shared, and privacy is of the utmost importance, this is magnificent.

Telegram does not have a similar or equivalent feature in place. Thus, Signal takes the crown in this aspect of Signal vs. Telegram.

Pricing is always a factor to consider in any comparison. Fortunately, in cases like Signal vs. Telegram, both messaging apps are free to use. This includes iOS and Android apps, as well as computer programs.

Additionally, given that free apps often fill the interface with ads and make the app free, it’s worth mentioning that neither app does this. Signal and Telegram don’t have any form of advertisement on their apps and are both free to use – that’s a win-win!

Other Features to Consider

Security and privacy are two very important factors to consider when you use a messaging app, but that’s not all. Below we’ve picked out some of the other notable features that Signal vs. Telegram should include.

Although both apps provide group chats, Telegram has a significant advantage. Your group chats on Telegram can be extended to as many as 200,000 users – far from common and definitely not an easy feature to maintain.

Continuing with the massive groups, you can define group roles. Managing large groups is difficult, especially if you’re a YouTuber or have an online fanbase. Make this easier on Telegram by giving trustworthy members Administrator and Moderator powers.

Various aspects of groups are what push Telegram to succeed in this Signal vs. Telegram comparison, and here’s what can help you maintain groups:

Overall, when groups are taken into consideration, Telegram dominates Signal’s group chat in every way possible. Given that Signal was developed with a keen focus on privacy and security, this can be quickly forgiven.

Privacy is what it comes down to for many users, even more so if they decide which app to use for business purposes where they don’t want important information to be leaked.

After reading through our comparisons above and perhaps doing some more research yourself, you’ll hopefully be able to pick your favorite from Signal vs. Telegram.

Like we said before: there are plenty of factors to consider; it just depends on what matters most to you. Hundreds of messaging apps exist to choose from, whether it’s a slick and minimalist interface, enhanced privacy protection, or the price.

What is The Monkey Testing Method for Software Checkup?