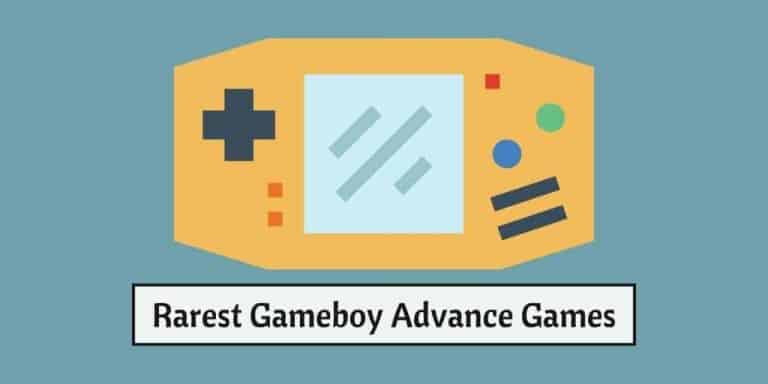 Are you also one of those people who miss some of the rarest Game Boy Advance games? If so, you’re in the perfect place.

Gameboy prices are researched quite properly and are some of those portable and affordable ranges. If you’re looking for games similar to some of the rarest GBA games.

About the Game Boy Advance Games

The Gameboy was released by Nintendo in the market. When the console hit the market for the very first time, the Gameboy was filled with one of the most endearing games.

Being an 8-bit console, it had some of the most amazing game plays across that time. Later, the Gameboy was divided into various other consoles.

Being such an important part of history, it had a lot of nostalgic memories. Along with it being released in the late 1980s, it has become a collectible product.

It was out for quite a long time, which is why it’s so hard to just forget about it.

Given below is the list of some of the rarest Gameboy games:

This is a puzzle game that was initially released in 1992. You’ve to control the potato and guide him through various puzzles to win the game.

The game follows vegetable theme adventures which allow the player to use their potato to manipulate different shapes.

It is not only one of the rarest Gameboy games, but a single cartridge can cost you $270. However, the collectible brand new copy can take you to $2,364.

Besides, if you are looking for the top girl’s games for Xbox One, this guide is just for you.

This is one of the largest games that is featured on almost every console. It was one of the rare game boy advanced games which featured similar mechanics as an arcade game.

Due to the underwhelming response in the sales of this game, a brand new copy can cost up to $250. Whereas a single cartridge of the game will cost you quite less in comparison to a collector’s copy.

This game was initially released in 1993 and is one of the rarest GBA games. You’ve to race on different tracks without getting a crash and grabbing the first position.

It had a few modes which could be selected through the start menu, among which Grand Prix was one of the favorites.

This franchise was initially started in 2000. However, the arcade version of the game started in the 1980s on various consoles like NES, Commodore 64, and Atari ST.

You’ve to make your way by battling various enemies like ogres, demons, and other ferocious monsters to rescue the princess. It’s a repayable game, and you can even get your hands on a brand new copy for $195.

This game is one of the rare Game Boy Advance games, which were the most popular ones as well. The ball physics inside the game allowed the player to curve and manage the speed of the ball manually.

Being a fast-paced game, it has quite a lot of controls to control various situations inside the game. A single piece costs $200, while a brand new collector copy will cost $1,337.

Kid Dracula is a Gameboy game that was initially released in 1993. It was specially released for gamers in Japan and North America only. This game was majorly designed for a younger age audience.

This game comes around with an interesting plot. A single copy usually costs around $100, while the collectors might have to pay $910 for the new ones.

This game isn’t one of the most popular and rarest Gameboy games on Nintendo. Instead, it’s the bible cartridge that comes along with the game. It is the unusual one, along with the rarest.

The player has to read through different verses of the bible. Only a single cartridge can cost somebody $100, yet the brand new copy cost about $262.

It was originally released in 1992 on Nintendo Gameboy. It allows the player to control a strong character, namely, Sir William.

This is one of the oldest series in the gaming world, which has been around since 1987. Even though Mega Man is quite a popular game, Mega Man V is one of the rare Game Boy Advance games.

Make your way through different terrains and fight bosses whose names are similar to the name of the planets. While a new cartridge might cost just $100, a new copy costs $2,150.

It was first released in Japan in 2000. Although it’s a part of the Metal Gear franchise, this game doesn’t belong to the main storyline of the game.

This game is featured seven years ahead in time after the release of the first version of this franchise. A single cartridge of this game will cost around $35, and the collectible one for $449.

This game is the only bike racing game on the list. The reason for being one of the rarest Gameboy games is the way the first few copies of the game were sold.

Apart from that, it gives out interesting gameplay. A brand new collectible of this racing game will cost you around $542.

This game of the Pokémon franchise was first released in Japan in 2000, and in 2001 for the rest. The price of the game of this franchise keeps on getting higher with each passing year.

To get your hands running with the newest and complete collectible copy of the game, you’ll have to pay $585.

This game is one of the rarest Gameboy games that even sold more copies than Pokemon Crystal. It still ends up becoming one of the most expensive with a price of a brand new collectible copy of $949.

The gold version of this franchise costs nearly the same as the silver one, with a single cartridge being $25.

This game of the Resident Evil franchise was published in 2001 in colorized Gameboy. It follows up with the unique concept of top-down view, which later changed into the first person while fighting.

The storyline contains two people who’re investigating the reason for the virus on the ship. The collectible brand new copy can take you up to $537.

This game was initially released in 1993. Although the game was released in Japan a few years back, it was still one of the rarest GBA games. The gameplay is quite interesting, where you defeat all the enemies using sumo moves.

This game was initially released in 2001 as a continuation of Shadow of the Ninja. It is a stealth-type game in which you’ve to kill your enemies using various kinds of attacks from your inventory.

At the end of each level, you’ll be ranked according to the time you took to finish that level. You can get your hands on a new copy for $275.

This game was initially released in 1999 in Japan and in the rest of the world in 2000. Apart from that, it is one of the rarest Gameboy games.

You’ll be sent to an alien base as an infantryman whose task is to kill all the enemies. If you wish to get your hands on the brand new collectible, you’ll have to pay $320.

This game is known as Megami Tensei Galden: Last Bible in Japan. Its game is quite similar to that of Final Fantasy games like an old JRPG experience.

In addition, you can speak with various monsters along the journey. Due to being part of one of the most popular series of Persona, a single collector’s copy’s cost is $316.

This is the first game of the Shantae series, which was initially started in 2002 on the colorized Gameboy. Apart from being overlooked by many gamers, it was still popular among some of the hardcore Gameboy fans.

This is one of the rarest GBA games on colorized Gameboy. You’ll have to survive on a desert island, and your ending and structure depend on your own decisions.

You’ll have to pay around $70 for a single cartridge. In case you’re looking to buy a brand new collectible, it’ll cost around $479.

This game is a side-scrolling game with beat-down experience, released in 1992. The game was initially released on the Gameboy, the NES, and the Sega Genesis, especially in North America.

It is quite fun to play this game where the player has to fight enemy hordes. Apart from being one of the rare game boy advanced games, it was quite a lot expensive.

This game is one of the most expensive and rarest GBA games. It was initially released in 1991 by Atlus. You’ve to blast your way through your enemies with your potato blast gun to save Princess Mato.

A single cartridge of this game costs around $200, while you’ll seriously have to pay a high price of $3,500.

This is one of the platform games which were initially released on the colorized version of Gameboy in 2001. Although the game gives out a side-scrolling experience, it still has a unique concept that allows the player to stick for hours. If you’re looking to buy a new copy of this game, be ready to spend $419.

This is a remastered version of the Nintendo Switch of this game. Though it’s not a part of Gameboy properly yet, still the prices are quite high.

Being a part of the Zelda franchise, it’s only obvious for the price to jump higher with time. The collectors can get their brand new copies for a reasonable price of $350.

This game is one of the most expensive and rarest Gameboy games which was initially released in 2001. Its limited production of physical copies was one of the reasons for it becoming rare.

The limited-edition comes with skins, pins, and t-shirts as well. By looking at its history, getting a hand on its cost is around $3,971.

From Resident Evil Gaiden to Zelda’s rarest games, we presented you with one of the most expensive and rarest Game boy advance games.

Even though “Gameboy” was released in 1998, it has accumulated tons of fan following. Don’t forget to tell us about your favorite games in the comment.

15 Best Snowboarding Games You Must Look Out For