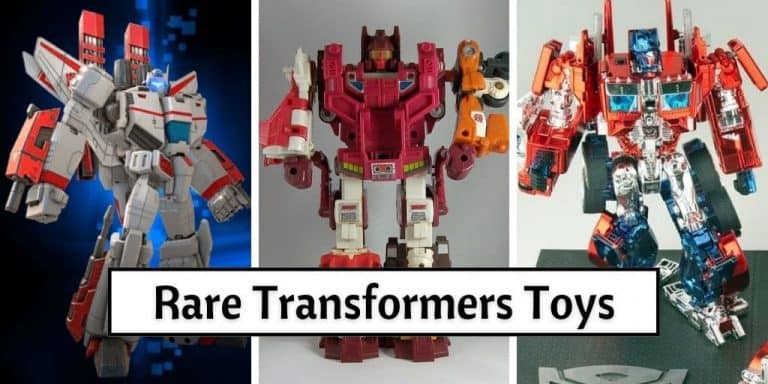 Do you love collecting Transformer’s line of toys? If yes, then this blog is for you. We have listed some of the rare Transformers toys you wish you owned.

The Transformers lines of toys are one of the most famous toys in the world. Hasbro released these toys in 1984.

They are one of the most popular toy franchises in the toy world. Before Hasbro, the Japanese company Takara planned to bring these toys to the U.S. in the 1980s, but it failed to do so.

Takara planned to release two lines of toys, namely Microchange and Diaclone. However, Hasbro hired Marvel Comics and combined both of them into a single concept.

This concept was then launched on television as an animated series, along with their toys.

Read on to learn about these rare Transformers toys.

MicroMasters are just what their name suggests. These are regular mini-robots. Dai Atlas transforms into a vehicle carrier that can run on land and water.

The comic stories of Transformers were weird, especially at the beginning of the debut of MicroMasters.

Dai Atlas is the ‘Power Master,’ which can transform into a bigger robot by combining with other micro Transformers.

The original G1 toys of MicroMasters came with a few smaller Transformers. When these micro Transformers are combined, they create big and powerful robots.

PS: let’s figure out how to get the rare candy in Pokemon Go.

This is the famous prototype version of Transformers. This preliminary model of Optimus Prime and Overload was drawn from the 2002 cartoon series Transformers Armada.

These prototype versions were created by Hasbro as test models before producing them. They are counted as one of the rare Transformers toys.

However, the plastic material used to create these test patterns was brittle, and as a result, they were not intended to be played with.

Besides, they are not packaged, and a piece of the missile is missing. Even after the incomplete package of these prototypes, someone was willing to buy them at $1,675.

The idea behind the new version of Transformers toys, which was released in 1986, was different from their previous versions. The creators added new features to it.

Some Trypticon characters could turn into bases and then connect to form a miniature city. Although it was not hugely marketed in the U.S., in Japan, it was marketed a lot by the name of ‘Scramble City.’

One of its cities was the Deception Trypticon, which was extremely popular. It could be transformed into a great dinosaur that can walk in a pair of C batteries.

Plus, you can form cannons like Brunt by combining other smaller robots with it. Its cost in mint in a sealed box can reach $2,000.

These special features of Trpticon make it one of the rare Transformers toys.

U.S.-based company Hasbro has successfully combined other Japanese lines of toys in a single concept other than Transformers. The perfect example is Robotech.

To meet the demands of people, a new property, ‘jet,’ was introduced in the Transformers line of toys.

Fortress Maximus was the most desired Transformers toy in the mid-1980s. This two-foot-tall Autobot became a base that other Transformers could use for their work.

It is one of the most expensive and rare Transformers toys. Fortress Maximus is worth $2000.

Grimlock is one of the famous Autobots and is a part of Dinobots. Dinobots has the power to transform into a dinosaur.

You can see Grimlock in Takara Diaclone series known as Dinosaur Robots. Grimlock is a very tiny Autobot and can be removed for the Transformers release.

Plus, some of the material of the Japanese version of Grimlock didn’t get approval in the U.S. because of safety reasons.

However, these little pieces play a big role in the transformation of the toys. Their price is slightly higher than $2,000. Thus, it is one of the rare Transformers toys.

It also has a Japanese version of toys known as the G1 Gift Set. This is a sister toy of Guard City and one of the extremely rare Transformers toys. It is not even available online.

TransformerLand, a Transformers fan website that keeps lists of toys and their prices, reported that a G1 Battle Gaia Gift Set was sold for $2,800 in 2016.

The package was a little crumpled. Otherwise, there was no damage to the toys.

The chief master of all Optimus Prime Transformers does not need special marketing to sell. A G1 Optimus Prime Near Mint in the box is worth $3,400.

It was professionally graded and came in a special guarded case.

However, it is not as rare as other rare Transformers toys because it is the original G1 toy and the face of the G1 Optimus Prime franchise.

They were sold a lot over the years. However, these toys have only been featured four times, and the last time was way back in 2004.

This is another exclusive set of toys from Japan. Galva-Lio Convoy was part of a hit manga series, that is, Beast Wars II.

Only 50 of them were released, which is still a high number for Lucky Draw figures. Transformers Lucky Draw is a website that shows the figures of these toys.

The website has mentioned that only four of these toys have been out for sale over the last couple of years.

G1 Beast Wars Lucky Draw Galva-Lio Convoy has been included in the list of rare Transformers toys. It was sold for $3,500 on eBay.

It has Goodbye Megatron and Starscream (his loyal friend). You can guess this product’s authenticity by Megatron’s blue legs.

This product was sold for $7440 on eBay. G1 Goodbye Megatron Gift Set is undoubtedly one of the rare Transformers toys.

Well, it’s not rare compared to other rare Transformers toys on this list, but it’s certainly not readily available in the marketplace.

We all know that BumbleBee is the most loved Transformers toy. Furthermore, BumbleBee was first introduced in 1984 and belongs to the original Transformers story.

To make this set of toys a big hit, Hasbro gave it a different angle by changing its color from yellow to red. This red version of BumbleBee was sold for a whopping $3,000.

Computron is a composite version of the five members of the Autobot Technobots group, which includes Afterburner, Nosecone, Strafe, Lightspeed, and Scattershot.

It came in graded mint in a sealed box and was sold for $5,000 in the recent past. If you are thinking about what graded means, then let us explain to you.

The chief grading company, Action Figure Authority, grades toys like Transformers between 1 and 100 ( generally between 60 and 90) on the package.

The grading system plays a big role in the price increase of these toys. Without it, the ranking of the prize might drop to $1,000 or even less.

Well, if you are looking for this version of Optimus Prime, then you should stop searching.

Released in 2007, Optimus Prime is a piece of art that was handcrafted by Hasbro for the contest held by G4TV.

If you know that, then you must also know that getting this version of Optimus Prime is next to impossible.

It is not made of polished plastic or any other plastic material. It is made of real chrome and is one of the rare Transformers toys.

This is why Optimus Prime is priceless. If it ever goes up for sale, then it will sell for as much price as any buyer is willing to pay.

The creators of Optimus Prime changed the traditional face with the winner’s face, who won a door prize at BotCon in 2007.

The creators of Optimus Prime changed the traditional face with the winner’s face, who won a door prize at BotCon in 2007.

Thus, these were some of the top rare Transformers toys. You will rarely see these Transformers toys for sale, but a few of them have been sold in recent years. Therefore, there is still a glimmer of hope for you to find them in the future.

How to Become a Professional Gamer and Get Paid?

How to Get Destiny 2 Falling Guillotine God Roll

Where to Find Crystals & How to Find Gemstones?