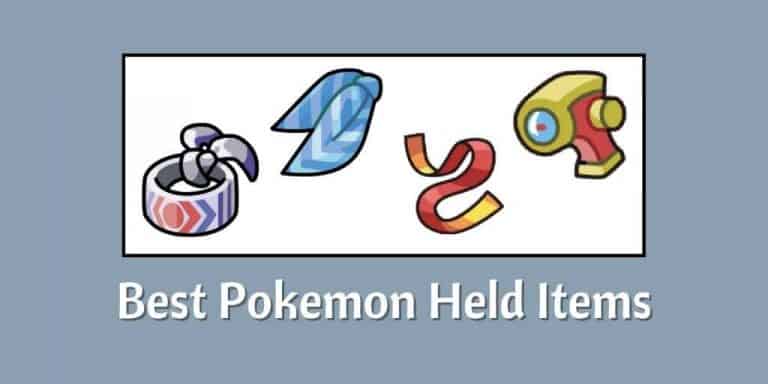 Even though in Pokemon battle, we rely on our Pokemon to determine the winner, other things will have the power to change the outcome.

Items in Pokemon battle have their advantages and disadvantages, so controlling them and pairing them up with the best Pokemon is the key to success.

If you are still lost and do not know which item will best pair up with your Pokemon and lead you to victory, here are the ten best Pokemon-held items listed. I hope this list is helpful to you.

In general, there are many lens items in the Pokemon series. Even more of it, if you count glasses as well. The Zoom Lens was introduced and brought into the game in Generation IV.

This item can boost the holder’s accuracy by 20% for targets that had already performed any action on their turn.

This means that the Zoom Lens will benefit the slower Pokemon the most, for example, the heavy hitters that can take a hit by themselves. It will also perform its use by combining it with solid attacks that have low accuracy.

Blizzard, as an example, will have a better possibility of hitting the enemy with this item. Therefore, Zoom Lens will be the first item in the Best Pokemon Item list.

PS: here is everything about the best places to play Pokémon Go for your reference.

The second item on the list is the Air Balloon. The Air Balloon was introduced in Generation V and is often a post-game item requiring Battle Points.

The use of this item is to make the Pokemon that it is used on a float in the air become ungrounded. With the right strategy and combo, this item will be super valuable.

Even though balloons do not last long like a real-life balloon; however, when used well, they can still be the key to success by giving a surprise to your opponent and avoiding the key damage dealt by them.

If you want to succeed in anything, you must be focused. Fortunately, there is an item that can help you with that in the Pokemon game, and that’s the Focus Sash.

It was introduced in Generation IV, and it has the ability to prevent Pokemon from being knocked out by one hit.

This ability can prevent the Pokemon from dying when the Pokemon has full health and a hit that will cause them to faint upcoming.

Focus Sash is a great item for the glass cannon Pokemon or any Pokemon against a disadvantage type.

With this item, the Pokemon will get 15 seconds of fame and hopefully not die in vain. Unfortunately, this item will disappear after use.

Overall, the Focus Sash is a handy item, and of course, it would be one of the best Pokemon items.

Besides, if you are looking for the best Shiny Legendary Pokemons, just read more.

Not all items are classified as gems, but these certainly are. Introduced in Generation V, Gems are the one-time items that can boost the power of any type. There are 18 different Gems currently in the game, and one for each type.

For example, when you hold a Water Gem, you can increase the damage of the Hydro Pump for one time. After that, the Gem will become used up unless used in Online Battling or Battle Frontier.

After Generation VI, only the Normal Gem can be obtained in the main series games, leaving procurement of all Gems to the Generation V games. More surprisingly, there’s one Gem introduced in Generation VI that had never been made obtainable in any way, and this interesting Gem is called Fairy Gem.

Overall, Gems are significantly valuable for combats, the increase of the damage of your power may possibly be the key to victory. Elemental Gems deserves to be one of the best Pokemon items.

The Scope Lens has only one benefit—however, no drawbacks. If held, it has the ability to increase the holder’s critical hit by one stage. This means it can be a life-saving item since critical hits have a high possibility of changing the game’s outcome.

Scope Lens is super helpful for some Pokemon, especially the ones that evolve through several critical hits in a single battle. Galarian Farfetch would be one great example.

The Expert Belt has one similarity to Scope Lens. They both have no drawbacks whatsoever. The only ability of Expert Belt is to boost the power of the user’s super-effective move by 20%. That’s a pretty significant amount.

Introduced in the game in Generation IV, it was first obtainable in Pokemon Diamonds and Pearl. However, there’s another way of obtaining the Expert Belt.

Players could go to an older man’s house on route 221, whereas the man will call out a number between 1 and 100. The player should show him a Pokemon that has the same level of that number, and the result would be the man rewarding the player with either an Expert Belt, Black Belt, or Focus Sash. All of these are valuable items.

With its beneficial ability and how easy it is to obtain it, Exert Belt will surely be on the best Pokemon item list.

As many Pokemon players may know, the battles in the game can be unpredictable, either for better or for worse. However, this “unknowness” keeps players coming back and having more battles.

In this game, five berries have the ability to heal 50% of a Pokemon’s health point if it gets below 25%. It’s essential to keep an item that can make up for a big hit with severe damage; however, it’s more complicated than you think.

Players need to know about their Pokemon very well, and that includes what kind of food flavor they like and which one they are sick of.

If a Pokemon has a Timid, Modest, Bold nature, or Calm, then feeding them with a Figy berry will lead to confusion since they dislike the spicy flavor of the berry.

Twenty natures will be affected by eating either one of the five berries( Figy, Mago, Wiki, Aguav, and Iapapa). The only exception is those who have no-stat-changing qualities at all, and those are Pokemons that have the traits of Docile, Hardy, Bashful, Quirky, and serious.

Even though it could be complicated, those berries are still one of the best items in Pokemon.

Now we are getting into the trio of exceptional items that get used constantly in battling. Choice Scarf is the first one in the trio. If held, the holder’s speed will be increased by 50%! However, they will only be permitted to use the starting move they selected until switched out.

All three “choice” items in the trio were introduced in Generation III, the same generation with Abilities like Hoenn Pokemon and Double Battles brought up.

Some Pokemon require extra speed to either make up for their weak points or to make better use of their powers.

The Choice Scarf is the best item for them. Garchomp is often paired up with this item since it has a 130 base attack and 102 base speed.

Our second “choice” item in the line is the Choice Specs. Both Choice Specs and Choice Band (the next one in line) function identically. The only difference between them is the stat they affect.

The Choice Specs will boost 50% of the holder’s Special Attack but will only permit the use of the first move selected (until the Pokemon faints or is withdrawn).

Usually, great power cause sacrifice, and this is the sacrifice for such ultimate power. Otherwise, this item will be too powerful and overpowered in the game.

Even though it has a drawback, it’s still the ultimate item that is undoubtedly very useful. It’s definitely considered one of the bests.

In this case, your first choice could be significant. Pokemon with a big advantage in Attack, such as Azumarill, can dominate the entire team using Choice Band.

Out of every type in the game, Attack is the most common type. Fighting, Ground, Bug, Ice, Poison, Dark, Dragon, and Grass types all have their Attack as their highest stat by mean. Choice Band is perhaps the most essential held item in the Pokemon game.

That’s pretty much it for the ten best Pokemon items. As many players agree, the power of items in Pokemon battles is undeniable, so selecting the best item that best fits your Pokemon is the key.

Hopefully, this list of ten best Pokemon items gives you a better understanding of different concepts in the game, as well as how to use them.

If you are a beginner, you can briefly recognize the concepts in the game and have a basic understanding of them. At last, have fun battling!

Top Games Like Baldur’s Gate, That You Must Check Out

What Are the Rarest GameCube Games?

How to Install Geometry Dash Free for iOS