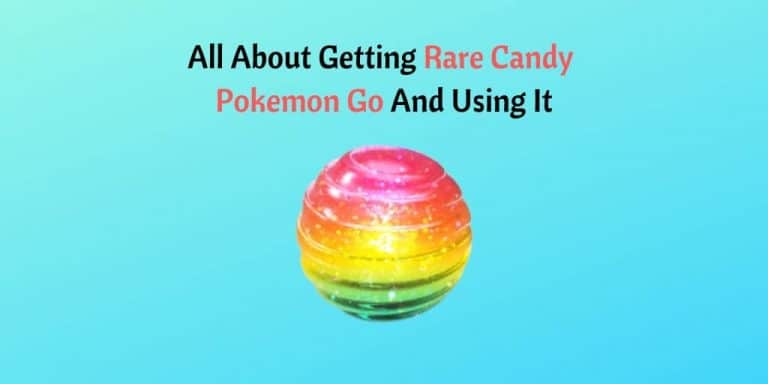 In fact, rare candy in Pokemon Go is different from the usual candy, which is specific to species. These candies can then be converted to be utilized on any Pokemon.

What Exactly is Rare Candy in Pokemon Go?

With the introduction of Pokemon Go Battle Raids, multiple new items were introduced to the game. These items are rewards that are to be won by the players. Technical Machines and rare candy are those items that come as rewards in this game version.

As another innovative advancement, players now can grab up to three rare candy if they complete some tasks. Needless to say, these Filed Research tasks are harder to play than others.

In earlier releases of the Pokemon game, the players earn candy for Pokemon in different ways. That is by hatching, evolving, walking, or simply catching it. More importantly, the candy you earned was specific to the particular Pokemon which is involved with the process.

Pokemon players know that Larviatar with Pupitar and Tyranitar or Dratini with Dragonair and Dragonite are incredibly rare. So, getting a substantial amount of candy for those Pokemon to power up can be exceptionally difficult. Such a process might take even a month or two.

Nevertheless, rare candy in Pokemon Go is applicable to any Pokemon. You can grab rare candy and convert it to whichever you like.

Besides, here are the rare Transformers toys you may hope to have.

Getting Rare Candy in Pokemon Go

Getting rare candy in Pokemon Go can be necessarily done if you win Raid Battles. Of course, you should beat Raid Boss to win a Raid Battle. Well, you should essentially team up with other Pokemon Players to beat this Raid Boss.

In fact, the Raid Boss looks more aggressive and powerful when the raid tier is high. That means, if you beat Raid Boss on such an aggressive level, you can get more rare candy.

In a nutshell, you can get more Rare Candies by winning more Battle Raids and beating more Raid Bosses.

There is another method to get rare candy in Pokemon Go. That is simply by completing Field Research tasks that are more challenging. This is a good opportunity to win rare candy for those who cannot Raid. However, the maximum number of Rare Candies you can win through this method is three.

PS: If you want to know how to catch Pokemon Go Ditto, just switch to them.

Is It Possible to Purchase Rare Candy in Pokemon Go?

Unfortunately, you cannot buy rare candy in Pokemon. However, there are ways to increase the chances of getting rare candy.

In Which Way Can You Use Rare Candy?

When you have won rare candy, you are free to use those candies on any Pokemon. The Pokemon might be of your selection. With that said, let’s see how to use them.

But if you wish to do it another way, you can do the following.

For Which Pokemon Should You Transfer Rare Candy?

If truth be told, getting rare candy and converting them is a pretty easy task. However, deciding what is to be converted is a pretty difficult task. That is particularly because there is not much rare candy with you (they are called “Rare” for a reason).

Just like every player, you might be feeling really anxious about deciding how to transfer them. All you need is to make the best use of the rare candy you already have. Even if you have managed to collect a considerable amount of rare candy, you should know how to use them.

Who are the Best Attackers in Pokemon Go?

Any player would agree that attackers are probably the most important characters in the game. Their value increases, particularly during the Raid Battle.

In fact, you would need more than 10 of them. More importantly, all of them should be lifted at least to level 30.

Well, needless to say, such a process requires a large number of Rare Candies. This is when you can use rare candy for good.

Here is the list of best attackers in Pokemon Go

But you should remember that Geodude, Machop, and Exeggute nest. So, it is better that you use rare candy wisely on them.

Who are the Best Defenders in Pokemon Go?

As of now, high-level CP tends to decay pretty quickly. So, you will need to boost their power.

Nevertheless, you should do it whenever you can afford to do so and when you really need it. You can have a maximum of 20 Gyms. However, there are some exceptions. Here are some of the best defenders.

What Evolutions Can We Expect in the Future?

As a matter of fact, you might need a lot of candies to play the next generation of Pokemon. So, it is better to keep those candies collected.

As soon as the new generation is launched, you can use them immediately if you have them.

Here are some of the evolutions to expect.

You should also consider that some Pokemon are ranging from Magnemite to Magmar to Murkrow nest. So, it is good not to spend rare candy on them. Instead, you can spend them on Gilgar, Lickitung, Porygon, or Tangela if required.

If you have any Rare Candies left even after the aforesaid preparation, you don’t have much to do. All you can do is save them for future endeavors. Also, you can consider spending them if you have any favorite Pokemon.

That means you may spend them on the coolest Pokemon just because you like them. Even if they aren’t either powerful attackers or defenders, you can use these Rare Candies on them.

Here are some clues;

That is exactly how to get rare candy in Pokemon Go and use them. We hope you liked our article. Good luck!

Top 10 Best Books Based on Video Games You Should Read

PS2 Fighting Games – The Best of All Time