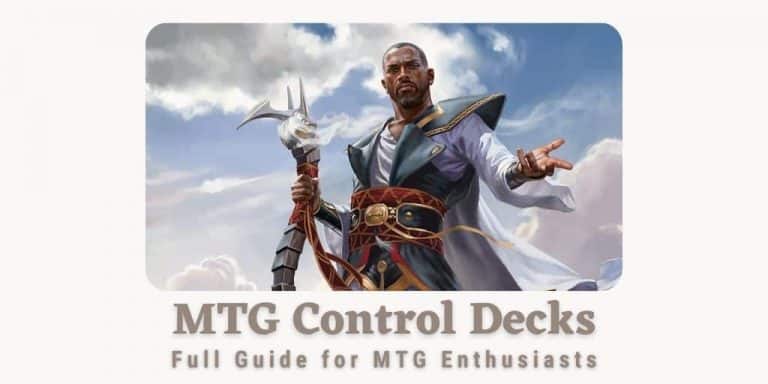 Creating the right kind of MTG control decks is an integral aspect if you intend to succeed. If you are interested in learning how to create the most effective Control Decks, go through this article carefully.

Esper Control has become a significant force in MTG Arena. This has happened as a result of introducing Teferei, Hero of Dominaria. It is true that the Esper Control archetype has very efficient removal spells with highly versatile planeswalkers.

With that said, mentioned below is our breakdown of every card found in the MTG control decks.

MTG Control Decks – What is the General Strategy?

Well, when you play control, it is inevitable to understand that you are not always in the lead. At the start, you may be behind. You are actually playing with a long game in mind. Therefore, if you come across some damage, you don’t have to worry about it. Remember that this deck is perfectly packed with removal as well as life gain. It also gives us some great sustainability as we go on.

At the beginning of the game, it is better to focus on the potential threats. That means the threats that will give you a significant advantage. With this, you can draw some spells, powerful enhancements, or even planeswalkers as well.

For instance, assume that you are going to fight Mono-Red. You can slow their momentum simply by countering the draw spells. The risk factor is one of those spells for your reference. If not, you can kill Runaway Steam-Kin, who is a creature. On the other hand, if you are fighting a control deck, you should remove its critical pieces. Teferi, Orzhov, and Search for Azcanta are some of those critical pieces you should consider.

After deploying cards like Hero of Precinct One, you can apply some pressure on the opponent. This should be done particularly if your opponent has a passive playing approach against you. If not, if they are playing the aggressive mode, you shouldn’t try to race them. Our MTG control decks cannot handle a massive number of damages in a single attack. So, you should just remove the spells on key creatures. You shouldn’t guess the capacity of those monsters by their size. For instance, Crackling Drake or Hostage Taker is very dangerous monsters.

Assume That You Hit Someone Using Thief of Sanity:

In that case, you can take one of their cards, and that won’t make a significant difference. In some cases, however, it’s necessary to get rid of critical cards from the hands of the enemy.

The goal should be to drop a planeswalker (Teferi, Hero of Dominaria is preferred) and control the entire game. Tefari has the ability to untap the lands. As a result, you can play more spells, and it is a convenient approach.

On top of that, he can put permanents as well to the deck of the owner. He also can stall the game and waste the time of your opponent. After setting the ultimate ability, all you should do is wait so it will exile the threats deployed.

This game is more about your patience and how you assess the threats as well. If you intend to smash the opponent, the best thing is to try Mono-Red Aggro. If not, you can use Sulti Midrange. But if you desire to crush your opponent’s spirit, Esper Control is the ideal option.

PS: here are the best MTG core set for your reference.

This can be rated as one of the most effective ways to win your game. It offers the board presence and the utility, which are much required to win the game. The casting cost of this creature is cheap, and it has a powerful triggered ability. As a result, it can take over entire matches. Any of the cards exiled by this creature will be placed in a face-down position. That will make your deck more unpredictable. It works perfectly against any archetype as well. This creature will also give you the advantage because it can drain the life of the opponent.

● Hero of Precinct One X4

You will be able to find only nine mono-colored spells in control decks outside the lands. That means Hero of Precinct One has the ability to produce tokens when you go ahead with the game. You can use this army to win the game. Well, the main function of Hero of Precinct is to offer a solid supply of blockers for the decks.

This is considered to be the only hard counterspell in our deck. Absorb is a perfect option if you want to shut down potentially problematic spells. It is possible for you to use this against planeswalkers, sorceries, and even instants. In addition to that, it has a three-life option that lets you pad the lives against burn decks.

Also, here are the best MTG Izzet commanders you should check out.

Chemister’s Insight is a pretty nice option, and it is used to refill our hands. It is true that there’s nothing special about four mana for two cards. However, it can give you the “jump-start” to secure the spot.

It also has eight draw spells, and it will give you plenty of answers. That will be handy if you have already drawn too many lands.

In simplest terms, Mortify is considered to be one of the most effective spells that remove enhancements and creatures. It is an affordable option, and it helps get rid of any threats on the board. However, we still recommend you play with a conservative approach when you use Mortify.

That is because your other removal spells will create lower damages, thus making it possible to remove fragile creatures. In general, Mortify is the best tool to be used against Hydroid Krasis and other substantial threats. In addition to that, it is considered to be an instant.

This is one of those spells that offer multiple choices. The first option of this spell is that it allows you to eliminate the cheapest creatures. For instance, it can eliminate Goblin Electromancer, Thief’s Sanity, Jadelight Ranger, and many other creatures.

The other option becomes useful for the purpose of bouncing higher mana-cost creatures off. That will let you stall the damage or even counter the creature at the point of recasting.

This is one of the strongest cards in MTG control decks. It allows you to take creatures out and make a blocker. In addition to that, it reduces their library and even gains some life as well. It is true that its mana cost is pretty expensive. However, it is an excellent card that can do wonders in the latter part of the game.

In some cases, you will have to clear the board of threats for the sake of the game. So, we have put one copy as we have to filter through the decks quickly.  Also, it is rare that it is needed to take the whole field. With Kaya’s Wrath, you can expect some life, so it will make it great for punishing players. You should also consider bringing the second copy from your sideboard. This is true, especially if you are playing against a creature-focused deck. This is a nice option as it gives you some life. So, it will be a great option for those who are overextended.

This option can be used to discard spells, and it is a very useful approach. The best tool you can use is Thought Erasure. With this card, you can expect to empower your opening hand. That is because the right spell can easily disrupt the game plan of your opponent. It is a very affordable option, and it lets you at the early stage of the game. It is useful, especially when mana is not so common. Also, it doesn’t require you to make a big investment. On top of that, surveil mechanics is a very handy way to explore MTG control decks.

Besides, if you are looking for the MTG Best Planeswalkers or the best MTG equipment cards, here are the best guides for you.

If you leave Oath of Kaya alone, you can gain plenty of life during the game. With the planeswalker package, your opponent will be punished if they tend to become aggressive. This is particularly true if they run with plenty of life gain. The truth is that the Oath of Kaya can swing matches even when they are left unattended. You can drop it at the early stage of the game to experience better life gain throughout the game.

You can consider this as the most flexible slot found in MTG control decks. Liliana is a solid and perfect planeswalker that has the ability to perform various useful tasks. For instance, you can use it to remove creatures, draw cards, and even present threats. The truth is that Liliana alone cannot win the game for you. But it can offer plenty of power that can boost six mana. It is also true that you will not be able to use the ultimate ability. However, Liliana still shows a great deal of usefulness in the latter part of the game.

It is true that we will lose several creatures during the match. With Sorin, however, you will be able to get them back on the battlefield. In this list of MTG control decks, you will not drain the loyalty counters at the first activation. That is because the highest converted mana cost is limited to three. He has a static ability, and it offers a lifelink to the creatures as well.

The main condition to win this deck is nothing but Tefari, Hero of Dominaria. The loyalty abilities of this card are absolutely great. It gives terrific value to your deck. When you have it, the chances are that your opponent will concede at the time it is happening. However, it is a superb way to complete the game successfully.

This should be considered a planeswalker but it works are a protection spell majorly. It lets you deny the foes, and it casts instants when they want. That is a fantastic feature to shut down the control decks. In addition to that, it can be used to hit your foes unexpectedly.

The sideboard comes with some alternate methods to deal with different types of creatures. Also, it works on counterspells or even planeswalkers. This can easily be customized depending on your requirement. However, there is a nice suit of cards already, and they can give some extra options. Also, you should remember that the sideboard works as the last set of cards to unlock the MTG Arena. You should focus on building the deck at the beginning.

In previous versions of the game, Aggro decks were so popular. They had a low mana curve, and it brings plenty of army creatures to cause more damage. They will try killing you quickly. If you are out of the creates, you can regain control using Aggro.

This could be one of the hard matchups for MTG control decks. They allow us to beat us, but that works only for a small period of time. As of now, Sulti and Bant are considered to be the most common midranges.

Take enough time and try to cast the planeswalkers if you see them trapped out of the mana. Well, this game requires you to have patience, and you can use your removal on any creature found on the board. Also, you shouldn’t let your opponents have more cards. The more cards they have, the more the answers they’ll come with.

So, that’s about MTG control decks.

Best Sega Dreamcast Fighting Games You Should Try Out

Top Games Like Baldur’s Gate, That You Must Check Out