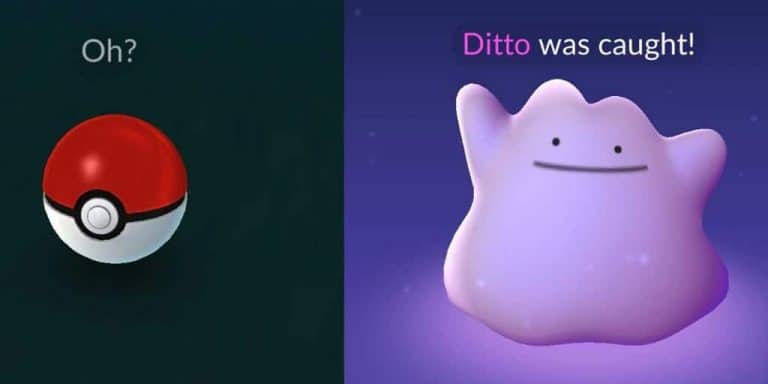 Do you wonder how to catch Pokemon Go Ditto or get rare candy in Pokemon Go? Well, the truth is that you are not alone at all.

Plenty of other Pokemon go players have yet to catch Ditto.

However, the good news is that this article contains handy information about catching Pokemon Go Ditto.

What Is Exactly Ditto In Pokemon Go?

In a nutshell, Ditto is another character in Pokemon. This special character can take the outer appearance and characteristics of other Pokemon. It is true that Ditto didn’t appear in Pokemon Go Gen 01 (which is the original version).

However, it now exists in the form of Pidgy, Zubat, Magikarp, and Ratatta. When it comes to Pokemon Gen 2, he hides as Hoothoot, Sentra, and as Yanma. He can hide as Tillow and Zigzagoon in this game’s Gen 3 version.

Well, Ditto is seemingly disappeared in the existence of Shiny Magikarp. If you have already played Pokemon, you know that you must have Ditto to find the mythical Mew.

PS: If you want to know about other Camera games, just click on them.

What Can Ditto Disguise As In Pokemon Go?

Here’s a list of pokemon characters in which Ditto can hide.

What Can Ditto Do in Pokemon Go?

You don’t need Pokemon Go Ditto just because it is very exciting; it is a prerequisite. That means you should find Ditto to complete Pokedex.

Is It a Requirement to Have Ditto to Find Mew?

As per the spring update (2018), a new quest called Mythical Discovery has been added to Pokemon Go.

As a result, the players have to catch a Ditto in its 5th phase. You should do this before moving forward to catch Mew. So, yes, it is a requirement to have ditto caught before finding Mew in Pokemon Go.

The simplest answer is yes. Ditto can surely transform into other characters in Pokemon and hide. In fact, Ditto is the only Pokemon that has the transformation ability.

Seeing Ditto on Sightings or Nearby is impossible, in other words. Perhaps it might be spawning next to you all the time until being captured.

The only way to identify that you have captured Ditto is that it greets you with an “Oh.” That is different from the familiar “Gotcha!” greeting. Well, you need to literary catch all of them to find out who the ditto is.

When it comes to the game, you can use literary to catch any pokemon and check if that is the Ditto. The servers of the Pokemon determine if the caught Pokemon is a Ditto.

Well, in a nutshell, you cannot determine if it is a Ditto or not until you catch a particular Pokemon. Once a Ditto is caught, every player who has already caught the same will be notified of it.

Gen 1. Pokemon That Ditto Would Use to Be Disguised

Let’s look at some of the common Gen 1 Pokemon characters that Ditto would use to hide.

Gen 2. Pokemon That Ditto Would Use to Be Disguised

In Gen 2, you find only three pokemon, which Ditto would use to disguise. Interestingly, one of those characters is not that common compared to the other Pokemon.

Gen 3. Pokemon That Ditto Would Use to Be Disguised

When it comes to Gen 3, there are three Pokemon that would be used by Ditto to disguise. Listed below are those three pokemon.

When you look at the list above, you might feel that it is a matter of catching common pokemon. However, you can use all those common pokemon to grind the XP regardless of whether they are Ditto or not. Therefore, don’t get discouraged by the fact that you have to catch common Pokemon.

Is There a Possibility to Catch Ditto Quicker Than Normal?

If you crowdsource the process, you can add more speed to the process. This is when your social media connections become very useful. If you have connections in the Pokemon Go community, Facebook, WhatsApp, etc., you can use them.

For instance, when you organize a Raid, you can request your connections to post their Ditto encounters. Then, you can give it a shot to find a Ditto online.

If necessary, it is even possible to create specific groups for the purpose of hunting dittos. However, it is better if you don’t spam the players that have ditto.

What is the Method to Catch Ditto After Finding It?

There is nothing special in catching a Ditto, as you already know the drill. You do it as you would do with an ordinary Pokemon. That is because Ditto hides in common pokemon.

However, in Pokemon Go, some Pokemon are difficult to deal with, contrary to your expectations. The difficulty of catching them might increase if you try to catch high-level pokemon. In that case, catching Ditto might become difficult as well.

Well, there is no exception to the usual rules. You should go for the curveballs and then stack the bonuses as much as possible.

If truth to be told, Ditto doesn’t necessarily have any nests or other spawn points. Nevertheless, don’t forget that Ditto is disguised as pokemon, and pokemon can have nests or spawn points. What we try to tell is that Ditto can be at any place where Pokemon are.

There are spawn points in certain areas, such as Gyms, Parking Lots, PokeStops, etc.. These spawn points might be occupied by multiple Pokemon. Well, this is a very productive scenario for Pokemon.

Is It Possible to Get Ditto Using Incense and Lures?

Frankly, Lure and Incense work perfectly to catch Ditto. You can consider using one or the other. Concentrating on commons (four to six) is a good approach instead of restricting to rare. Such an approach proceeds more odds.

Well, if you have a favorite route to hang, you can drop a Lure (or even some Incense). Then, wait for Ditto to come at you.

Can Anyone Catch a Ditto?

As per the mechanics of the game, everyone can catch Ditto. This is how it works.

Suppose you catch a Pokemon and find it to be Ditto (you are lucky). After that, every person who has already caught that particular pokemon will have Ditto. That means if someone finds a Pokemon to be Ditto, it will become ditto for everyone.

Well, if you intend to play Pokemon Go as a family or a certain group, let others know it. If one of the group members catches Ditto, the entire group gets it. That is a great way to ease catching Ditto faster and more efficiently.

Is It Possible to Catch Ditto in Pokemon Go Plus?

Why not? It is totally possible to catch Ditto when you place Pokemon Go Plus. All you have to do is to catch the Pokemon in which the ditto is hidden.

However, Pokemon Go Plus permits the throwing of normal Poke Balls. Remember, Pokemon can even run, and you will not be able to see if it is Ditto or not.

The Way the Ditto Works in Raids and Gyms

You should remember that Ditto comes with only one move set. Ditto can Transform and Struggle. In fact, transforming doesn’t do any damage. However, Ditto can change into the same pokemon fought.

Ditto usually takes all the attributes of the Pokemon in which he is disguised. However, some reports say that his CP may vary depending on the level instead of the Pokemon’s level.

Well, that is how to catch a Pokemon Go Ditto and proceed with your game. We hope that this article provides some useful information for you. Enjoy your Pokemon Go game.

15 Top Best Farming Simulator Games That You Must Check Out!