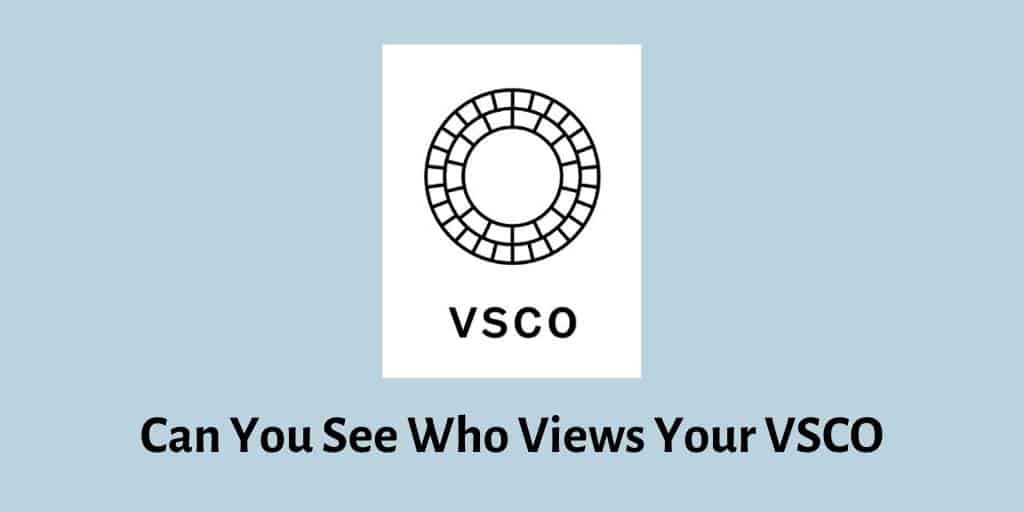 “Can you see who views your VSCO? Should you use a third-party tool to do it? Or, does VSCO has a built-in feature for that? Can someone please explain it?”

Overview of VSCO
VSCO is Special Due to Obvious Reasons
So, Can You See Who Views Your VSCO?
VSCO Tends to Maintain a Private Network
Can You Use a Third-Party Application to Do It?
Is It Possible to See Who Follows You on the VSCO Platform?
To See the Following List, You Can Go Through the Steps Below
What Makes VSCO Different? from Its Rivals?
VSCO is Mainly Focused on Sharing Beautiful Photos
Potential Drawbacks Associated with VSCO

Let us know which social media sites you enjoy using the most.

Is Facebook something you enjoy using? What about Instagram? Does it have a particular appeal for you? Have you ever used Snapchat?

Photos continue to be an integral part of practically every major social media network. This is irrespective of which one you prefer to use. People use social media mostly to share and view photos. Just because of that, everyone has a competitive need to share only the best images.

It’s good knowledge that VSCO is the go-to app for improving your photographs’ aesthetic appeal.

VSCO is Special Due to Obvious Reasons

VSCO is well-known for its ability to apply spectacular filters and effects to user-submitted images.

Thanks to this ability, even the most amateurish snaps will look like they were taken by a professional. As far as web-based video and image editing tools go, it ranks among the best.

However, there’s one thing that makes VSCO stand out from other photo editing tools. With this tool, you can share your edited photographs with the world.

The website is more than just a simple photo editor. This is specifically because it gives its members a public forum to exhibit the results of their artistic efforts.

With that said, can you see who views your VSCO photos? If you have this problem in mind, you can consider this article as a guide. So, keep reading and learn more about this matter.

So, Can You See Who Views Your VSCO?

In other words, Facebook or Instagram cannot transform even the most boring photos into works of art. Well, VSCO offers both, and the unique combination of design tools and social sharing capabilities sets it apart.

In contrast to other social media sites, however, VSCO offers a high degree of discretion and interaction. So, the quick answer to your question is “no.” You can’t check to see who viewed your images.

Besides, if you wonder how to find out who unfollowed me on Facebook, actually yes, with some extensions (like Who Deleted Me), you will know the truth.

VSCO continues to be a relatively private network that places more emphasis on sharing photographs than forging relationships.

This is interesting compared to the proliferation of hundreds of social media sites that prioritize user interaction. It is possible to show off your photographic skills to others.

However, you cannot monitor who has viewed your images. The same holds true for the images. It gives you the option of viewing as many as you like. On the other hand, the original uploaders will never know who looked at their work.

To anyone who has used any other kind of platform before, this will seem completely standard. It’s not possible to see who viewed your postings on even the widely used social media platform Instagram.

Can You Use a Third-Party Application to Do It?

In some cases, conventional approaches become ineffective. So, it is not uncommon for users to turn to supplementary software for assistance. If you’re having trouble with VSCO, not even other services can help.

This is due to the fact that VSCO doesn’t record user information in a central repository. As a result, you will not be able to learn this information from any external platform.

Is It Possible to See Who Follows You on the VSCO Platform?

After receiving two unfavorable responses, this one offers some cause for optimism. YES. VSCO allows you to view your follower count in real time. This is the only way VSCO gives you any idea about how your photographs are publicized.

In other words, it gives an idea of how your photographs are being received by the general public.

To See the Following List, You Can Go Through the Steps Below

What Makes VSCO Different? from Its Rivals?

VSCO’s distinction goes beyond the superficial lack of a “who saw your photo” function.

The service has avoided including a number of features that are standard on competing networks. You can’t give a thumbs up or leave a remark on any picture you view.

You, the viewer, have the option of “favoriting” a given image and “reposting” it if you find it appealing. However, neither words nor likes can be used to convey your feelings about the photographs. Don’t you think that’s a little out there? That’s true.

Nonetheless, that’s how things are because of this or that. VSCO does not want its users to think of it as just another social network. The fact that these tools are geared toward photo editing reinforces the exact purpose of this program.

VSCO allows you to upload photographs you’ve edited in any way you see fit. However, preferences are unnecessary.

In fact, VSCO is a great way for artists and photographers to share their work. Artists don’t necessarily have to worry about whether or not other people like it.

However, the same feature is especially important in the era of Facebook, Instagram, and TikTok. Image effects, background colors, and saturation can all be easily adjusted. On the other hand, the final product is stunningly edited photographs ready for instant sharing.

It’s quite possible that this is the reason VSCO is more popular than ever. After all, taking a vacation from the constant barrage of comments and likes is healthy for everyone. VSCO has indeed been giving us that respite for a long time.

Assume that you’re a photography enthusiast who just wants to take a vacation from social media. And what if you want to relax while looking at pretty pictures? If that’s the case, VSCO is the app for you.

You can do amazing things with images using the VSCO application and share them with the world. However, it isn’t a particularly engaging platform.

Your photo views and likes are hidden from other users. You can share your edited and uploaded images with the world.

However, you have no idea who is looking at them. In fact, the site doesn’t even let users comment or like each other’s shared images. In comparison to other social networking apps, VSCO stands out for its unique features.

So, can you see who views your VSCO? No, you cannot. What do you think about this specialty? Is it good or bad? We would love to hear from you.

[WORKING] How to Know If Someone Blocked You On Discord?

WhatsApp Sexting – Every Parent Must Know What It is