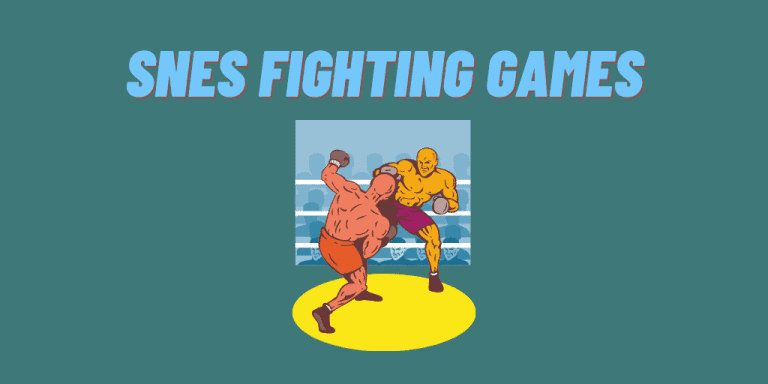 What Are SNES Fighting Games?

If you are a gaming enthusiast, you already know what SNES means. For those who don’t know, SNES is the abbreviation for Super Nintendo Entertainment System. It is also called Super Nintendo or Super NES. Basically, it is a 16-bit console that is used to play home video games.

This console was introduced by Nintendo. The initial release of this gaming console took place back in 1990. That was for Japan and South Korea. In 1991, it became available in North America. Europe and Oceania were able to experience this console in 1992. And, this console was officially released for the South American region back in 1993.

PS: here are the best Dragon Ball Z game for your reference.

There is no shortage of SNES fighting games. In fact, the Super Nintendo console was very popular because of the massive number of fighting titles. Some of those games didn’t become popular, but there are some awesome games that became hits. Fighting games are surely among the most popular genres that are played on SNES. Because of their popularity, a large range of experimental games was introduced. Those games became incredibly popular, and they helped the concept of fighting games to become iconic.

With that said, we have prepared a list of the best SNES fighting games for you. If you are interested in these types of games, this list will be handy for you. So, keep reading and pick a game for you.

In this edition of the Mighty Morphin Power Rangers game, you will have to fight as a Zord. That is, instead of fighting as a Ranger. There are plenty of large mechs in this game as city buildings. You can either choose to go with the Thunder Megazord or the Mega Tigerzord found in the Story Mode. During the gameplay, you will have to fight Ivan Ooze as well. He is the main antagonist who lives in the movie, and he is so broken. All in all, this is considered to be one of the best SNES fighting games.

Also, here are the best PS2 fighting games for your reference.

This game was developed by Rare. It uses some pre-rendered graphics that became popular with the game called Donkey Kong Country. In fact, Donkey Kong was too developed by the same company. Killer Instinct focuses majorly on building massive combos that have characters with outlandish features. There are finishing moves that let you play some of the moves from Mortal Combat. However, some of those moves are brutal, and some of them are pretty ridiculous to any gamer.

It is true that there are many individuals who know of the beat-them-up game version of Turtles. However, only a few players are interested in the one-on-one fight version of the same game. This game is one of those not-so-popular games for you. Well, when it comes to fighting, you have two options. You can either fight as one of the Ninja Turtles or one of the foes. The game is based more on comics instead of television shows.

The battle of this gameplay happens in a very familiar setting for any gamer. Each of those characters should be controlled differently using those specials each of them owns. In addition to that, this game is released for consoles like Nintendo Entertainment Systems (SNES) and Saga Genesis. However, both of those releases come with some different characteristics compared to the Super Nintendo version.

It is true that there were plenty of anime games introduced to the West during the 90s. However, only a few of those series became successful due to various reasons. Pokemon and Sailor Moon, to be frank, are among those popular games for sure. The Sailor Scouts became incredibly popular in the West. In fact, they became more popular than their country of origin as well, which is quite an interesting fact. That became available with nine SNES games that are exclusive.

Sailor Moon S falls into the genre of 1-on-1 fighter. As per the gameplay of Sailor Moon S, you will play as one of those Sailor Scouts. Each of those Sailor Scouts comes with different statistics as well as unique individual moves. However, this game has significantly broken characteristics and various mechanics to make it a more unbalanced game. Interestingly, in some cases, blocking can be more harmful compared to attacking.

Mortal Kombat 3 is considered to be one of the iconic SNES fighting games due to several reasons. In fact, it is the series that brought various characters to this type of game. Kabal, Sektor, and Cyrax are only a few of those characters. In addition to that, this game comprises a run button too. That can be used to close the distances between you and the opponent and continue attacking. On top of that, there are several chain combos to be used multiple times.

You may already know that there are various Dragon Ball Z fighting games released for the SNES gaming console. However, most players know Super Butoden Trilogy only. Surprisingly, they tend to ignore Dragon Ball Z: Hyper Dimension due to some reason or another. This game has visually appealing characteristics compared to other games of the Dragon Ball series. Also, Hyper Dimension comes with a longer storyline. That is focused more on the Dragon Ball Z story. It starts from the Frieza saga and runs all the way up to the Buu saga.

Dragon Ball Z: Hyper Dimension was initially released in 1996. It was released for the Nintendo. Because of the same reason, Hyper Dimension comes as a graphical showcase for the console. It has very impressive animations with excellent detailing. Also, the background of the game is very impressive too. The Frieza’s transformation and its pre-fight is a very good value addition to this game.

By the way, if you are searching for the best games like Summoners War, these are the best guides for you.

One of the most noticeable characteristics associated with Gundam Wing Endless Duel is its excellent mechanics. It allows you to play with a one-on-one approach as well. This specific entry is considered to be one of the best SNES fighting games for several reasons. However, this game is limited to Japan only. Moreover, it is among the best 16-bit SNES fighting games that receive hardly any attention from gamers.

In this game, you will find plenty of colorful sprites that fills almost the entire screen. Also, it has fast action and a little amount of slowdown.

When you battle as per the gameplay, you will see massive mechanics in the game. You will start to see that you are up against the massive robots in the game. That is specifically because of the camera-shaking effects as well as the perfect sound designs.

This game was introduced to you by Sunsoft and Blizzard. If you remember, this is the same company that developed popular games such as Diablo. It also developed games like World of Warcraft and Overwatch. With that said, Justice League Task Force is considered to be a Super Nintendo version of the game Injustice. That is because it allows you to play in the form of different members of the Justice League. For instance, you can play Wonder Woman, Super Man, etc. If not, you can even play as a villain (like Desparo or Dark Seid). So, the variety, uniqueness, and aesthetic values are amazing.

Every single battle in this game takes place in a different type of setting. These settings are the ones you have seen in various comic books like Gotham City, Metropolis, and so forth. In addition to that, it has a story mode so you can enjoy a personalized intro for each character.

This game is known specifically for the tight gameplay it has. On top of that, it has a very large collection of characters. Those characters come with vastly different characteristics. They also come with many different iterations, which are much better than the first game.

So, those are the best SNES fighting games we listed down for your reference. Do you know any other games worth mentioning in this list? If so, please let us know so we can include them.

Top Rare 3DS Games That You Would Love to Try