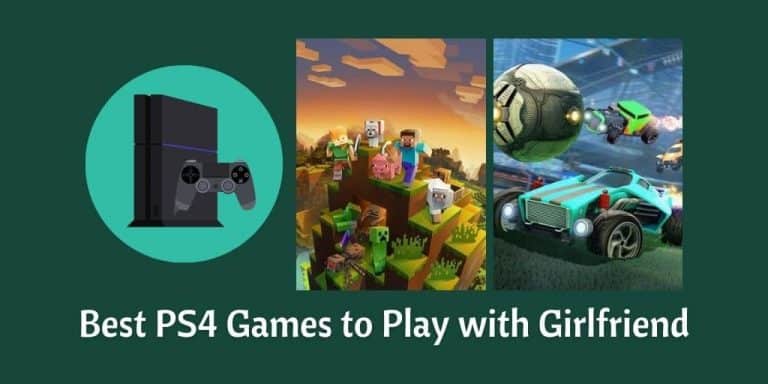 We all love video games. Isn’t it? A significant amount of the population is rapidly adopting video games as their major source of entertainment.

Without any doubt, you can use them to strengthen your bond with your partner. It’s just like you are sharing your hobbies.

Read on to learn about the best PS4 games to play with your girlfriend.

This co-op game is quite competitive and is one of the best PS4 games to play with a girlfriend. Its competitive action makes it exciting.

Moreover, you can showcase your phenomenal gameplay and help to improve your girlfriend’s gameplay if she is new to it.

PS: here are the most popular best 2-player PS3 games for your information.

Although Telltale Games are not multiplayer games, you can still try these PS4 games to play with your girlfriend.

They include games like Batman, The Walking Dead, and Game of Thrones. Work as a team, get to know different stories, and make collective decisions to win these games.

Besides, here are the best crafting survival games on PS4 you should check out.

Two inmates are locked in a prison, and they collectively make strategies to escape. You and your partner are these two prisoners. The gameplay resembles the Telltale Games to some extent; however, you will have a lot of direct interaction with your partner.

Use your analytical power and free your partner and yourself from prison together. It is one of the most enjoyable PS4 games to play with a girlfriend.

Jackbox Games are one of the most fun PS4 games to play with a girlfriend and others. The package is a collection of five different party games. Plus, you can play these games even if you only have one PS4 controller.

Other players just need to connect their smartphone to a PS4 device, and then they can continue to play. These games are quite amusing to play with your loved ones and friends.

This game might seem a bit complicated if your girlfriend is not experienced in video games. However, if she is a bit familiar with PS4 games, then you should definitely try it out together. It is a highly competitive co-op shooting game.

Along with playing different characters, you will also get your hands on different weapons and other artilleries.

It is a shooting game but with less intensity as compared to other PS4 games for girlfriends on this list.

There are many players who consider Minecraft as a kids’ game and brush it off. However, there is a world of difference between the original Minecraft game and the updated one.

From building your own house to finding different resources to avoid your enemy’s attacks, you are required to carry out a lot of different tasks together.

It provides you with endless possibilities in different modes of gameplay. This is one of the best adventurous PS4 games to play with your girlfriend.

If you are tired of playing a player vs. player game and losing to your partner, then this co-op game is right for you.

Diablo 3 is a story-driven action-adventure game that you must try with your girlfriend. Select the number of players (maximum 4) and game mode and use your abilities to win the level.

Your ultimate mission is to finish the devils and save humanity. The strong storyline, powerful characters, and hardcore combat will indulge you fully in this game. Plus, it is one of the most popular open-world PS4 games to play with a girlfriend.

Besides, if you are a fan of the most popular games like Diablo 3, just click to read more.

This collection includes limited versions of Borderlands: The Pre-Sequel and Borderland 2. It allows you to play with four members, where you try to bring down the antagonist Handsome Jack.

This sandbox game includes strategic and powerful gameplay to defeat the enemy. As your enemy gets stronger, you need strong teamwork to stop him. This might be one of the best collections of PS4 games for a girlfriend.

Also, let’s learn more about how to get Borderlands 3 Conference Call easily.

It is a multiplayer game where you and your partner have to fight against the monsters. This series was recently released on PS4. The original game came out more than a decade ago, in 1993.

Although the game’s graphics are outdated, its combat style is nothing less than today’s action games.

And, despite its outdated visuals, it managed to entertain the audience. The 2016’s installment of this game impressed its audience with various elements and functionality.

And Doom Eternal, which was released in 2020, made fans go crazy. If you also want to go crazy, try these PS4 games to play with your girlfriend.

Overcooked is a cooperative game that includes both emotions, fun as well as frustration. A maximum of four players can take part in this game.

Your mission is to serve food in a kitchen at a given time. Do not get bluffed by its simple plot because you will not serve in a regular kitchen but in a hot-air balloon kitchen.

Try this game out with your partner and test your coordination skills. It is quite relaxing and adventurous if you and your partner have a mutual understanding. All the games of the Overcooked series are exciting PS4 games to play with your girlfriend.

And here are more games like Overcooked 2 for your reference.

It is undoubtedly one of the most enjoyable PS4 games to play with a girlfriend. As the name suggests, you and your partner need to sing karaoke or play various musical instruments to win. You need to work as a band and jam together as a team.

The best part is that no one is a loser in Rock Band 4. Music and game combos can do wonders. You must try this game out with your partner.

Playing horror video games is a great idea for a perfect date, much like watching horror movies.

The best part is that an unskilled player can choose the character of Natalia or Moria Borton, which does not include much activity. At the same time, the other player handles the stress of survival in the haunted place and finds a way out.

However, the theme of this co-op game is asymmetrical. Whether or not you are with your partner, you are responsible for your own life and death. This is one of the most exciting survival horror PS4 games to play with your girlfriend.

Man of Medan is another co-op drama game of The Dark Picture Anthology, which was developed by Supermassive Games.

The first installment of this game came out in 2019. They took some references from Until Dawn reviews and added different paths to progress in the story.

You can play this game over the internet or on one console. Your survival is based on the decisions you make together with your partner, and therefore it is important to have keen eyes on every detail you come across in this game.

WipEout Omega Collection will make you nostalgic as these video games were released early on the PlayStation console. If you have been active in the game field for a long time, then you must’ve known about the WipEout game.

This is a futuristic race game that is unfamiliar with the law of gravity. With your girlfriend, you will be racing against several other players on a high-speed vehicle.

This collection comprises remastered versions of WipEout 2048, WipEout HD Fury, and WipEout HD. These are simple and entertaining PS4 games for your girlfriend.

If you love to watch superhero movies or read comic books and want to try such story-based PS4 games to play with your girlfriend, then Injustice 2 will surely do justice to your taste.

It is a player vs. player DC universe game. You will get a chance to virtually embody your favorite character and combat with your opponent.

From Superman to Batman, Deadshot to Wonder Woman, and Joker, you can get your hands on various characters.

Use your character’s abilities to your advantage and showcase your phenomenal gameplay to your opponent. These are some best action-packed PS4 games to play with your girlfriend.

As the name suggests, Hidden Agenda is a co-op game in which, together with your team, you need to find and capture a Trapper Killer. Sounds simple.

But, here is a twist. You can either play together to catch the Trapper Killer or have your hidden agenda and work against one another. You can play solo as well.

A maximum of six players can participate in this game. This is one of the most thrilling and exciting PS4 games to play with your girlfriend.

So, these are the 16 best co-op PS4 games to play with your girlfriend. Try these games and spice up your relationship.

Set some couple goals that will inspire other couples to give them a shot. You can also play these games with your friends.

What Is The Biggest Pokemon In The World