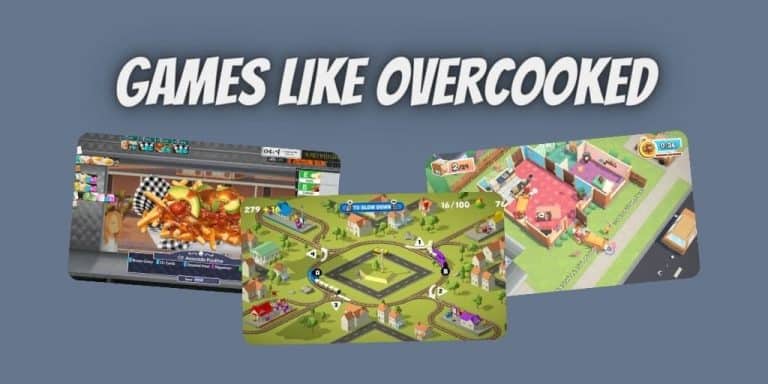 There are not too many games like Overcooked 2; local co-op games seem to be getting lost amongst the various types of games in the market today. Overcooked 2 is a fast-paced co-op multiplayer game that can be played along with your friends. However, do not let the name fool you – this cooking-based game will test every aspect of your mind and can be stressful.

While the game is a bit chaotic, it is also quite fun if you can figure out strategies for every level. If you are looking for games similar to Overcooked, this is the right article for you.

What Are Some Games Similar To Overcooked?

If you are looking for games similar to Overcooked, then Cook, Serve, Delicious! 3?! Deserves a top spot. This game has been developed by Vertigo Gaming Inc and consists of everything that you see in Overcooked 2. This game has a very fast simulation and can be played locally and or with your friends.

In this game, you will gain a full food service experience of a restaurant; right from mad rush hours to impatient customers; the game is exhilarating and stressful. However, this is not even the most chaotic part – you will have to divide work with others while maintaining top-of-the-line service. If done right, the game can be quite satisfying.

If you want to get angry at your teammate, then Clubhouse Games: 51 Worldwide Classics is a great choice. Yes, this is also one of the games similar to Overcooked and will offer a gaming experience made for all types of gamers.

While most of the games in this list are multiplayer games, Clubhouse Games heads back to the basics. There is nothing more frustrating than losing in Four-In-A-Row or drawing endless cards in The Last Card.

Also, click here to try the best Nancy drew games ranked and the best PS4 games to play with your girlfriend.

Developed by Mediatronic, Fall Guys went on to become one of the most popular games of 2020. Almost all other games like Overcooked 2, Fall Guys is about 60 bean-like individuals that compete in challenges similar to Wipeout! to win the coveted crown. While the game is simple, it is fun nonetheless.

While the number of players that can play in one go is limited, you can still co-op play with your friends and have fun. Winning or losing, this game is very exciting to play.

Mafia can be considered one of those classic games where you battle against your friends for unknown rewards and adversaries. While this concept has been in use for many years, Mafia has managed to take it up a notch higher. The third installation, Among Us, has been deemed as the most interesting one yet. It is definitely one of the games similar to Overcooked.

Keeping the normal Mafia gameplay constant, Among Us will offer players different types of tasks to fulfill. You have to look for ways to sabotage and destroy other players. Due to this, the game becomes quite intense. In fact, many friendships were destroyed playing this game.

As you may have already guessed by the name, Pummel Party is all about using strange weapons and objects against your games. It is not unlike other games similar to Overcooked. However, you play against your friends, instead of with each other.

The game can be played against a maximum of eight players. This game can get you and your friends screaming at one another. If you want to play this game, it is currently available on Steam.

If you are looking for more relaxed games like Overcooked 2, then you can try out Snipperclips. This game was released for Nintendo Switch as a co-op game where two players need to work to solve logical puzzles. To do this, they need to spin the paper bodies of one another. While the concept is quite simple, you need to apply creative logic that will keep you engaged.

While this game is not as chaotic as Overcooked, it will offer a mild thrill that can make you or your partner a bit frustrated. Of course, the angrier you are, the better you will play the game.

When you look from afar, you may not find a lot of similarities between Overcooked 2 and Joggernauts. However, on closer inspection, you will find that it is one of the games like Overcooked.  Developed by Space Mace and Graffiti Games, Joggernauts is all about juggling multiple tasks, pacing up and down, and playing in co-op mode.

With the help of color-coded avatars, progress through the levels. If you mismatch the colors, you will die in a pitfall. This is quite an innovative puzzle game where you have to coordinate with other players.

One of the games like Overcooked, 39 Days To Mars, is a hand-drawn puzzle game. It has laid special emphasis on the multiplayer aspect and consists of some inventive puzzles that you need to solve to progress to the next level. As you keep solving the puzzles, you will repair your steampunk ship in the process.

While the campaign may seem small, you may need to think ‘out of the box’ to solve these puzzles. The faster you solve the puzzles, the more time you will be able to spare for experimenting. Like Overcooked, the likeliness of success increases when you play with others – however, you also have the choice of playing solo.

If you are looking for something more humorous, the Human Fall Flat is an exceptional game developed by No Brakes Game. This is one of the games like Overcooked 2 and has many puzzle-based games. If you notice carefully, you will see that the avatars are doughy figures.

As players, you are in control of these avatars. The physics in the game is extremely weird, which makes the game quite hilarious and challenging as well. You need to mess around with the contraptions and platforms that will take you to the next level.

PS: here are the best Nintendo Switch PUBG alternatives for your reference.

If you are looking for games like Overcooked, then you can try out Moving Out. This game will take up the laborious job of moving out and turn it into a thrilling and fun experience. This game has been categorized as a moving simulator game and has arcade-styled gameplay.

Different players need to work together to move various furniture and items into a moving truck. You need to be skilled in maneuverability and speed. If done right, Moving Out can be quite a thrilling co-op game that you can play with your friends.

Tools Up! game, developed by Knights of Unity, is one of the games like Overcooked 2 and is related to baking and cooking. While the motifs between the two games may vary, both are very similar in a lot of ways.

While the game is a bit rough around the edges, getting different types of tasks done like moving the furniture and tearing down the wallpaper with your friend can be fun. Another difference between Tool Up! and Overcook is that you can play alongside your friend instead of against.

One of the games similar to Overcooked, Surgeon Simulator 2 is an arcade-style game that has very frantic gameplay. A lot of gamers have stated that they have completed the tasks only after fumbling in the first few attempts. While Overcooked 2 is about dealing with hungry and impatient customers, Surgeon Simulation is about tricky surgical procedures where you have to deal with the situation very precisely. This makes the gaming experience very unique.

The Surgeon Simulation 2 is a steep more difficult than its predecessor in terms of gameplay. Additionally, the story mode is quite immersive. Similar to Overcooked 2, the visuals and animations are cartoonish.

Castle Crashers is a simple 2D arcade game that has received a lot of positive reviews online. One of the games like Overcooked, Castle Crashers, can be played with four friends. The aim of the game is to defend your kingdom, save the princesses, and destroy other castles together.

Overall, this game is quite cute and quirky. You will also find a lot of unlockable content that should provide enough fun for you and your friends.

If you are looking for games like Overcooked 2, then you can try out Conduct Together! This game is about completing a job in demand within a set time frame. Often described as a ‘party railroad game,’ you need to navigate trains and complete the tasks amidst the chaos surrounding you in this fast-paced arcade game.

The players will be forced to shift their attention from one point of interest to another quickly since the trains are all headed in different directions. Your goal is to pick up commuters and avoid hitting one another.

15. Keep Talking And Nobody Explodes

Keep Talking And Nobody Explodes is considered a perfect game that you can play with your friends on various devices like PC or mobile devices. Of course, this game will be accompanied by a lot of screaming.

These are some of the games similar to Overcooked. Most of them are arcade games and can be played with your friends. While the games may look boring on the outside, these are quite fun and will keep you and your friends engaged for hours!

Top-Most 11 Best Switch RPGs That You Must Consider

Stardew Miner or Geologist: Which Profession is Better?