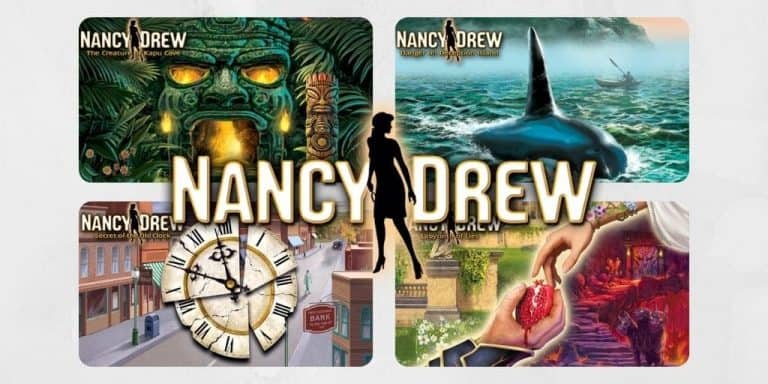 Nancy Drew has been a fascinating series with lots of mysteries and puzzles. The fans are even more interested in the series as it is somewhat based on a different concept than the usual mystery series.

If you are a person looking for some new exciting stories, then Nancy Draw is the series to go for. However, this is not up to the series as the creators provide their fans with interesting Nancy Drew games too.

There are a number of the best Nancy drew games ranked that have been a big attraction for gamers.

In this article, we will tell you about some of the fascinating Nancy Drew games. In the world of male domination, Nancy Drew has something unique to give the female lead in a Mystery thriller, so it has always been exciting to witness Nancy Drew.

Here in this article, we will tell you about some of the best Nancy Drew starting games that were a huge success. All these games have been appreciated by people throughout the world, and Nancy Drew lovers found all of these amazing as they came closer to their favorite character Nancy.

1. Message In A Haunted Mansion
2. Midnight In Salem
3. The Shattered Medallion
4. Danger On Deception Island
5. The Secret Of The Old Clock
6. Ghost Dogs Of Moon Lake
7. The Creature Of Kapu Cave
8. Ghost Of Thornton Hall
9. Warnings At Waverly Academy
10. Labyrinth Of Lies
Conclusion on the Best Nancy Drew Games Ranked

1. Message In A Haunted Mansion

There are lots of other games out there based on the concept of a  suit that is haunted. We also have witnessed many stories and fiction related to the idea.

But HeR Interactive made this game a lot more creepy than usually a game on such a basis is expected to be. Most probably, this was the reason why it gained attraction and became one of the best nancy drew games ranked.

People loved the mysterious plot and the effects behind everything to make the story interactive. It involves solving mysteries with unique codes and finding the exact cause of the paranormal activities in the suit.

The special Victorian decor makes it even more amazing to experience. You also get lots of the characters in the game, making it all sketchy.

PS: here are the best Monster Taming games on PC for your reference.

We just can’t keep this one out of the list when we are talking of nancy drew games ranked. To be honest, the company tried to change a lot in the game, which actually disconnected a few people from the original Nancy Drew concept.

But on the other hand, this is probably the best game we have witnessed with regard to Nancy drew. The graphics are the main attraction which the gamers can look for. You also will get a great voice change on the actual characters.

Even the game is very much interactive. Gamers get an option to interact with different objects during the gameplay. However, many fans did not appreciate the fact that the original actress’s voice was changed in the game.

But if you want to experience gaming at its best along with Nancy Drew, then nothing is better than Salem.

If you are looking for a nancy drew game ranked that is all about tricky puzzles, then this is the best one you can go for. To be honest, the game lacks a lot of story-building.

You expect that a mystery game would take you through a line of series, making an exciting story as the real Nancy drew Series, but the gameplay lacks it.

On the other hand, it comes with a hell of a lot of puzzles and mind teasers. You Can never expect to go through the puzzles easily if you are not one who likes to frisk their minds.

The gameplay is slow, but it is something that can be interesting for people who love mind teasers. So it is not the best of them, but it is a game that people can enjoy spending time on.

Now, this was a game certainly out of the box for people who were following the Nancy drew series games. It was the ninth game that the HeR interactive introduced in the series.

In the gameplay, Nancy Drew takes up a case about staying stateside. It is one of the best nancy drew games ranked, as you don’t expect a character like nancy drew to solve such a case. It includes Nancy receiving a threatening note, and each step of the mystery is perfectly made up.

Even the players get a chance to go for orca-watching in the game. It was a balanced game if we talk of story and buildup.

But on the other hand, many Nancy drew gamers thought it to be a concept very much connected to the original series. Nevertheless, the game is an absolute wonder.

5. The Secret Of The Old Clock

If you are a fan of the early 1900s, then this game is the best choice you can make. The game was set up in 1930 with a lot of references from the great depression. It takes the gamers to a very old pace with lots of mysteries.

The game is designed very precisely. You will love the detailing one can see in the game. The setup of Lilac Inn is one of the best features you will find in the game.

While playing the game, it will feel like you really have traveled back in time. There are many games that are claimed to be the best nancy drew games ranked, but to quote a name among the top 3, this one will surely be on the list. The music in the game is also a pure class of art.

The Ghost Dogs Of Moon Lake is a game that needs to be played at night. It is a spooky game that has a lot of mysteries for you to discover.

The game is not like the other one; it is moreover a very serious game with serious gameplay. If you like things on the lighter side, then you might get detached from the game. The gameplay is very creepy.

As the name suggests, it is all about Moon lake. The story keeps on revolving around some serious events that happen around Mickey Malone and his dogs. The graphics regarding the game is nice.

7. The Creature Of Kapu Cave

Are you a fan of Hardy boys? Then this is a game you need to try. The Creature of Kapu Cave is very interesting, and a fab combination of hardy boys with the Nancy Drew game. If you are looking for many challenges, then this might disappoint you.

The game is all about some tricky puzzles and mainly hardy boys rocking the platform in the form of a game. There are many activities in the game you need to perform teaming up with the hardy boys.

Basically, this nancy drew game ranked is all about the fan connecting link. Moreover, it is a game to enjoy and play without a lot of trouble.

The local Jessalyn Thornton is missing! It smells like something haunted out here. It is time for Nancy Drew to investigate the case. The game talks us back to the basics of where the concept behind the entire series started.

There are many lively characters in the game, which makes it even more interesting. Not only does the boy get missing in the game, but there are regular episodes of haunting with the family.

The game is designed brilliantly, and one wrong click can change the complete scenario. It is a modern game with high graphic quality.  At every stage, you will get a number of puzzles to solve.

The game sets up the theme very smoothly, and all you get is a wonder of modern tech combined with classic Nancy drew. Puzzles are one of the best features of the game.

The game is set up in a boarding school. You can have Nancy as a teenage detective in the game. To investigate things smoothly without creating suspicion, she also joins the school and has to complete homework and assignments.

The gameplay is too good, and a Nancy fan will like playing it. It is a classic game involving a lot more than mysteries. You will get a blend of school life, relationships, and much other such stuff.

If we talk of overall performance, one cannot deny the game to be one of the best nancy drew games ranked games. You will get regular reinvestigations and crime scenes in the game.

It is more interesting to see the gameplay than rushing into the mysteries. The story takes smooth turns, and you will need to live the character to have the best experience with the game.

Labyrinth of lies is exactly what you think after seeing the name. It is a game on the white-savior hood zone that is much far away from the natural region of Nancy Drew. But guess what, she can never let you down in any circumstance.

The game is all about her adventurous journey to solve the case. Nancy is seen helping a museum with getting started. To attract more crowds, the museum decides to put on a special play, but one of the artifacts goes missing.

Nancy investigates the case and tries to find the best possible answers to the event. The game attracted a good number of people, so we can say that it was amazon the most successful one in the market.

It has always been a pleasure seeing Nancy, with her young look struggling hard and making the best of clues to find out the mystery.

For a decade, Nancy Drew fans kept on growing, and now these games are the new way to directly live the life of Nancy Drew. Every game in the list above is different from the other.

If you are one of the hardcore Nancy Drew fans, trying these best Nancy Drew games ranked is a must for you.

Top Best Anime Board Games in 2022

[FIXED] Minecraft No Sound on PC

Best Gwent Cards: The Most Promising Ones in the Witcher 3