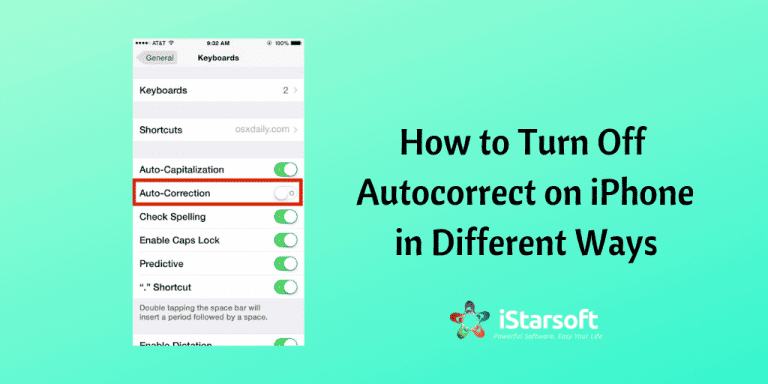 Auto-correction can sometimes be frustrating in iPhones as it corrects out wrong phrases and words.

If you want to disable the autocorrect feature on an iPhone but are not sure how to do it, this article could be really helpful to you.

Here, you will get to know how to turn off autocorrect on your iPhone so that you can type whatever you want without worrying about your phrases being changed automatically.

What Does “Autocorrect” Mean?

Autocorrect is one of the great features that one gets in phones. It is even referred to as text replacement, as it replaces words as you type.

This feature is commonly found in smartphones and tablets. Its basic function is to correct typing or spelling errors, saving the user time.

It is software that makes changes or suggestions automatically to whatever one types in and corrects it immediately if one has made any grammatical or spelling error. Due to the advancement in technology, autocorrect can identify more grammatical mistakes effectively and efficiently.

Autocorrect was released in 2007 and is becoming more advanced now and then. Apple’s autocorrect feature is Auto-Correction, which becomes active on every application that uses your iPhone’s keyboard. These applications include Notes, Messages, Emails, and various others.

So, when you think of disabling the autocorrect feature on an iPhone, it will automatically apply to all other applications that use the device’s keyboard, not only the Messages application.

Why Turn Off Autocorrect Function?

Autocorrect is a helpful feature for all on any device. As you know, no one likes to send messages with numerous typos as it appears unprofessional and unclean. Auto-correction is a blessing for people like these.

However, the autocorrect feature in iPhones has been charged with causing problems rather than being helpful. Auto-correction of iPhones matches your contacts, the dictionary, and the words you often use.

It fixes typos in your sentence but changes the meaning of the text altogether, which does not make any sense in most cases.

Sometimes, words that were autocorrected turned out to be so funny. The growing use of the feature of autocorrect on phones has led to the creation of a website called Damn You Auto Correct, where users share and post embarrassing or humorous cases of shocking auto-corrections.

To get rid of situations like these, you need to know “how to turn off autocorrect on iPhone.”

How to Turn Off Autocorrect on iPhone?

How to turn off autocorrect on your iPhone? The process of turning off Auto-Correction is not much difficult.

You can perform this easy task in some simple steps using Settings on your iPhone.

Steps to Turn Off Autocorrect on iPhone:

To turn off the feature of autocorrect on iPhones, you need to follow some simple instructions as listed below:

Initially, you need to visit the settings of your device.

After that, you have to click on the option “General” from the settings.

From there, look for the option “Keyboard” and tap on it.

In the “Keyboard” section, you will find the option of “Auto-Correction.”

Step 5: Switch It Off

Next, you have to slide off the option “Auto-Correction.” It will turn off the feature of autocorrect on your device.

Now, you have successfully turned off autocorrect on your device. By doing so, you no longer have to worry about being autocorrected when using the keyboard of your iPhone.

On the other hand, you can turn on the feature of autocorrect anytime. For this, you have to visit ‘Settings’ and then ‘General’ and, after that, ‘Keyboard.’

So, “how to turn off autocorrect on iPhone” is quite easy.

How to Extract Data via Tenorshare UltData

Now, you have successfully disabled the autocorrect feature on your iOS device using the process for “how to turn off autocorrect on iPhone.”

However, what if you unknowingly delete some important messages on your device?

It happens to almost everyone all the time. To cope with situations like this, you need to create a backup of all your data.

If you have not created a backup but lost some really important messages, you need a data recovery application to recover your data.

iTenorshare UltData is one of the best applications that you can use to recover your data without worrying much.

It comes with various advanced features, some of which are listed below:

After installing and launching UltData, click on the “Recover Data from iOS Devices” button.

Switch on your iPhone and then connect it to your PC. UltData will detect it automatically once it is connected & trusted.

Once your iPhone is connected, you should tick the data you want to scan and recover, then click on the “Scan” button to proceed.

Step 4: You Can Preview Lost Data Before Recovery

You can click “Show All” or “Show only Deleted” to recover the needed data.

Just click “Recover.” You can also recover lost files on the PC (only contacts & messages can be recovered to your phone directly ).

To recover your deleted or lost files in various scenarios like a broken screen, accidental deletion, iOS upgrade, bricked phone, forgot password, factory reset, and other situations, you can use Tenorshare UltData.

You can even try its free version to know whether your files are recoverable.

Now, you know what all you have to do for “how to turn off autocorrect on iPhone.”

By turning off this feature, your device will not change any word you type using its keyboard.

It is not a difficult task as such to turn off autocorrect on iPhones.

How to Resolve Bad ESN Effortlessly

What to Do If Safari Disappeared from iPhone

How to Transfer WhatsApp Business from iPhone to Android?

How to Unlock SIM Card (Comprehensive Guide in 2022)