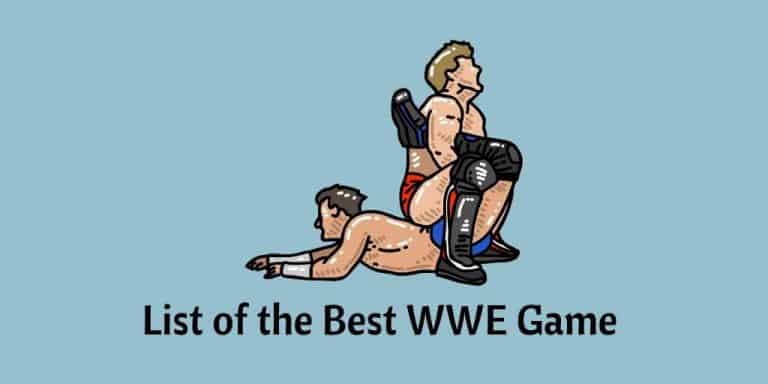 There is no doubt that there are many best WWE game titles today. In the past few years, the WWE (World Wrestling Entertainment) has had met phenomenal success on TV.

All three parts of WWE – namely, RAW, SmackDown, and NXT, have millions of viewers from all around the world.

In fact, every WrestleMania event attracts billions of viewers and is considered one of the largest spectacles in sports entertainment.

If you are a diehard WWE fan but not quite ready to enter the ring, there are many different best WWE game titles that you can try out.

These games will allow you to step into the boots of your favorite superstar, whether it is Stone Cold Steve Austin, The Rock, or Hulk Hogan.

What Is The Best WWE Game To Buy?

The graphics were quite awesome, and the wide range of wrestlers on the roster made the game very interesting and thrilling.

The Story Mode of the game consisted of more than 40 greatest matches held at WrestleMania. The attention to detail is incredible as well.

Overall, the gameplay was unique and fresh, filled with new techniques. This made WWE 2K14 one of the best WWE games in the market.

PS: here are the best Camera games for your reference.

WWE 2K15 has not made it to this list because the game was a disaster. As a result, WWE 2K16 had to be something out of the blues to blow the minds of gamers.

Thanks to the wide range of gameplay systems, WWE 2K16 became one of the best WWE game titles.

This was considered one of the best WWE game titles and included the return of legendary wrestlers like Goldberg. Additionally, the graphics were better, and the roster was large.

This game had almost the same gameplay as WWE 2K16 but offered a better gaming experience.

Sadly, the game removed the Showcase mode; on the good side, the MyCareer mode was expanded. Additionally, the Legends showcase was added as a DLC much later.

WWE 2K18 is considered one of the best wrestling games today.

The game’s graphics are amazing, and it has been released for Nintendo Switch, PC, Xbox One, and PlayStation 4.

WWE 2K18 can now feature eight wrestlers in the ring at once, which makes it closely similar to the Royal Rumble matches we see on TV.

There is also the Backstage Brawl mode, where you can fight other wrestlers backstage. You also have wide use of weapons and the environment you can use to gain an advantage.

WWE 2K19 has been touted as one of the best wrestling games today; it is also said that it will be the last game developed by Yukes before Visual Concepts took it over to design WWE 2K20.

This game became one of the most popular and played WWE games in history.

WWE 2K19 has featured a mix of action-packed grappling and simulation.

While the overall gameplay remains more or less the same, the game’s design and visuals have been made to keep hardcore WWE gamers happy.

WWE SmackDown vs. Raw 2010 was one of the first games that introduced the Road to Wrestlemania mode, which quickly became a fan favorite.

This mode made this into one of the best WWE game titles. Apart from this, WWE SmackDown vs. Raw 2010 also introduced the Story Designer mode for the first time.

With the help of the Story Designer mode, you can choose to create your own WWE journey. You could use your creativity in whatever you feel would be the best.

If you are unable to think of anything, you can also download the ideas of others and tailor them as you see fit.

One of the best wrestling games when released, WWE Smackdown vs. Raw 2011, was a vast improvement from its predecessors.

The game has more realistic aspects of physics, which bought in a whole new side of extreme matches like Tables and Ladder matches.

Additionally, WWE Smackdown vs. Raw 2011 also included the debut appearance of the Universe Mode, which would be included in almost every WWE game title in the future instead of the General Manager mode in the previous installments.

WWE ’12 was the successor of WWE Smackdown vs. Raw 2011. Apart from the new name, game developers Yukes also tried to add new types of gameplay mechanics.

Instead of the grapple system, the wrestlers performed different types of moves depending on their physical condition; the grappling system was reintroduced in the later titles.

While this new system was a good theory, this took away the control aspect from the players who had devised plans of performing the moves in different stages of the match.

One of the best WWE game titles is WWE ’13. This is a great video game that has been created in a way that will appeal to gamers.

While making a character has always been a part of the WWE Universe games, WWE ’13 did better than most.

You will see the graphics are easily one of the best. The roster includes current players as well as WWE Legends.

This way, WWE ’13 opens up the possibility of pitching a legend with a current player to fulfill the dream match scenario.

WWF SmackDown! Just Bring It is considered one of the best WWE game titles. This game consists of an enormous roster filled with the best superstars.

Additionally, you will also find more than 60 different types of matches you can play.

Overall, WWF SmackDown! Just Bring It offers a lot of variety to play.

It is still one of the most popular WWE games today, simply thanks to the huge number of superstars on the roster.

Day Of Reckoning 2 is one of the best WWE game titles, which is a successor to the previous game with the same title; both games were instant hits.

Day Of Reckoning 2 bought in many different characters and added great storylines instead of just blatantly copying the original game.

The story of Day Of Reckoning 2 is a continuation of the first part and will be understood by players that have played the previous installment.

The newer version added a lot of new moves like submissions. Additionally, the developers have also focused more on the actual wrestling gameplay.

Released in 2011, WWE All Stars is one of the best WWE game titles to be released.

Unlike the rest of the WWE games, this particular title was more of a comedic arcade wrestling game that was designed to be appealing to all types of gamers.

One of the most exciting modes in this game was the Path of Champions, a 10-man gauntlet match.

Additionally, there was also the Fantasy Warfare mode, where you could pitch WWE Legends against their modern-time counterparts.

It was released in 2003 and became one of the most popular WWE games on the market.

Here, your job was to destroy the vast WWE empire built by Vince McMahon so that you could rightfully take place on the WWE roster.

Instead of the usual story mode, WWE WrestleMania XIX consists of gameplay where you have to complete missions and earn achievements.

Some aspects of the game take place outside the arena and the ring. Of course, there are also classic WWE matches for additional content.

The game has very simple gameplay, which explains why it has been around for many years.

While the game may have retro graphics, it is easily one of the deepest and best wrestling games that have been developed.

The animations are responsive and smooth; the moves also feel impactful and look like they hurt badly. In fact, AI for computer-controlled gaming was way ahead in the future.

The titles mentioned above are some of the best wrestling games you will see today. All these games can be played on almost any device.

As gamers, most of us have been influenced by WWE in some way or another; therefore, playing these games feels more like nostalgia.

It has been said that WWE 2K21 will be something the world has seen before! We can do nothing more than wait to find out about it! If you cannot wait, you can try the best WWE game titles.