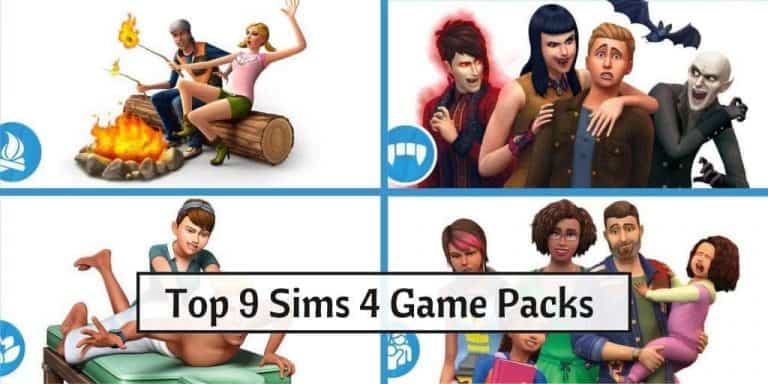 With no news of the release of Sims 5, you should have a look at other best Sims games to make the wait easier. There’s a lot of content that you probably would’ve never tried. Don’t worry; we’re not asking to find out the best in the huge pile of DLCs. We’ve presented some of the best Sims 4 game packs ranked in the list below.

About the Sims Game

Sims is one of the largest life simulation series that has been in the gaming world for over 20 years. It has launched a lot of DLC packs to give out additional functions with a total of 4 complete game franchises.

It includes a lot of mind-blowing and tangling moments that will always keep you shocked. There are many versions of Sims that will satisfy your hunger for not only adventure games but open-world ones as well.

To make things easier, we’ve also given you a brief description of the best Sims game.

Also, if you are looking for the best Laptops For Sims 4, here are the guides you should check out.

This version of the Sims franchise has scored the last rank in between all the versions of this game launched. It was originally published in 2000 and had achieved a huge fan following. This game boasts of selling 6.3 million copies of the game in mere two years of the launch.

It includes all the basic features that were quite astonishing for that time. This includes progressing in your career, managing your needs, starting a family, and building the home of your dreams. All these features made it one of the best Sims games of its generation.

This game is the sequel to one of the most amazing yet intriguing games that were originally released in 2004. It has become one of the best-selling games. This game is still considered the best sim game for various reasons. One of the reasons is the tremendous 3D graphical experience this game provides. The advanced customization option has also helped it become one of the best games in the Sims world. There was also a social update that allows your Sims to collect memories as well.

This part of the Sim franchise is quite amazing and includes all the improved parts from the previous version of the Sims series. It is also the first game of the Sims series, which allowed the players to experience the open-world gameplay. The capabilities of the buildings were increased, and you could get your hands on almost everything. Not only this, but it also allowed players to give additional details to their Sims. This included a change of voice, footwear, tattoos, shape of the face, and even body.

This version was a little step back than advancing more into the future. It also gave a simple interface in comparison to the in-depth interface of the Sims 3, making it the best Sims game. This game also removed the open-world experience, building features, vehicles, and Create A Style mode.

However, it gave a new concept to the Sims by adding emotions into the game. This game may have disappointed fans as it lost some of the fantastic features. However, it made it up by offering various interesting DLC packs, which added intriguing functions to the game.

Below is the list for some of the best Sims 4 game packs ranked according to their gameplay.

This game is quite one of the most intriguing versions of the Sims 4 franchise. However, it could have been more amazing, but things didn’t go as planned due to lack of execution. Batuu is one of the largest places which keep out the immersive feel of Star Wars. Even if it still has that massive outlook to it, its limited options to do things kept it down.

There are various side quests, characters, and distinct factions to prove yourself. Apart from all this, there aren’t places you can explore except HQ, Olga’s Cantina, and Underground Resistance base. The rest of the things on the map are like a showpiece.

This game of this franchise is quite terrifying, which makes it the best Sims game. It also gives out a cautious and horror gameplay experience along with a mind-blowing storyline. This version also gives out unique gameplay, which dares to either make it a miss or a hit. Its amazing storyline is quite driving and terrifying at the same time.

Apart from all this, it offers fun to play and an interesting gameplay experience. Due to the high price, many gamers didn’t think of as much of an interest as value money. Even though you do gain some tremendous build and you can even buy items in the newer desert world it has to offer.

This game of this franchise is inclined towards the relaxed style gameplay, which gives it a perfect spot in the list of best Sims games. Buying this pack will add up a little spa in the town which can be visited at your leisure. Not only this, you can do much more than relax in the spa. It will also allow you to work on the wellness of your sim and get away from a tiring day.

The spa also allows you to take yoga classes, learn to meditate, go to a sauna, or even grab a massage. It has everything your sim needs to have a happier life. Apart from all this, these spa places have fantastic bathrooms with pretty tiles.

This version of this franchise is filled with adventure and suited for gamers who’ve always felt the itch to play adventurous games. The story revolves around your adventure into the jungle of Selvadorada, which is quite intense and filled with ferocious elements. There are various dangerous things that one would not love to mess around with.

Don’t forget to carry all the necessary supplies into the jungle. Your goal is to reach the temple of the jungle, which is situated in the depth of the forest. However, getting friendly with the local tribal people will be a huge help. You need to keep upgrading your culture stats for a better and easier stay in the forest.

Too much work surely does lead to burnout; how about taking a vacation to soothe all the stress in your body? This game offers similar gameplay. Choose between the five lots which are situated in the Granite Falls National Park, and let your sim get the vacation it deserves. That place also has a huge explorable forest which is filled with activities. Not only that, the background environment is quite beautiful near the forest.

However, if you are also searching for some adventure within the forest, you can try locating the secret area. This game is quite one of the best Sims 4 game packs ranked accordingly in this list.

This game of the franchise is quite popular among gamers who love a hotspot life in the game. You can buy restaurants or have a place to hang out at night. This does everything you need to have a cozy life inside the game. However, it is more inclined towards running a huge restaurant. Apart from that, you can go to various restaurants, have date nights, and even enjoy your loud family celebrations. These restaurants are built to cater to every sort of event on their premises.

Just in case if you also wish to run your restaurant inside the game, it’s a huge chance that you will fall in love with this game. This also includes building your restaurant from nothing. You will manage everything from your staff to even getting reviewed by some of the largest critics. This pack fits beautifully in the list of the best Sims 4 game packs ranked accordingly.

This version adds a little different touch to the life simulation genre of this game. It brings out various spellcasters into the franchise making it one of the best Sims games. These spell casters are not only powerful, but they inherit a similar power as the skill tree of the vampire does. Your mission is to complete all the in-game quests. It’s your choice whether you’ll specialize in which type of magic or spell or will it be all of them.

When learning is not enough, you can also explore various areas in the game and fight with other spell casters. Apart from all these mind-blowing features, you can fly on a broom, have your magical wand and live the life you desire.

This pack of the Sim 4 franchise added a newer feel to the game by adding a familiar side to it. Parenthood in the series gives out a whole new experience of raising your child with utter care like a real one. Every decision you make in the game will affect the growth of your child. This includes the type of conversations you’re having, all the disciplinary tricks, and other similar things. To become the best of the best, you need to keep on upgrading your parenting skills, or your child may end up becoming something that terrifies you.

This pack includes various customizable settings, which include rivalries in-between siblings, curfews, and various other little settings. This game has churned up the place with its interesting gameplay. It is also one of the greatest Sims 4 game packs ranked as one of the best on the list.

You can also play like a vampire and Interact with the world of the Sims 4 in a new challenging way. To survive as a vampire and upgrade your skills, make sure you’re always feeding upon the passion fruit or Sims.

PS: here are the best Nancy Drew games ranked for your reference.

For any gamer who’s a huge fan of life simulation games, this is like heaven to them. It includes a lot of mind-blowing and tangling moments that will always keep you shocked. We’ve mentioned Sims 4 game packs ranked according to their gameplay experience. Don’t forget to tell us about your favorite in the comment section.

What Is The Best Pokeball You Can Find Today

Playing A Gloud Game On PC: Tips And Tricks