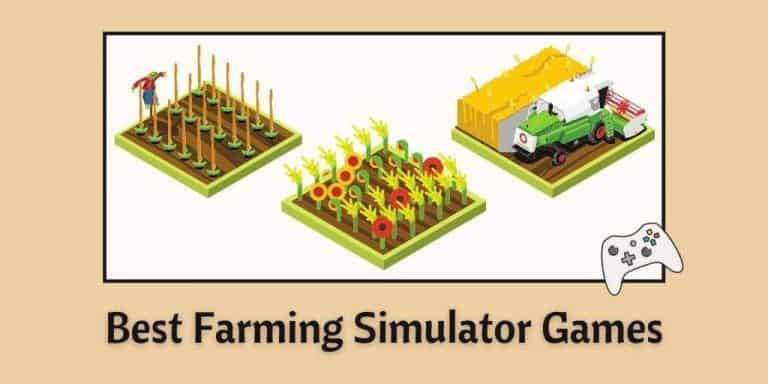 Farming games are one of the most addictive games. However, choosing one from the list of best farming games isn’t easy.

There are hundreds of choices that may be confusing till the end.

Don’t worry! We have a list of the 15 best farming simulator games that you must check out!

Nowadays, there are videos of almost every single type of genre, from turn-based games to adventure games or even farming games. Life simulation games like Minecraft and Harvest Moon are some of the best farming games you’ll come across in this farming-sim genre.

It includes everything from managing your crop, protecting it, raising your animals, and just running your farm. All these features make the gameplay quite interesting. Apart from all this, these games are available on almost every single platform you could name, making them some of the most versatile games as well.

Below is a list of some of the best farming simulator games that will give you exactly what you’re looking for.

This game has a lot more to offer than what its name says it’ll. The main protagonist returns to his family on the village farm after living a fortune in the city for various years. Although, The storyline is not that deep and seems a little more constructive than farming. It is mainly a farming-RPG/sim mixed type of game that gives out one of the best farming simulator experiences.

This game allows the players to not only build farms and take care of crops, but they can do various other tasks as well. This includes taking up side quests and focusing on building a relationship with people and taking up Important life decisions.

Besides, here is the guide on ESO gold farming skills for your reference.

This game gives out a common storyline that most of the farming games revolve around. However, it does carry a special feature that has made this game part of some of the best farming games. Every single character in the town is an adorable animal, and it’s fun to play around with them.

However, the special features aren’t just limited to adorable animals. You can also choose to play in multiplayer mode along with your friends. It also allows the players to set up their shop in the town. Apart from these features, you’re tasked to build and maintain your house and take care of the town as well.

Also, let’s figure out how to unlock Sewer in Stardew Valley with ease.

This franchise has given out some of the most amazing and fun-to-play games that are fully based on the farming theme. These games are usually released every year after the launch of Farming Simulator 2008. It also gives out a quite realistic approach to various aspects, making it part of one of the best farming simulator games.

These games of this franchise give out quite a unique yet proper approach to farming-sim gameplay. It is available exclusively on PS4, Xbox One, and PC only. However, Farming Simulator 20 is a special takeaway for players who prefer iOS, Nintendo Switch, or Android.

This game is more of an open-world game packed with some of the most amazing adventures. However, it has some mind-boggling farming elements to it as well, which makes it part of some of the best farming simulator games. It allows the players to take up various crafting specialists, build their farms across different fields on biomes.

Apart from all these farming elements, this game has a ton to offer which you can experience at your own pace. You can explore the huge world, make friends, track down different kinds of sprites, and complete side quests.

This game is quite different from any games we’ve seen so far. It allows the players to choose between both solo and multiplayer type gameplay. The in-game mechanics that these offers are quite relaxed in comparison to other farming simulator games. It has a special touch to it that allows it to follow a real-time system, and the game keeps on working even though you’re not active.

You can not only grow crops and work on the farm but also expand it, raising the animals and much more similar ones. This game is exclusively available on Mac, PS4, Nintendo Switch, PC, and Xbox One only.

The good thing is that the core farming simulator experience hasn’t been altered much. As not many changes were made to this game, quite a lot of fans were disappointed yet majorly supported it as well. This version has a lot to take away from, which includes making friends, running your farm and exploring new places, and much more.

7. Sakuna: Of Rice And Ruin

This is one of the unique games to be listed in this list of some of the best farming games. It may look like a side-scroller game that includes fighting. In reality, this game is divided into two distinct genres; farming-sims and hack n slash gameplay.

There’s one more interesting part of this game; you can grow different types of rice in the game. Everything is decided by the way you water your rice, mix fertilizer, and some other aspects. Each kind of rice has a different kind of impact on the way Sakuna will fight the enemies.

This game is mainly a PC game and gives out a similar outlook as Minecraft does. This game may look quite a lot similar to Minecraft, especially with its box-style gameplay. However, this is also one of the reasons for it to become a worthy nominee for best farming games.

Your mission is to not only build your farm and maintain it. It also includes cultivating crops, raising animals, fishing, and much more than you may get to experience in other games. In addition, you can help out various villagers in completing questions and be their friend along with it.

The game is one of the newest releases in the Story of Seasons franchise. It offers similar gameplay just like its pre sequels which allows him to maintain the farm he got from his grandfather. However, his duty includes growing crops, fixing up the old farm, expanding it, raising the animals, and many more similar ones.

You can also build relationships with various characters inside the game and settle down. Not only that, but you can also get the Expansion Pass which offers some special features. This includes timely updates, the addition of characters from the Harvest Moon franchise, and much more, which makes it one of the best farming simulator games.

This best farming simulator game is one of the most colorful, expansive, and relaxing RPG games developed by Sean Young. However, the start of the game is still something that none of the gamers would’ve guessed about. A strong RPG hero takes out a villain and takes care of the day.

The story revolves around rebuilding the whole town of Solemn. There’s so much opportunity in this game that you can’t help but end up playing hours on your console. It also allows you to meet new characters, farm, craft various things, and have a great relaxed time in building the city.

This game was originally released on pc in 2011 but also has been transferred to various other formats as well. It offers a building experience in a huge open-world experience. The best thing about this game is that it allows the players to do almost everything like Minecraft. Everything you do in a game, like growing crops, exploring the world, is on your creativity. This game is exclusively available on PS3, PS4, 3DS, Nintendo Switch, Android, iOS, PC Xbox One, Mac, Wii U, PS Vita, and Xbox 360 only. All these features and portability is what make this game one of the best farming games.

This game provides quite an interesting and minds intriguing gameplay. The main protagonist has moved to a faraway planet to start a new life on the ranch. Its main task is to look out for various breeds of special creatures, namely Slimes.

However, you’ve to do it while growing your crops, expanding your ranch, and selling Slime poop for extra money. Various hidden mysteries are waiting to be discovered on your journey. Apart from this, this game offers a special touchup to the game, a special Tarr Slime, which is something you need to look out for.

You must have heard about this one of the biggest games in the history of the gaming world. All thanks to its unlimited size and the sheer amount of fun you get in this open-world sandbox game. However, it’s not just building and crafting, outbuilding and exploring. Farming is one of the biggest parts of this game. You can grow various crops and handle them while you’re away exploring various domains. Apart from all these spectacular features, its huge fan following is also the reason for it to become one of the best farming games out there.

This game was technically released in the early days of 2019 and has accumulated a lot of fan following. The story revolves around the protagonist inhibiting his Pa’s old farm. You’re tasked to restore it to its working condition by doing various tasks.

This includes raising animals, helping out various people inside the town, and even growing all the crops. It also allows you to explore the mines for resources, take part in festivals, play out minigames, and even have romantic relationships with people.

This game offers an indie theme with quite a similar gameplay experience as some of the best farming simulator games. However, it doesn’t mainly focus on farming and taking care of your crops. It also allows the player to explore the town and become friends with the people in the town.

The story revolves around the player taking over their late grandfather’s farmhouse. You’re tasked to restore the old farm by raising animals and growing crops. However, you’ll also be given various side quests to help out the people of the town and similar objectives, making it one of the best farming games.

From amazing games like Stardew Valley to Farming simulators, we’ve covered some of the best farming games for you. These farming games give out relaxed gameplay to your eyes who are tired of playing action-packed gameplay.

Don’t forget to tell us about your favorite farming-sim game in the comments section below.

Top Best Green Cards in MTG Picked Just for You