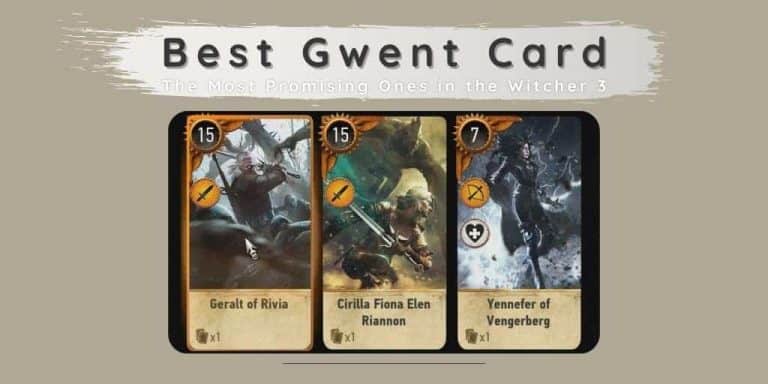 If you are looking for the best Gwent cards, this is the article you should read. We have created this article with several entries that can impress you.

So, you can find several best Gwent cards without wondering anymore.

Why Do You Need the Best Gwent Cards?

Do you want to play Gwent with confidence and high potential to win? If that’s the case, you should find the best Gwent cards and become a master of the gameplay. As long as you have those Gwent cards, your chances of succeeding in this game are immense.

You already know how useful fire is in real life. The same element, however, becomes a devastating weapon if you handle it in the wrong way. Well, if you apply the same to the Gwent, having this Scorch card is incredibly helpful. It can make any deck powerful.

With Scorch, you can destroy even the highest attack card on the entire field. Well, adding more value to this card will destroy all the cards whenever there’s a tie. For instance, assume that your opponent has stacked the field with various strong cards to perform an attack. In that case, you can rely on Scorch to destroy them all at once! But you must know that it can even destroy your own cards as well.

As you may already know, Skellige is considered to be a fantastic part of the game “The Witcher 3”. However, it sadly doesn’t have its own Gwent deck. Anyone would agree that it should have such a deck. Many individuals thought the same before the release of the Blood & Wine expansion. And, since then, the deck called Skellige is added. With that, players were able to get various powerful cards, and Ermion is one of the best Gwent cards. This card comes with an eight-attack feature, and it has the Hero ability too. However, it is associated with Mardroeme’s ability. It can ignite all the Berseker abilities.

In some cases, some Gwent players maintain perfectly assembled rows. Moreover, they want to make those rows even stronger. If you come across such a requirement, you can use Commander’s Horn to do that. In simplest terms, Commander’s Horn can multiply the strength of the entire raw in two. If you intend to win against the hardest opponents, this could be one of the best Gwent cards.

In some cases, you might play a superbly powerful card in the previous round. Then, you can turn the game into your side when you access the game for the second time. However, the cards that come with Medic ability will allow you to retrieve power. That means you can retrieve discarded pile and use it to play very soon. Needless to mention that this is a great way to boost your playing ability.

In many cases, those Medic cards come with a very little amount of attack. Also, when they start to attack, your opponents can use a nasty attack (like Scorch) to knock it down. This is exactly why we consider Menno Coehoorn to be one of the greatest choices. The card works as a medic, and it is a Hero too.

It is true that there is a hot debate about Yennefer and Triss among “The Witcher 3” enthusiasts. However, the truth is that the Gwent card of Yennefer is much better than Triss’s one.

In fact, Triss doesn’t have any ability, and he is a 7-strength hero in the game. Yennefer has the same strength too, but it comes with medic ability. She also has immunity to special cards. All in all, Yennefer is one of the best Gwent cards.

In general, it would be great to have a card that lets you draw more cards. Thaler is one of those cards that become handy in such situations.

In addition to the card called Mysterious Elf, you can call Thaler to be the weakest spy. That is because it is a 1-strength card. After all, giving your opponent only a single strength unit even after drawing two cards is tricky.

Those who have used Villentretenmerth already know some special events in Gwent. In fact, Villentretenmerth is one of the best Gwent cards that can Scorch opponents. Also, it can get rid of the strongest close combat cards of the opponents. However, that happens when there is a row with a value of more than 10.

If the opponent has played multiple cards with the same value, you stand a really good chance. You can knock plenty of cards out at one shot. You can use Villentretenmerth against someone who plays Monster’s deck. Then, you can get rid of over ten cards in a single shot, and it is very handy.

Depending on your ability, you can either break or make the game. Also, the chance at victory can easily come down to the ability you choose. For instance, if you choose Morale Boost, you can get a plus-one attack on every card in the row. Choosing this card is a wise option because it offers superb attack power for you.

Isengrim Faoiltiarna is a card that allows you to achieve both of the above aspects. It works as a Hero Card, and it offers ten attacks as well. More importantly, you don’t have to fear its removal. On top of that, it offers a very handy Morale Boost to the close combat row.

Besides, if you are searching for the best Spyro game or the best MTG core set, here you are.

If you are a novice Gwent player, Kambi will appear to be a pretty terrible card to you. It has zero attack power and offers no extra bonus. What is the point of having such a card? Well, the truth is that it is not just a waste of play at all. Instead, it comes with a hidden benefit.

If you remove this card from the field, you will see that it gathers Hemdall. Hemdall is a powerful entity with 11-attack power. Also, it is a Hero card. With that card, you can reach the next round with more confidence.

When you play a card game, you will come across a term called “beatstick.” Well, those are the cards that cannot deliver any special effect alone. However, they become very useful and powerful when it comes to stats. Ciri and Geralt are the best examples of those cards.

These two cards are immune to any weather and other ability cards. In addition to that, they come as 15-strength cards. They don’t help to create combo plays, though.

Yes. Hero cards are absolutely great. They always get affected by the abilities of others. As a result, you can add a large range of attacks to the field. You don’t have to fear because your opponent will not be able to rip it away.

However, most of your hero cards tend to reach their maximum limit after ten attack power. With some cards, the attack power is even lower. However, Ciri offers a huge attack power (15-attack power). This power is more than enough to win some rounds easily. That is exactly why we consider it as one of the best cards you can ever access.

Well, Gwent is a game that requires a great deal of resource management from the player. You will need to utilize every possible option to play the best Gwent cards you have. If you play cards to ruin the field of the opposition player, you can retrieve the fallen comrades. We are talking about spies.

These cards can be considered as unstoppable power in terms of Gwent domination if you use them correctly. You should use the Decoy cards so you can pick any non-hero card repeatedly. In other words, a Decoy allows you to use powerful resources repeatedly, even if you have only one card.

As mentioned above, Hemdall is one of the best Gwent cards you can have in the deck. It uses Kambi to be summoned, and it will be a very strategic move. However, it is not compulsory to use Kambi to bring Hemdall to the field. Instead, you can bring it straightaway to the field. You can throw this hero and speed up your journey towards victory.

Spies become essential for many playstyles. Adding two cards to the playing hand and offering small attack points to the opponent becomes a turning point. Well, the winner of a Gwent round will be decided by the number of cards you have in hand. So, using spies wisely is important.

Mysterious Elf is a great option in this case. It offers zero attack power to the opponent. However, it comes with Hero’s ability. Therefore, it is impossible to remove the said card from the board.

PS: click here for the full MTG control decks guide and get to know how to perform the best Gwent deck builds & make your possibilities of succeeding higher.

So, those are the best Gwent cards we have to present to you in this list. There can be many other Gwent cards to use, but the ones we have mentioned here are very handy.

All About Getting Rare Candy in Pokemon Go And Using It