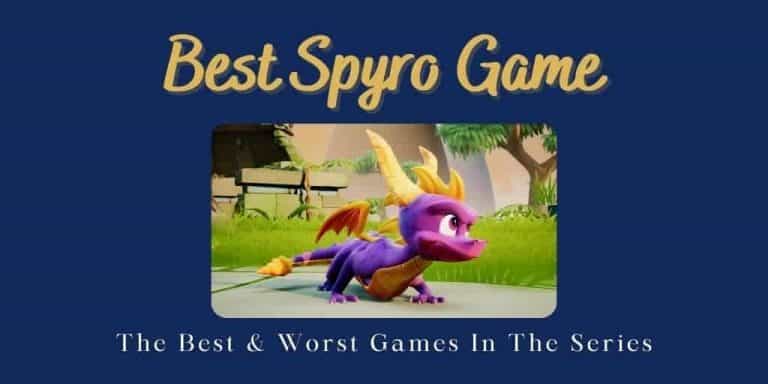 Did you end up reading this article because you want to know the best Spyro game?

Well, look no further as we have listed down a collection of the best games in the Spyro series.

To make it a more informative list, we have added the list of worst games as well.

In fact, the character called “Spyro the Dragon” is one of the most iconic symbols created for PlayStation. It was introduced back in 1998. With that said, let’s take a look at the best Spyro game you can find.

A large number of Spyro games come with some common elements. For instance, enemies of Spyro appear in all those games, and players need to collect various items to advance.

In addition to that, there are other similarities between these games. We prepared this list considering all those similarities so you can see if your best Spyro game is there.

In addition to that, we’ve included the worst games as well to give you a general idea about them.

First, let’s take a look at the best games. You can go through this loss and choose the best Spyro game.

This game has so many unique characteristics to be placed at the top of the list. In fact, it can be considered as an alternate sequel to the original trilogy of the game. As per this game, Spyro and his friends are on holiday.

Then, they discover a note from Zoe. According to the note, all of the fairies are being kidnapped by evil Grendor. So, Spyro, the hero, should help them.

Upon its release, it has received mixed reviews. However, it was sold very well. In fact, this game became the 13th highest title of its genre during 2000 – 2006. It is available for consoles like Nintendo DS, PS Portable, and Game Boy Advance.

Besides, here are the Best Samurai Games for PS4 and PC and the top SNES fighting games for your reference.

In simplest terms, this is the remaster of the first three games released under the franchise. Some gaming enthusiasts even say that this is the best Spyro game ever produced.

Those who were long-term fans say that this game was able to meet their expectations. The graphics of the game are so advanced compared to the originals. However, the enemies and the obstacles are left in the same places, so there is no confusion.

This remake is so precise when you compare it with the original. It allows individuals to recall their childhood memories.

In fact, this game has taken all the best games in the Spyro series. The tone and the feel of the original game are retained while giving a total overhaul to the graphics.

So, we have enough and more reasons to place it at the top of the list.

Also, click here for the full League of Legends vs. Dota 2 comparison.

Many experts praise the improvements that are visible in this game, comparing it with the original one. However, according to some players, the controls of this game are somewhat difficult to master.

As per the gameplay, the Spyro is returning to the Dragon Realm. Then, he realizes that all the fireflies have been stolen by an army of Rhynocs.

Some individuals will say that Skylander is not actually a Spyro-related game. This game comes with a plethora of characters that are playable.

All those characters can be unlocked through interaction using physical toys. Those physical toys can be purchased separately.

It is true that this game has pretty questionable characteristics to put as a Spyro game. However, the first Spyro game was well-received, and it had a very friendly tone which is ideal for the family.

Some may question the requirement of purchasing new characters. However, it’s still a good game for pretty much any age group, particularly for children.

Spyro The Dragon, being one of the best in this franchise, has set standards for other following games.

In fact, this game was the pioneering one that introduced the mascot that became so popular. The respective character was sent on a quest to free those imprisoned dragons – they are fellows of Spyro. Then, he has to face the villain called Gnasty Gnorc.

As per the gameplay, you are supposed to explore a variety of levels to find collectibles. Those collectibles include gems, dragon eggs, and so on.

Also, the dragons who were captured were contained in crystal statues. The game was praised highly across the globe.

Ripto’s Rage! It can be considered a direct sequel that inherits various characteristics from the authentic game (Spyro The Dragon). Spyro was summoned by Elora, Professor, and Hunter, who are the new characters to the game.

They were looking for many worlds for a dragon to defeat the Ripto. In fact, Ripto is invading and conquering all the Avalar.

With this game, you will follow very simple gameplay. It comes with Spyro that collects all the talismans and elements like power orbs.

You should play various levels to do that. Basically, this is a game that has a better story, plenty of worlds to explore.

This is considered to be the final edition of the original trilogy that was offered by Insomniac Games.

More than 2 million copies of this game were sold solely in the United States. This game doesn’t come with too much variation.

However, it has some new characters to play with, which is an interesting thing. Moreover, the voice acting is excellent, and there is no shortage of minigames to play.

The Worst Games of Spyro

Now you have had a look at the best Spyro game, let’s learn about the worst games as well. We list these games below to get you an idea about them.

In many cases, we believe that two ingredients add up to make a better outcome. However, Spyro Orange: The Cortex Conspiracy has proved it otherwise.

Well, this game is developed with the blend of Crash Bandicoot Purpose: Ripto’s Rampage and Pokemon games.

Things have gone pretty weird in the development, and that makes this game a really bad one.

02. Spyro: Attack of the Rhynocs

However, they have attempted to add some roleplaying elements to this game. Particularly because of that, the game has become a very unmatching one for a Spyro title.

This is the first game in the respective series. This game was introduced with compatibility to all the major consoles. As per this game, there is a Spyro, and only a few of his allies are present.

All those allies are playable. They face against a new foe called Red. This game received plenty of criticism because it lacks the innovation factor.

04. The Legend of Spyro: A New Beginning

This is another title released for multiple platforms. Also, it is published by Vivendi Universal Games as a franchise reboot. This game is made as a reimagination of the world of Spyro.

As per the gameplay, you will see a dragon who attempts to clutch some eggs. The purple egg in that lot is the important one.

05. The Legend of Spyro: Dawn of the Dragon

If you know about the Legend of Spyro reboot series, this is the third entry of it. It is also the final entry. It brings a complete overhaul to the game.

However, the gameplay has a very short duration which is terrible for many users. The players are likely to get bored easily.

Well, Shadow Legacy is known as a roleplaying game that was available for Nintendo DS only.

The plot of the game is to follow the Spyro. You should do it after some characters are absorbed by Shadow Realm (which is a dimension).

This game abandon’s the root of the platform. The game was mainly criticized due to the boring gameplay.

According to many critics, this game is rated as the worst of the entire Spyro franchise. Basically, it is a massive disappointment for those who love the franchise of Spyro.

This game was initially released for GameCube and PS2. Although they had plans to release it for Xbox and Windows, it didn’t happen due to the negative feedback.

It is short, has plenty of glitches, dropped framerates, poor controls, and so forth.

PS: if you are looking for the best Dragon Ball Z game, click to read more.

So, that’s our list of best and bad Spyro games. What’s your best Spyro game?

How To Make A Text-Based Adventure Game

Playing A Gloud Game On PC: Tips And Tricks

Where to Find Crystals & How to Find Gemstones?