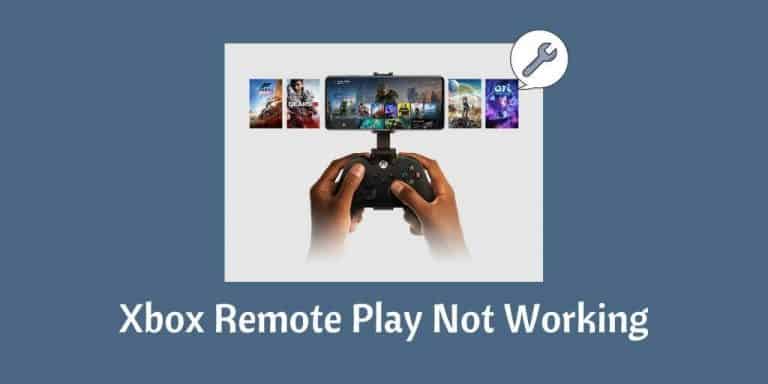 If your controller doesn’t work when connected via remote play, this guide is for you. This article will help you fix your Xbox Remote Play not working imminently.

All you have to do is follow the troubleshooting tips mentioned in this guide so it can be set right away!

The Xbox remote play is a feature that allows you to use your Xbox One console to play certain games on your Windows PC.

The idea behind the feature is that you can play games on a larger screen with better resolution and graphics quality. Better in a sense than what’s available on the device itself.

Here, let’s go through some of the most common and evident ways you can fix Xbox Remote Play not working.

8 Ways to Fix Xbox Remote Play Not Working
Method 1: Restart Your Console
Method 2: Use a USB Cable
Method 3: Check the Batteries
Method 4: Change the Connection Type
Method 5: Disconnect from Other Controllers
Method 6: Update the Xbox Firmware
Method 7: Check if Your Xbox controller is out of Range
Method 8: Remove Any Objects Between the Controller and the Console
Why Does My Remote Play Not Work?
How Do I Stop My Xbox remote Play from Lagging and Make It Work Better?

The first troubleshooting method that you can try to restore Xbox Remote Play is not working is restarting your console.

To do that, you will have to turn off the console. And then, unplug the power cord from the AC outlet. You will then have to wait 30 seconds before plugging it back in. You will have to do this to ensure that all voltage has been drained from your system.

Next up, plug the power cable into an AC outlet. And then, turn on your Xbox One console while paying close attention to what happens next on your TV screen.

Besides, if you wonder, “Why is my Xbox so slow?” and often stress over the downloading speed of your Xbox, let’s see how to increase your Xbox Download speed.

Method 2: Use a USB Cable

The second tip for fixing Xbox Remote Play not working is to use a USB cable. You must connect the controller directly to the console using a USB cable.

Connecting your Xbox One Controller to your console using a USB cable with a micro-USB connector is highly suggested, as it will eliminate any interference from other devices. And it will let you use all of its features in addition to remote play.

The next thing you should try when your Xbox Remote Play is not working is to make sure that the batteries in your controller are freshly charged.

It sounds simple, but it’s easy to forget that your controller won’t work without new batteries. Then please replace them with fresh ones, and you should be good to go!

If replacing the batteries doesn’t fix the problem, try switching out the controllers. Sometimes there can be something wrong with a particular device. And if there’s any other way for you to check this option out before moving on to any other fixes? Then do it! You never know until you try!

Also, if your Roku remote is not working, needless to say, how frustrating it can be. So, learning how to fix it ASAP is vital for any Roku user. Let’s Fix it Now.

If your Xbox One is connected to the internet through a router, you may need to change the connection type to get it working.

To do this, go to Settings > Network > Advanced Settings > IP settings and make sure that IPv4 is set as Automatic.

If you’re using a wired connection, try switching from an Ethernet cable to a wireless. If that doesn’t work, change from the 2.4 GHz band to the 5 GHz band (if you’re using Wireless-AC). Then restart your console and check again if it still isn’t working correctly.

Method 5: Disconnect from Other Controllers

Disrupt your console from other controllers to troubleshoot remote play issues or Xbox Remote Play not working.

And then, turn off any wireless networks that are connected to your Xbox One and PlayStation 4 consoles.

Next, check for additional devices using USB ports or power outlets on your console. And if you find any, unplug those as well!

You’ll first need to check if you are running the latest version to update the Xbox firmware.

To do this: Press the Xbox button on your controller, or say, “Hey Cortana, launch Xbox guide” (if enabled. Or “Xbox, start a party with my friends here” if the Xbox One S remote play is not working.

Then select Settings from the menu that appears on your screen. You will need to Choose System > Console info & updates > Update console > Check for updates now.

Method 7: Check if Your Xbox controller is out of Range

The following effective troubleshooting tip for Xbox Remote Play not working is to check if the Xbox controller is within range or not. If your controller is out of range, it will not respond to any inputs on the screen.

To check this, ensure the battery is charged and inserted into the controller properly. Also, ensure the Xbox console is connected to Wi-fi or Ethernet. If one of these requirements is not met, you will not be able to access remote play from your phone or tablet.

Method 8: Remove Any Objects Between the Controller and the Console

If your Xbox Remote Play is still not working, the next step is removing any objects between the controller and the console. You will have to make sure there are no physical objects between your Xbox One console and the remote play app on your device.

If an object exists between your console and the remote play app, try moving it out of the way. If there aren’t any physical objects blocking your Xbox One, check for any other potential sources of interference.

There may be a cord from another electronic device crossing into range and causing interference with your controller.

Remove all cords from nearby outlets or power strips if they’re within range. And check again to see if this resolves the issue.

Why Does My Remote Play Not Work?

Why is your Xbox Remote Play not working? Here are some reasons: first and foremost, you should know that Xbox remote play is not supported on all games and devices.

It would help if you also had a stable internet connection to use Xbox remote play. Or else your console will keep disconnecting.

It will also be helpful for you to know that your controller must be connected to the console for it to work.

Finally, you must be able to connect your controller to a screen to use Xbox remote play. And you must have access to a power source. You will have to do this if you use a laptop or PC instead of an Xbox One console.

How Do I Stop My Xbox remote Play from Lagging and Make It Work Better?

The following steps will help you to troubleshoot your Xbox remote play connection:

Xbox Remote Play is an excellent feature for Xbox users who want to play their games on the go, but it’s not perfect. Sometimes the app won’t connect properly.

Or the controller won’t sync with your phone or tablet. And also, you might encounter the problem of Xbox Remote Play not working. All these problems make it impossible to use.

There are a few things you can try before giving up on your dream of playing Gears of War 4. Check your connection and restart the devices.

And check that both devices are running the latest version of their operating systems and apps. Remember that resetting your router may fix some problems as well!

Instagram Reels Not Working – Top Fixes You Can Rely On