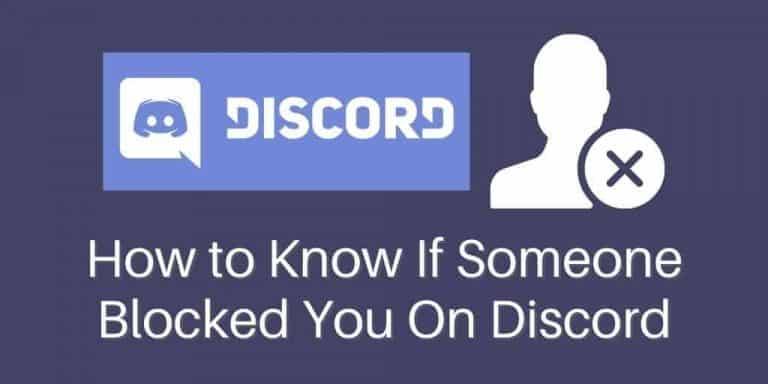 How to know if someone blocked you on Discord? Well, it is not as complicated as some might think. I have this question and looking for an answer; this article is the best source.

So, keep reading and learn the simple steps to find out who blocked you on the Discord platform.

You might be perplexed as to why some Discord members go inaccessible or invisible after a prior chat. Regardless of your internet woes, they have blocked you. When you’ve been blocked, you can no longer use that account to communicate with them.

There are a number of ways to find out whether you have been blocked. Because the respective individual has decided to avoid you, you have no choice but to accept it.

Continue reading to find out more specifics about the steps involved.

Introduction to Discord and Its Functionality
What Makes Discord Unique?
Discord’s wide range of features has made it a popular location for gamers to meet and speak with others.
There are several options when it comes to configuring a Discord server.
Discord can be used even if you don’t have access to a gaming PC.
Let’s Get to the Main Point; How to Know if Someone Blocked You on Discord?
For One of These Reasons, He Would State That Your Communication Could Not Be Delivered.
So, How to Know if Someone Blocked You on Discord without Sending a Message?
Mentioned Below is What You Should Do
What Steps Can I Take if They Have Blocked Me?
Frequently Asked Questions
What will happen if you block a user on Discord?
Why don’t I get a notification from Discord mentioning I am blocked?

Introduction to Discord and Its Functionality

Before we learn how to know if someone blocked you on Discord, let’s learn about its functionality. Skype, Slack, and TeamSpeak-style chat apps like Slack are all variations on the theme of Discord. It’s designed with gamers in mind. It creates a place to connect, collaborate, and communicate with one another while they’re having fun. Video calls, voice chats, and text messages are all options for consumers.

If you’re a PC gamer, Discord is a must-have app. In addition to its easy to communicate nature, this program has plenty of search tools. Those tools let you locate other users and quickly add them to your friends’ list for future contact. Many individuals use it as a social and organizing tool. That’s, in addition to communicating with one another while playing video games.

In fact, many gamers have recognized Discord to be a semipublic platform with a forum-style platform. This is particularly because of its wide range of features, including the ability to build or join “servers“. Those servers are both private and public for groups of individuals who have a common interest.

In addition to gaming, you’ll discover public Discord servers devoted to various areas. Namely, anime, cryptocurrencies, self-improvement, and even simply meeting new people and having a good time! Assume that you want to discuss anything on Discord.

In that case, you don’t have to wait for someone else to build a server for you. Discord.me, Discordservers.com, and Disboard.org are good locations to look for public servers. On top of everything, Discord is completely free to use.

If you wonder How to Know If Someone Blocked You On Discord, let’s know more about Discord. Discord is a standout among the many free communication tools available online. This is because of its extensive range of conversation capabilities.

In addition to Skype’s and Slack’s well-known functionality, it also boasts a simple user interface. While using a chat application, you don’t want it to be using up too much of your computer’s resources. Therefore, the developers of Discord have focused on making it the most efficient possible.

Also, if you wonder how to make rules in Discord, this guide is just for you.

Discord’s wide range of features has made it a popular location for gamers to meet and speak with others.

That means the ones who share their interests. You may use it as a messaging app or even a social networking platform. As a chat room program, it’s arguably the most popular, but it also includes a social forum.

This feature is fantastic for organizing participants to enjoy games together. Discord isn’t necessitated by playing video games in order to benefit from this platform. With that said, you can easily connect with friends on a private server or find others with similar interests.

Besides, if you are experiencing issues like you are being rate limited In Discord or Discord stream no sound, here are the top solutions for you.

There are several options when it comes to configuring a Discord server.

For instance, configuring roles for administrators, and moderators or even creating a unique position for the most active users. There are many advantages to having different member roles. Easy administration, rewards for active members, and giving them varying access rights are only a few examples.

Discord can be used even if you don’t have access to a gaming PC.

That is because it can be accessed via a variety of methods. Moreover, it has desktop PC software that can be downloaded and installed on your computer.

In addition to that, there’s a web-based edition and an app for mobile devices that you may use simultaneously. That means you may speak with users in your Discord servers from any location. That brings a better social experience.

Let’s Get to the Main Point; How to Know if Someone Blocked You on Discord?

Now that we read about other aspects. Let’s learn How to know if someone blocked you on Discord. Sending them private messages is the quickest way to see whether they’ve blocked you.

For the most part, when it is possible to send a user a message. In that case, it means they haven’t blocked you yet. So, that’s the quickest and easiest method How to know if someone blocked you on Discord.

The chat logs with a respective user will show you that you’ve been blocked right immediately. Error messages will be shown to you by Clyde, Discord’s official bot.

For One of These Reasons, He Would State That Your Communication Could Not Be Delivered.

Clyde includes a new link to a detailed list of probable reasons why you’re prohibited. However, interestingly, he refuses to explain why you are unable to message the individual.

However, assume that you previously spoke with this person and are suddenly unable to send them messages. In that case, you are most likely to have been banned at some time.

Check the friend list to see if you have added the individual as a friend. That’s another indication that they may have barred you. So, that might not be the best way to learn How to know if someone blocked you on Discord.

So, How to Know if Someone Blocked You on Discord without Sending a Message?

The good news is that there’s a second technique to see if someone has barred your account. A message isn’t necessary to discover that your efforts were in vain. Our little trick will benefit from the emotes on Discord, which may be used at any time and any place.

It’s a good idea to add a reaction to a message on a server. It should be a sever where both the parties are in if you were barred. If they haven’t blocked you, the emoticon will show. Also, the screen of the PC will vibrate.

People who utilize mobile devices have a clearer indicator. There is a “Reaction Blocked” indication on it. You’ll know that somebody has banned you at this point.

There’s one more method if you wonder How to know if someone blocked you on Discord. However, it does need to send something else. Instead of a message, send them a friend request.

Mentioned Below is What You Should Do

What Steps Can I Take if They Have Blocked Me?

Since the existing account hasn’t any way to contact the other user, there is little to do. A new Discord account can be created. However, if they don’t accept messages from non-friends, you’ll have no choice except to contact them via another method.

Next, you might approach some of your common friends for assistance. Mutual friends that are not blocked can nonetheless assist mediate.

Now that you know How to know if someone blocked you on Discord. Let’s read some common FAQs.

What will happen if you block a user on Discord?

When you restrict someone on the Discord platform, their messages are no longer visible to you. If you and your friend are still using the same server, you may see the message “1 Blocked Message”. A strong reminder that you’ve blocked the individual. If you’re interested enough, you can find out what the message says. If you like, you may continue to browse the channels. Alternatively,

Why don’t I get a notification from Discord mentioning I am blocked?

When it comes to barring other users, Discord has a “no evidence and no alertness” policy. The approach is intended to keep consumers from discovering this and having a major issue out of it. You won’t know whether you’ve been blocked until you actively want to learn about it.

So, that is all about How to know if someone blocked you on Discord. If you have other questions related to this matter, please let us know.

How to Add, Run & Delete Roles in Discord

How to Tell if Someone Blocked You on Discord?

How to Stream PS4 On Discord with Easy Steps?