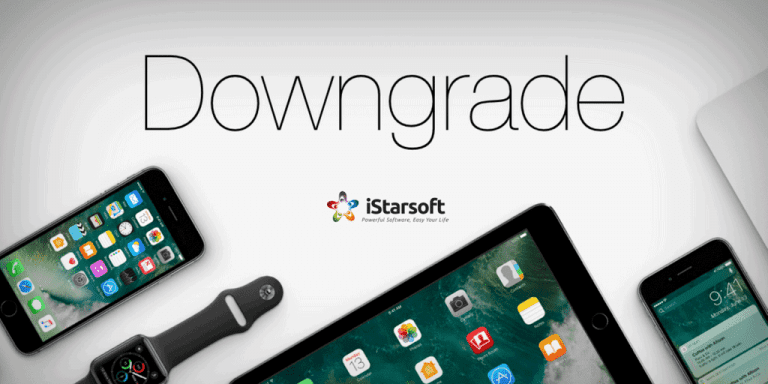 Apple introduces upgrades to their iOS versions in a timely manner. These upgrades, of course, come with a range of new options.

However, every iOS update is associated with a range of restrictions too. Some of these updates bring changes to the iDevice, and some users aren’t aware of them. The restrictions of newer iOS updates can bring some dissatisfaction to its users.

So, many iPhone/iPad users want to go back and downgrade their iOS versions to a familiar, older version.

According to Apple, downgrading iOS is possible through iTunes only. In other words, they say that you cannot downgrade iOS without iTunes.

But, in reality, iTunes is not the most admired tool offered by Apple. That means that many iOS users don’t like to use iTunes due to various reasons.

Part 1. Why does an iPhone user need to Downgrade iOS without iTunes?
Part 2. Things you need to downgrade the current iOS
Part 3. Creating a backup of your iPhone before iOS downgrading
Features of dr.fone – Phone Backup (iOS)
How to create a backup before downgrading the iOS
What Makes Tinyumbrella a very useful tool?
Part 4. What to do if your downgrading process fails?
Here is a list of features associated with dr.fone – System Repair (iOS)

Part 1. Why does an iPhone user need to Downgrade iOS without iTunes?

iDevice users may want to downgrade iOS without iTunes to an older version for several reasons. In this section of the article, we will emphasize those reasons.

01. In general, Apple adds certain restrictions with each upgrade. So, it can be frustrating for an iPhone user to experience restricted feelings after an upgrade. To experience the previous version’s benefits, you should go for a downgrade.

03. Some users have gotten used to the features and functionality of their current iOS device. In other words, they aren’t just ready to abandon their favorite iOS.

04. Some iOS upgrades tend to have bugs, and some of these versions lag. You can notice these errors, particularly as a result of the initial release of the upgrade.

Part 2. Things you need to downgrade the current iOS

The firmware of the iOS device will be cracked, and SHSH blobs also will be saved. Because of this, the users can find that the firmware exists when the OS is downgraded.

Well, all these terms might surely sound pretty complicated, particularly to a novice iOS user. So, it is strongly suggested that you read plenty of stuff before downgrading.

Part 3. Creating a backup of your iPhone before iOS downgrading

One of the most important things you should consider before ‘Downgrade iOS without iTunes’ is to create a backup. Without a backup, you will lose all the important data in your iPhone.

In fact, creating a backup must be done regularly, even if you will not downgrade the iOS. That is because these backups can help you recover data in any issue.

To accomplish this task, Apple has provided you with an option. That is the iPhone. Although iTunes is a handy tool, it doesn’t create backups of multimedia files.

In this case, you will have to go for a third-party tool. Well, there are plenty of tools to create backups of iPhones. However, it is better to go for reliable and efficient software like dr.fone – Phone Backup (iOS).

This respective software is capable of creating comprehensive backups of your iPhone. Moreover, this software lets you back up iPhones with simple and powerful steps. In a nutshell, dr.fone – Phone Backup (iOS) is an all-inclusive backup creator for iPhones.

How to create a backup before downgrading the iOS

Now, let’s take a look at how to create a backup before downgrading the iOS of your device.

01. First, you should get the software downloaded and installed on your computer. Then, you should start dr.fone – Backup & Restore (iOS). Go to the option called “Phone Backup.” It is located in the tools list.

Once selected, you can connect the iPhone to the computer through the USB cable. Be sure to use the original USB cable to prevent potential interruptions.

02. Now, select the Phone Backup option to create a backup.

03. Now, you should choose the contents that need to back up. You also should select a target folder on which your data will be saved after the backup.

Now, you should click on the backup button to start the process. The data on your iOS device will be sent to your computer as a backup.

05. After creating a backup, you can Downgrade iOS without iTunes. The most important point at this stage is to jailbreak your iPhone. However, you must know the consequences of jailbreaking.

For instance, the device’s warranty will be unavailable after performing a jailbreak. Once your iPhone is jailbroken, any third-party software can be installed on it. That is exactly why Apple doesn’t encourage jailbreaking of phones.

But, to get the expired warranty, you will have to restore the phone using a regular iPhone backup. That said, here’s how to jailbreak a phone before a downgrade.

Steps to Downgrading iOS without iTunes

01. First, you should download TinyUmbrella for free. You can find a download link for that software too here.

02. After the installation, you will have to open the software to continue.

03. Now, you should connect the iPhone device to the computer using the USB cable. Once the device is connected, you should wait only for a moment. The software itself will detect the device automatically.

04. Locate the button called SHSH and click on it. It will let you save an encrypted version (126-bit).

05. Just below the option called Save SHSH Blob, you can see a button linked to the TSS server. You should press this button to proceed to the next level.

06. After the server’s job, you will be notified with an error 1015. Just proceed by selecting the Exit Recovery option. It is located under the recover devices option.

07. Now, you should click on the advance option. Then, make sure to uncheck the box highlighted. Well, that completes the process.

Important: You will have to save the SHSH Blobs again after the process. Such an approach will let you downgrade the firmware. The device will be restarted automatically, and the downgrading of the firmware will begin.

Here are some obvious advantages associated with Tinyumbrella.

Well, that is exactly how you can Downgrade iOS without iTunes. The combination of Tinyumbrella and dr.fone – Phone Backup (iOS) makes the overall process easier.

Before performing a downgrade, however, you MUST create a backup of your iPhone. That is to avoid any potential data losses.

Part 4. What to do if your downgrading process fails?

Usually, the downgrade should take place within a couple of minutes. Even if you are using the most reliable software tools, failures may happen due to one reason or another.

What should you do if your iPhone downgrading is failed? Many users have complained that they experienced various errors when downgrading from iOS 12 (Beta).

If you experience any issues after an attempt to downgrade your iPhone, you don’t need to panic. There is a very easy solution to fix such issues, thanks to modern technology.

In this case, we will be using another sophisticated software developed by dr.fone. Namely, it is dr.fone – System Repair (iOS). In the last part of our article, we emphasize the features of this software. You can use this software to fix any issues related to iOS versions.

If your iOS is stuck during a downgrade process, you should straightaway download dr.fone – System Repair (iOS). It comes as a useful kit of tools that can address various issues related to iOS.

By far, this respective tool is considered to be the best iOS recovery tool available today. As of today, a large number of iOS users have used this software and succeeded.

Here is a list of features associated with dr.fone – System Repair (iOS)

Now that you know how to downgrade iOS without iTunes, you can try it. Be sure that you create a backup before downgrading your iOS to prevent potential data losses.

Even if you failed with a downgrade attempt, you could fix it using dr.fone – System Repair (iOS). The tools mentioned in this article are “must-have” stuff if you are an iPhone user. Good luck with downgrading iOS without iTunes.

How to Check if iPhone is Unlocked without SIM Card?

Want to Listen to Phone Surrounding Live for Free?