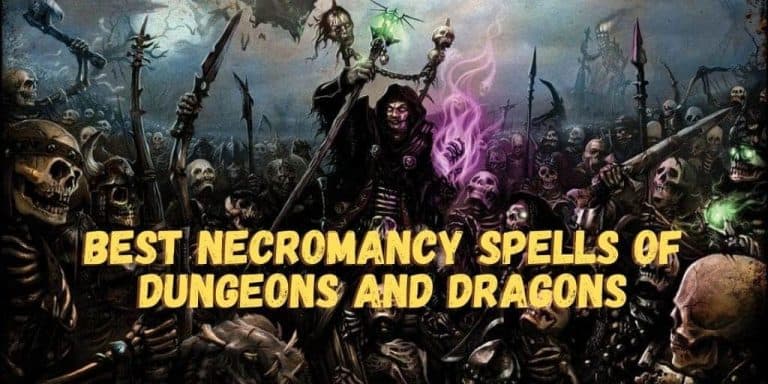 Below is a typical scene you can envision with necromancy magic in Dungeons & Dragons. The tabletop game of Dungeons and & Dragons has necromancy spells that allow you to alter the life and death forces.

Imagine that the priest is wearing a black robe while delivering his eulogy at the funeral. As soon as he put his hands with his palms facing down on the casket, black smoke starts to release from his palms. The body of Piotyr sits straight and then turns to face the people sitting at the funeral. Everyone starts to shout, but the highest scream is from the mother.

This is one of the most taboo magic, and people who partake in it are considered evil persons. They are regarded as people who modify the natural cycle of life and death by worshipping demons and dark gods. Thus, necromancy is considered evil and sick.

However, you can use necromancy in the Dungeons and Dragons game without being called evil. You can use it to take lives and save lives. It is one of the most powerful spells used in this game. In this article, you will learn the best necromancy spells you can use in the game’s third level or lower.

You could be in the worst condition as a caster with low hit points, low AC, and useless melee attack choices. This is where the Vampiric touch necromancy spell can help you.

It is a level 3 concentration spell that casts a melee spell attack on the touched creature. The result is you getting hit points equivalent to half of the 3D6 necrotic damage on the creature. With concentration, the spell can be re-used too.

This is another of those necromancy spells that deal with the force of life. Revivify is a special clutch option that caters to the living and can inject life into a dead creature. The condition is that the target creature must have died at the last minute only.

This level 3 spell re-livens the touched creature along with getting you one hit point. However, it cannot restore damaged lives or make a brutally dead creature alive.

Besides, if you are looking for glorious samurai games for PC and PS4 consoles, just click to read more.

This is one more life-saving necromancy spell that can give enough living time to the touched creatures. The spell is used to instantly stabilize any dead creature with 0 hit points.

As a result, the creature gets enough time to heal better. It is a cantrip spell that artificers and clerics can use. This spell is great for damage control as it is a cantrip that doesn’t need any pre-prep or spell slot but only action for casting.

From the world of the life-saving necromancy spells 5e, Life transference comes out as a spell that helps allies. It is a level 3 spell from the Xanathar that inaction can cause 4D8 necrotic damage to the necromancer.

This is accompanied by another creature in the 30-feet range gaining hit points twice more than your necrotic damage. However, the wordings of this spell cause the negation of any immunities and resistance to the necrotic, which is a disadvantage.

You can hit plant creatures, and magical plants with this spell for damaging their con saves highly and putting them to a disadvantage. For every 5th level spell slot, the damage increases by 1D8. The spell can even damage non-magical plants.

Out of the deadliest necromancy spells, the Inflict Wounds is known for the unimaginable damage it casts. However, using this spell exposes the caster to the melee range. The spell casts a melee spell attack on the touched creature and causes 3D10 necrotic damage to it.

It is a simple spell for just killing your opponents. When used on Toll the Dead, the spell can bounce back on you too. Don’t use it on the undead and expect resistance to the spell.

This is one of the other Xanathar’s necromancy spells 5e of the level 1 concentration. It works on a creature that throws Wisdom save. It makes the throw fail and frightens the target creature.

The result is the target unable to move closer to you and disadvantages in its attack rolls and ability checks. You can use this spell at the higher levels for targeting plus one creature on every next level. This spell doesn’t work on undead and constructs.

This is one of those necromancy spells that can deafen or blind the target creature. It can be cast when the target throws a Constitution save. Upon failure of the save, you can choose to cast any of the spell’s effects.

This level 3 concentration spell can be cast upon the target creature when it makes a Wisdom save throw. When the throw fails, the spell can have three effects, cast additional 1D8 necrotic damage, damage on the ability checks of the target, and throw saves with one ability score or damage on the attack roll of the target or ability to make re-throw at the next turn. You can create your own effect too. If the spell fails, nothing is done in action.

A unique one out of the damage necromancy spells 5e; Animate Dead is a de facto spell, which can let you control the undead. It is a level 3 spell with one minute effect time. It lets you create and control skeletons or zombies as per the material you choose to build.

Then, you can command that creature to gain bonus actions. You can create unlimited undead creatures with it, but you would lose control of them after 24 hours. Animating a skeleton or zombie can help you in various ways, such as carrying items, constructing castles, and guarding places.

PS: if you are looking for the best Spyro game, just click to read more.

This is a level 3 spell that can let you gain information from even dead creatures. The spell casts a life essence and intelligence to the dead creature for making it answer five questions of yours.

However, it can give you information on only those things it was aware of while living. It can even lie to you if it thinks you are an enemy creature. You may even get unclear answers, but you can use the info smartly to prevent dangers, find prizes, etc.

This is a level 2 spell from the group of nasty necromancy spells 5e that has no save requirement. The spell acts with a batch of energy acting on the target creature and its surroundings.

Upon hitting, it reduces the powers of the affected creature’s attacks. The targets can end the spell by throwing a Constitution save at their turn. If successful, you get hit with half the intensity of the attack, and if failed, you get saved from two attacks essentially.

This is one of the other Xanathar’s powerful cantrip necromancy spells 5e. It can damage all other cantrips. You can cast the spell to instigate a Wisdom saving throw from the target creature in the 60-feet range.

It can deal 1D8 or 1D12 necrotic damage to the creature. It is the only cantrip spell that gives the D12 access to casters. Additionally, its wisdom saving throw is highly reliable. However, the necrotic damage is resistible too.

Out of all the saving necromancy spells, Gentle Repose can be used in scenarios when no other life spell can help you. It is a level 2 spell that can be cast to save an ally in the game.

The spell protects the dead target creature from decay, becoming the undead by freezing it for 10 days. It gives you time more than other life spells to act. You can also cast this spell on the same creature numerous times.

False Life is one of the necromancy spells 5e that you get in the first level, which provides your action with 1D4 + 4 short-term hit points for an hour. This keeps your spellcaster active in the initial levels.

However, if you stay up to fight for an additional turn or roll a death save, then it can cost you a few points. When you use this spell with the second level spell slot or more, then you receive five extra temporary hit points with every advanced level.

15 Best Snowboarding Games You Must Look Out For