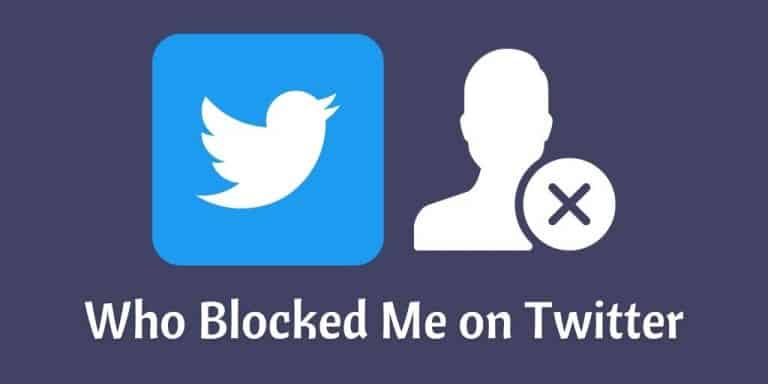 “Who blocked me on Twitter? Is there a way to find it out? If Twitter gives an official method, please let me know. If not, I am happy with a third-party tool as well. Thanks in advance!”

What is Blocking?
Blocking an Account on the Twitter Platform
What Does Happen if You Are Blocked by Someone?
Will Twitter Give You a Notification Whenever You Are Blocked?
Who Has Blocked Me on Twitter? Can I Get a List of Them?
Who Has Blocked Me on Twitter? How to Check It?
Third Party Services Can be Handy
Frequently Asked Questions
Is It Possible to Block a Person on Twitter Without Letting Them Know?

Before we learn who has me blocked on Twitter, let’s pay attention to some basics.

Blocking on Twitter is like being put in a virtual prison. When you block someone on Twitter, they can’t view your profile or send you tweets or messages.

When an account bans you, you can’t read their profile or any information they’ve uploaded. You can’t tag them in posts, images, videos, or anything else.

Their posts and material will not appear on your timeline. Their tweets won’t even show up in searches. So, you would be fully barred from the person’s profile.

Do you really want to understand how the blocking function works on the Twitter platform? If so, keep reading.

What Does Happen if You Are Blocked by Someone?

However, if you tweet them, they’ll receive an alert notifying them that you have pending tweets for them.

Before we learn who has me blocked on Twitter, let’s learn a couple of other important things as well.

Will Twitter Give You a Notification Whenever You Are Blocked?

It’s good to see that Twitter hasn’t completely abandoned the idea of blocking users. The primary goal of banning someone is to protect the two accounts from getting into any sort of conflict.

Because of that, Twitter has made this process as secretive as possible. That’s why Twitter doesn’t notify you when you’ve been blocked by someone.

Additionally, if you choose to ban someone on Twitter, they will not be notified of your decision. You won’t know who blocked your profile on Twitter until you grow suspicious and investigate the person’s account.

Third-party programs may be able to tell you how many users have banned you on Twitter. But the truth is that Twitter itself does not have such a program as an official option.

There are many third-party tools to match this requirement. With a simple internet search, you can find those tools.

Such services inform you of the total Twitter profiles that are attempting to prevent you from using their services. That is OK, but it doesn’t reveal anything about who those accounts belong to.

So, that’s a pretty detailed answer for those who wonder who blocked me on Twitter.

A variety of websites, programs, and applications say that they can find who blocked me on Twitter.

Twitter lets you modify their feeds and exclude items that they don’t expect to see from their feeds. Blocking someone is an option. You’ve come to the correct spot if you’re unsure if you’ve already been blocked on the Twitter platform.

We’ll go through how to see who has me blocked on Twitter. In addition, we’ll provide some pointers on how to block someone secretly or prevent viewing particular words.

Who Has Blocked Me on Twitter? How to Check It?

On Twitter, do you believe that you have been banned? If so, the program does not provide any information about who did it or when. However, this does not rule out the possibility of identifying the person who has blocked you.

Specifically, you can see who has unfollowed you on Twitter by going into your account’s “Unfollow” option. The procedure takes a little time.

But, by any chance, you may finish it quickly if you’ve got a certain user in mind.

You’re not banned if you can read their profile. If you notice “You’re blocked,” that indicates you have been prohibited from seeing any of the respective user’s Tweets.

It is true that it sounds pretty bad. However, Twitter has a good rationale for deciding not to notify users when they’ve been banned.

In other words, blocking a person is all about avoiding encounters that aren’t essential or requested.

To protect its users’ confidentiality, Twitter does not reveal the identities of those who have blocked you. If you block another, the same is true.

Third Party Services Can be Handy

So, this might not be the solution if you wonder who has me blocked on Twitter. Instead, it works only to find out the number of users. Mentioned below are the steps you should follow to use Blolook.

Is It Possible to Block a Person on Twitter Without Letting Them Know?

As previously stated, the person you’ve blocked will not be notified of your decision to do so. However, if they go to your profile, they may see that you’ve blocked them.

Remove people from the feed by unfollowing or muting someone on social media platforms like Twitter and Facebook. However, you won’t be able to view their updates on the timeline because of this.

Users who have their accounts muted will not be able to see that you’ve done so. Muting the account does not imply unfollowing it.

The individual is still shown as one of your followers, but you’ll not get any more updates from them. As a result, you will continue to get alerts about messages that reference or reply to you.

The option to mute a profile you aren’t following is also available. Then you won’t be notified when that individual responds to or mentions you in a post or comment. You may mute someone from a specific tweet or their profile on Twitter.

A Tweet Can Be Muted by Following These Steps:

There is no way to see who has blocked you on Twitter. You won’t receive alerts when you’ve been blacklisted since the app does care about safeguarding your privacy.

Search the user’s profile to see if they’ve blocked you if you believe that they have. You may also discover how many individuals have blocked you by using third-party tools.

You cannot see who has me blocked on Twitter but think of it the other way around. If you block one of the other users, they won’t find it. Isn’t that a relief?

So, that’s all about who blocked me on Twitter. I hope it helps!

How to Hide Likes on Twitter from Other Users? – 3 Solutions!

Different Ways on How to See Deleted Tweets