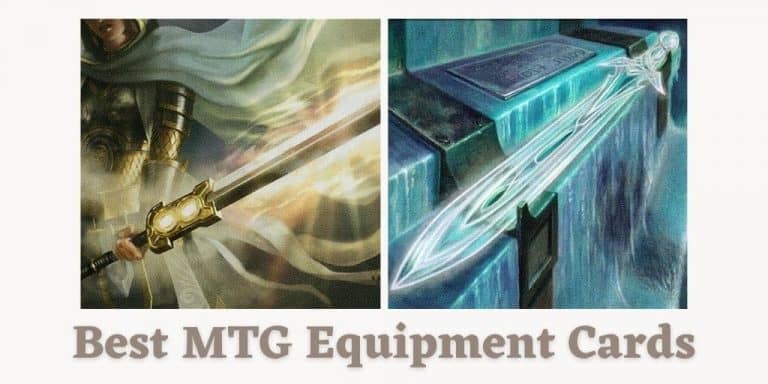 Loxodon Warhammer has been a pretty decent equipment card to use. Appearing in boosters of 2003’s Mirrodin set, it has been one of the first equipment cards that came up. It’s a pretty simple and straightforward card but never underestimate it. Getting a buff of +3/+0 for a start, with that damage, bringing trample to the creature really made it a treat to you. Well, at the same time, you are trying to kill the creature with Loxodon Warhammer. It’s gaining life all the time.

Loxodon Warhammer can either make a cheap and useless creature into something you have to pay attention to or create a powerful creature even more powerful. With its insane traits and buffs, the Loxodon Warhammer will surely be one of the best MTG equipment.

PS: here are the MTG Best Angels and MTG Best Planeswalkers for your reference.

Even though this card requires some artifacts to make it worthwhile, Cranial Plating is still a powerful card in many cards. Not only that the equipped creature will get a significant amount of damage boost for a low cost, but you can also equip it instantly for two black mana. Cranial Plating is not the only equipment to do that, but it’s argued to be the top five equipment card.

Unlike Loxodon Warhammer, the Cranial Plating does not provide any traits, but it can also make some creatures more powerful than you think for boosting power and the low price. Who doesn’t want to attack with a 9/1 Vault Skirge?

Remember when I said the Lightning Greaves is suitable for a commander format? The Blade of Selves can do a great job in commander format too. It only cost two mana of any color to cast and cost four mana of any color to equip. A reasonably low price for its ability? Deal. The creature that had Blade of Selves on has myriad, in which a token copy is made for each opponent. Each token creature attacks one opponent. The Blade of Selves works even better with ETB ability. Also, any commander creature can equip this power, which can easily lead to your victory. Attacking with a “few” more copies of your prominent scary commander at the same time, why not?

Also, here is everything about the most strong MTG Werewolf Commander Deck for your reference

4. Sword of Fire and Ice

A +2/+2 stats boost is now commonly seen in the best equipment cards. Getting protection from red and blue, on the other hand, is pretty rare and valuable. It protects you from spells and effects from these colors. Not only that, you can draw a card and do two damage to a creature or player. Altogether, this legendary equipment will give you a devastating advantage on cards and will surely be on the best equipment card list.

Like its name, if you equip it to a creature, it will feel like a godsend. It requires white mana to cast, but at least its equip cost is three colorless mana, and things start to get better from here.

It brings the buff of +3/+3 stats at first. Not only that, it shines from its abilities. If the creature with Godsend gets blocked, it can instantly exile one of those creatures (before combat applies). As a matter of fact, your opponent cannot play any more copies of the creature exiled by this ability.

Godsend will be wondrous when equipped on to an attacker, in which the creature will be “unstoppable” when trying to break the defense of your enemy creatures. Either the stats boost or the ability of Godsend brings a significant benefit to the equipped creature. With the high stats, your opponent will somehow manage to use their powerful creature to block, and poof! It’s gone. Godsend will be excellent equipment to break down the enemy defense to let your own creatures deal decent damage. One of the best MTG equipment? Sure.

Being another piece of equipment with a decent stats boost, the Nim Deathmantle is pretty much worth its cost. Two mana of any color to cast, and four mana of any color to equip. The equipped creature turns to a black zombie and gets 2+/2+ for its stats. Not only that, you can bring creatures back to life. If one of your non-token creatures dies, you can pay four mana and get it back to life, with Nim Deathmantle equipped! Did you die? Nah, come back and do some work!

The Nim Deathmantle is counted as one of the best equipment in MTG because of its infinite revival ability and, of course, its stats boost. Whenever you revive a non-token creature, you are able to revive another due to its equipped Nim Deathmantle. However, be sure you have enough mana to revive all these black zombies with high stats.

Many decks use this equipment card and will use it with a creature that has only one toughness. Using this way will increase the speed for either their land growth or their development of creature numbers.

Besides, if you are searching for the MTG Biggest Creatures Cards, click to read more.

The Basilisk Collar can work well with many combinations. Think of Niv-Mizzet the Firemind with Basilisk Collar, which can kill a creature whenever you draw a card. You can also play the variety of Basilisk and Avenger or three colored Oros. They can clear all the non-white creatures when their ability is triggered.

Combining with any creature, either a commander creature or a wretched creature, can prove its worth. Equip it with your commander creature, and it can make it more powerful with the deathtouch and heal a significant amount of life to yourself. When you equip it with a cheaper creature, this creature will turn into something that your opponent needs to pay attention to and will do a terrific amount of damage if not killed. That’s why it’s one of the best MTG equipment.

Some of the equipment cards are great in Legacy or Modern, but Lightning Greaves is Commander staples instead. Even though the equipped creature won’t get any buff on its stats, it will get shroud and haste. Shroud is a trait that will bring the creature max protection, as it cannot be targeted by any spell or abilities. It will be ideal for your expensive commander creature as unknown abilities won’t just exile it. The haste allows your creature to hit the ground running.

Lightning Greaves is counted as one of the best equipment in MTG because of its use of protection. In many matches, your expensive, powerful creature that you worked hard for will just be exiled by any abilities or spells (in which many cards in MTG have the ability to exile targets). With the Lightning Greaves, your commander creature will be well protected and will have the time to do its job.

Most of the equipment cards come on the battlefield and wait for a creature to pick them up. Batterskull is different. It has the Living Weapon ability and enters the battlefield with a 0/0 black Germ creature, equipped.

It’s argued to be the best equipment with Living Weapon, and people don’t care it costs five mana to cast or equip. The Batterskull has a 4/4 lifelink and vigilance and is ready to attack immediately. If you don’t want it on the black Germ creature, you can pay five mana to equip it on any creature you like. As a bonus, pay three mana, and you can return it to your hand. This ability can prevent it from being destroyed, and when you cast it again, you got a new germ! Who doesn’t want an army of embryos ready to fight?

Batterskull is one of the best MTG equipment because of its usefulness against commander cards and different combinations. Artifact removal? Nah doesn’t work for me.

That’s pretty much it for the ten best MTG equipment cards. Even though equipment cards are only a support for your creature and are not the cards that really do the job, they are still essential. Some of them can provide you protection for your commander creatures. Others can even bring you opportunities for victory.

Here Are Some Games Similar To Overcooked 2