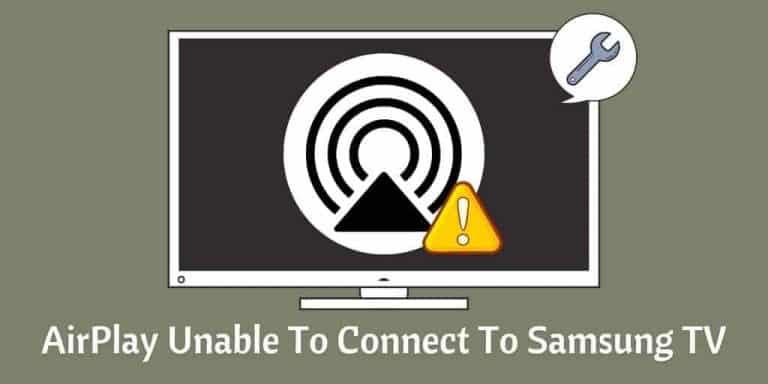 People nowadays frequently project their smartphones on their televisions for an improved viewing experience.

It can showcase their phone’s screen, stream videos, view movies, and display other files from their phone to their TV.

AirPlay is a fantastic technical breakthrough that enables you to project audio or video from your iPhone, iPad wirelessly, or Mac to your Samsung TV.

So, what should you do if AirPlay is not functioning, is not showing up, or your airplay cannot connect to Samsung TV?

If your Samsung TV AirPlay is not functioning, is not showing up, or is not playing, try upgrading the software on your TV, making sure AirPlay is enabled, upgrading the smart devices you are mirroring with, and connecting the TV and smart device to the same WiFi network, among other fixes.

Modern technology has enabled people to access realms that did not appear to be imaginable even 20 years ago. Samsung TV customers may transmit an infinite amount of material from their smartphones directly to their TV screens by using AirPlay.

If your Samsung TV AirPlay is not functioning, not showing up, or is not playing, keep reading to figure out the problem and how to solve it.

What Exactly is AirPlay?

AirPlay allows users to wirelessly stream entertainment from an Apple device to their TV or speaker. To operate it, you must have an Apple TV, an AirPlay-compatible TV, or another AirPlay device. AirPlay Mirroring displays exactly what is playing from the device on the TV screen.

Please connect the iDevice or Mac to the same local WiFi network as the Apple TV. The AirPlay option will appear in various applications, including Photos, Music, TV, and Safari.

Also, if you wonder, what is the most effective solution to use when your Smart View not working? In this article, let’s show you the reasons and the simple solutions.

You can occasionally encounter the “Airplay unable to connect to Samsung TV.” When you switch on airplay on a Samsung TV, and in case it does not turn on, or you have problems turning on airplay, or airplay is not operational on a Samsung TV, the troubleshooting steps listed below will assist you in resolving the airplay problem.

It is important to note that the AirPlay issue on your Samsung smart TV might be caused by a variety of circumstances. It might be a problem with your WiFi Internet network connection or with your Apple AirPlay settings.

You may forget to upgrade your Samsung smart TV OS or iOS mobile device to the most recent version from time to time.

Luckily, there are a few simple solutions to this problem.

You See A Black Screen

There are very few things more disconcerting than switching on the Samsung TV, being aware that the power is on, but still seeing a blank screen and falling victim to the problem of “Airplay unable to connect to Samsung TV.”

It might keep Samsung TV users frantically trying to figure out what is wrong but remaining in the dark despite their best attempts. If the Samsung TV’s AirPlay is not functioning and only a blank screen appears, keep reading to learn a remedy that may bring everything back in good condition.

Update your Samsung TV by heading to Home > Settings > Support > Software Update > Update Now. This will allow your TV to be automatically updated whenever new software becomes available.

In some cases, the Samsung TV screen mirroring is continually disconnected. Hence, to address Airplay’s unable to connect to the Samsung TV problem, follow the steps given below.

Not Showing Up on Control Center

Airplay is a built-in capability that does not require any additional software to operate. However, some users have claimed that the AirPlay icon does not appear in Control Center, iTunes, or the Mac Toolbar, leaving them unsure of how to watch content on an Apple TV or other Airplay-enabled device.

If you are in this situation, use the methods below to resolve the problem.

Make Sure Your Device is Compatible

There appears to be some uncertainty over which devices are AirPlay compatible. The first step in troubleshooting the airplay unable to connect to Samsung TV problem is determining whether or not you have an AirPlay-compatible TV, speaker, or other devices.

Apple’s website lists which devices enable AirPlay 2 and AirPlay. AirPlay may not be functioning because the device is incompatible.

To Easily Verify if Your iPhone Has Airplay:

Besides, let’s figure out how to fix the Samsung TV Turns On By Itself

Connected To The Same Network

To utilize AirPlay, all the receiving and sending devices must be connected to the same WiFi. This enables the functionality to recognize all AirPlay-compatible devices on the connection. On an Apple device, go to Settings > WiFi and look at the network name you are currently connected to.

On a Mac, please click the WiFi icon in the menu bar to see the name of the network you are now connected to. Users of Apple TV may view their current network status by going to Settings > Network. If you link your TV through Ethernet, ensure it is linked to the same router as your WiFi network.

Your failure to link to AirPlay with your iPad and the problem of encountering the airplay unable to connect to Samsung TV may be due to the reason that you are using an out-of-date iPad update.

To check if you have the latest version, navigate to “Settings” and select “General“. From the “General” drop-down option, choose “Software Update“. If an updated version is released, it will be downloaded.

If your devices are turned on and upgraded, the following step is to restart them quickly. A restart may appear simple, but because it clears the RAM and shuts any applications operating on your gadget, it might aid in resolving technological issues.

Ensure your firewall is not blocking the connection if AirPlay is not functioning on your Mac. It is possible that a policy in your firewall is preventing the AirPlay link, creating the airplay unable to connect to the Samsung TV problem.

Fortunately, you can view and alter all of the apple firewall parameters with a few mouse clicks. This is how it is done:

ApowerMirror is a leading mirroring application that allows you to reflect your Android handset to a Windows PC. It is quite simple to use. Just install this application on your PC and connect your phone to your computer through USB.

What is even more remarkable is that, unlike other screencasting applications, ApowerMirror’s superior setup allows it to be used immediately, substantially increasing the experience. If you have an Android smartphone, simply sign up for a free trial!

Using the app, your Android smartphone can now be controlled with a keyboard and mouse. As a result, you may use the huge screen to launch apps, send messages, see your picture galleries, and even enjoy mobile games.

Furthermore, you may transfer nearly anything from your desktop to your Android smartphone by just dragging and dropping files onto the scrcpy interface.

Google Cast (also known as Chromecast built-in) is a streaming technology created by Google for use with Google devices. Once all devices are linked to the same connection, it gives a Google device, Chrome browser tab, or application an easy method to broadcast and share content to another screen.

Built-in Chromecast technology is commonly accessible in consumer items such as smart TVs, video game consoles, and media players. Google Cast turns your phone into a personalized remote control for surfing content, managing playing and stopping, and even making playlists.

Miracast was introduced to the market to replace the HDMI connection. This innovation enables us to deliver Full HD video with 5.1 surround sound wirelessly. It was a WiFi Alliance project to share the screen across compatible devices as long as the issuer kept the screen on, which was one of its disadvantages.

Even though it enables us to communicate video material in Full HD resolution, the requirement that the device’s screen transmitting the picture be switched on limits its utility in displaying images and movies captured with the phone on a TV or computer.

If you have run into any of the issues listed above, you may use this guide to resolve Airplay’s unable to connect to Samsung TV issues. They are basic and easy to follow without the need for technical knowledge.

How to Fix iTunes Cannot Locate the CD Configuration Folder