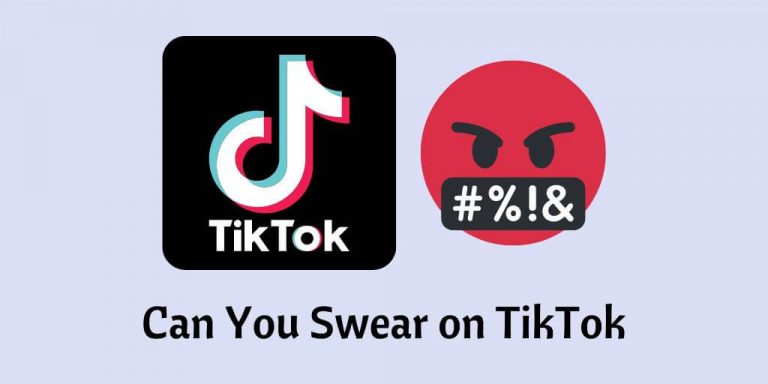 Can you swear on TikTok, or can you curse on TikTok?

What will happen if you use swear words in your TikTok videos?

Will you get a warning or worse?

Let’s answer these questions in our article.

hide
Overview
So, Can You Swear on TikTok?
There’s an Underlying Cause, Though!
So, Can You Swear on TikTok without Getting Banned?
Removing Curse Words
The Impact on Video Captions
TikTok can Even Recognize Alternative Swear Words a Well
Can You Curse on TikTok Comments?
The TikTok Algorithm Plays Fair in This Case
Automatic Blocking of Comments That Have Specific Words
What Sort of Words Are Prohibited in TikTok?
Blocking Explicit Content on TikTok

There are many individuals who talk about the possibility of swearing or cursing on the TikTok platform.

In other words, plenty of TikTok users want to know if it is possible to use curse words. Truth be told, this is an exceptionally controversial topic.

It is true that you can hear swearing words on some videos at least once in a while. However, the vast majority of TikTok users tend to use alternative words for curse words (like “frog”).

So, if you are new to TikTok, you may obviously wonder if it is possible to swear on it. Is it allowed? Or is it banned? Will you be warned or restricted from using TikTok? The remainder of this article explains it all.

Besides, this article will show you how to unfollow on TikTok easily, unfollow someone or everyone, and everything else you need to know about it.

So, Can You Swear on TikTok?

The policy of TikTok regarding the use of profanity in video content is not entirely clear. On TikTok, using profanity is not considered to be against the rules. Doing so will not have your video removed from the platform.

Also, it won’t even end up in violation of the community guidelines. There is one and only one exception to this rule. That’s the utilization of racist remarks or other phrases that are intended to be offensive to particular groups.

For instance, insults directed at the LGBTQ community can call for the removal of the video. In addition to that, further actions will be taken. It is true that it is possible to challenge these takedowns.

However, it is quite unlikely that they will be reinstalled because hate speech isn’t treated lightly on TikTok.

So, the answer to the question “can you swear on TikTok” can be “Yes.” Then, another question arises; why do the majority of TikTokers are very careful about their vocabulary? If not, why do they always try to avoid swearing words or curse words in their videos?

There’s an Underlying Cause, Though!

It is possible that videos uploaded to the TikTok platform that contain vulgar language will not be removed entirely. However, it’s more likely that these movies will be highly censored.

Moreover, they are not likely to appear as frequently on users’ For You pages. Some users have the misconception that even a solitary use of an offensive term might result in a shadowban.

A temporary showband will also harm videos uploaded in the future. This is true even if those films do not include any cuss words themselves.

Also, are you looking for ways to learn how to block TikTok on iPhone/Android/Routers? If yes, here is the detailed step-by-step guide for you.

So, Can You Swear on TikTok without Getting Banned?

Well, it is true that swearing on TikTok doesn’t necessarily ban you on TikTok. However, there are other consequences associated with this.

In addition, if you suffer TikTok no views after an hour you posted the video, here, let’s figure out the reasons & tips that will help you go beyond 0 views on TikTok.

You should ensure that no cussing is audible in the video and that no cussing appears in the film. In addition to that, there shouldn’t be any cussing utilized in any on-screen text or stickers.

It’s a bit annoying that we are required to be careful not to use profanity. This’s absolutely true if we want to attract the widest possible audience.

Nevertheless, TikTok is a huge platform, with users of all ages and from all over the world accessing videos. Therefore, it is TikTok’s responsibility to monitor their algorithms to guarantee that it only displays appropriate information.

The lesson here is that cussing out loud in any TikTok video won’t get you suspended. It will not even have the video taken down. However, this could lead to the content being hidden, resulting in fewer people seeing it.

The Impact on Video Captions

After that, you might be curious about closed captioning for videos. Is it possible to use profanity in TikTok captions? The response is essentially the same as that given previously.

In the same way, profanity in uncut videos will not result in a suspension of your account. It will not even incur the removal of your videos.

The audience for your video on sections called “Following” and “For You,” however, may be diminished. To that end, it should be avoided if at all possible.

When using profanity in descriptions or captions on TikTok, censorship may be more likely. This is specifically because TikTok can detect such actions very easily.

We know that the TikTok algorithms aren’t flawless at identifying spoken words. So, it’s still easy to recognize if a description contains profanity. As a result, you can face harsher punishments for such transgressions.

TikTok can Even Recognize Alternative Swear Words a Well

Thanks to the smart algorithm of TikTok, the platform can even recognize any alternative spellings as well. For instance, if you use a curse word like f*ck, TikTok’s algorithm will take it as a curse word.

But once again, there are some doubts pertaining to this matter. Anyway, there are many individuals who use suitable emojis to represent their curse words.

They say that those emojis are a better option compared to textual curse word alternatives.

Can You Curse on TikTok Comments?

Now, let’s come down to another option. If you have already used TikTok, you know that TikTok comments are rather different aspects.

The truth is that video creators are not able to control the type of comments they receive. In other words, comments are out of the hands of the creator.

In fact, creators can delete the comments that are left by the audience as a general practice.

In addition to that, they can even filter the comments that contain specific words. But in reality, soon after the release of any video, the audience can comment with any word.

The TikTok Algorithm Plays Fair in This Case

It seems unfair to be punished for something that was posted by another person. So, it seems that profanity in the comments doesn’t have any effect on your video.

But if you’re the one making the remarks, are you at risk? We are relieved to report that it appears not to be the case here either.

So, feel free to use whatever language you like in the comments section of TikTok. In other words, the answer to the question “can you curse on TikTok” is a yes.

Automatic Blocking of Comments That Have Specific Words

Video makers on TikTok have the option of having comments containing specific terms automatically hidden.

Assume that you use it to filter out profanity, for instance. In that case, every remark containing that term will be invisible to the general public.

Setting this up requires accessing the preferences menu in TikTok. To accomplish this, visit your profile and then click the hamburger in the top right.

Select “Privacy” and then “Comments” from the drop-down menu. It will open a page that is very similar to the one shown above. Select the option to “Filter keywords,” and then type in the terms you wish to filter out.

The comment, not just the part containing the banned word, becomes invisible if it contains the word in question.

What Sort of Words Are Prohibited in TikTok?

The completeness of any list of forbidden phrases is, alas, unclear. As new slang terms have emerged and gained popularity, it’s possible that TikTok has added them to its dictionary.

Unfortunately, there is no blacklist of prohibited terms for use on TikTok. All profanity and other languages that could be interpreted as hate speech towards any group are, however, off-limits.

Videos may also be removed if they contain certain keywords, such as those referencing drugs, weapons, or violence.

Are you aware that you can restrict inappropriate content on TikTok?

Do you have young children and want to protect them from inappropriate content? If not, do you just want to clean up your feed? Well, this is a terrific option you may consider.

It is true that TikTok already prohibits extremely explicit content (such as nudity or excessive violence). However, the new Restricted Mode allows you to go further.

Here are the measures you should take to activate Restricted Mode:

As a result, TikTok’s restricted mode will be enabled. If you want to turn it off once again, just follow the same steps. To make it a safer option, you should set a difficult-to-guess passcode.

So, that is our answer to the question who has the question “can you swear on TikTok.” TikTok doesn’t really prohibit all profanity, but videos that include it tend to get lower views.

Moreover, videos that contain slurs directed at particular groups may be removed and users’ accounts disabled.

Because of that, it’s preferable to avoid obscenities wherever possible. If you want to know more about this, please let us know. We’d love to know your honest thoughts about this content.

What is Spam Liking on TikTok? How Does It Affect Your Profile?

How to Screen Record on TikTok Effortlessly?

How to Delete Videos on TikTok With Ease?

How to Change Your Voice on TikTok Easily in 2023?