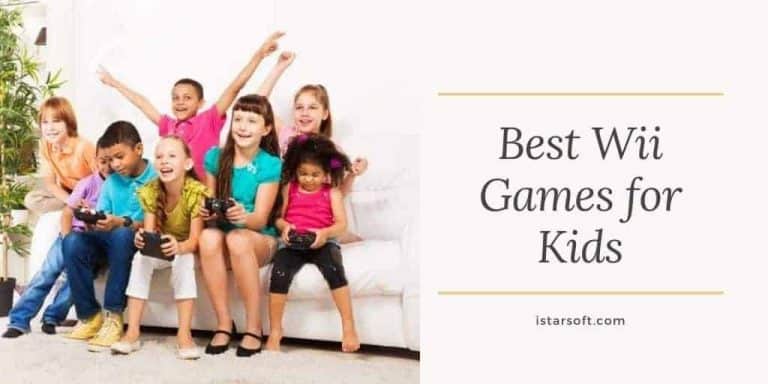 Nowadays, even small kids like to play games on smart devices. If you are having difficulty looking for a game for your kid, this article will provide you with the best answers. You can opt for Wii games to let your kid enjoy and have fun.

Before moving on, you need to know what a Wii is if you have not heard this term before. Wii is a gaming console for homes. Nintendo released the Wii concept in 2006.

Wii is also a great competitor with some well-known gaming consoles such as Microsoft Xbox 360 and Sony PlayStation 3. The major attraction of the Wii is its remote control. Its remote control acts as a motion sensor and pointing device.

Wii games are not only available for adults but also for kids of every age. You can also find Wii games for teens, toddlers, and young kids.

So, let’s move on to our list of the ten best Wii games for kids without further delay.

Dance Dance Revolution Disney Grooves displays some of the favorite characters from the Disney world. Here, your kids can even dress their favorite Disney characters how they want. You need to help them with this interesting task.

In Dance Dance Revolution Disney Grooves, your kids can join in an amusing dance session while meeting up with the gang of Mickey Mouse. It tops our list of the best Wii games for kids.

Nickelodeon Fit is one of the best Wii games for kids. It is going to make your kids jump and get up. This Wii game is designed especially for kids who are under the age of three.

Nickelodeon fit features various popular childhood characters such as the Fresh Beat Band, Kai-Lan, Dora the Explorer, and many more.

Nickelodeon Fit is an awesome game that connects fun with easy workouts. The characters in the game speak out instructions for workouts. Your kid just has to follow these easy instructions.

Wii Sports counts as one of the best Wii games for kids. You get this game along with the gaming console of Wii for free. This game allows your baby to learn how to press the right keys or buttons.

Wii Sports teaches your kid about coordination. For instance, things like what happens when you push a certain kind of button.

In the beginning, you have to direct your kid on how to carry out the correct motions. After a while, your children will be able to play bowling and tennis games.

So, Wii Sports come out as a great pick for your lovely kids.

Go Diego Go Great Dinosaur Rescue is a perfect preschool game for kids. As its name suggests, it is a game full of adventures that keep your kid excited and entertained all the time.

In this game, your kid has to follow some movements and execute them.

Here, your kid’s main endeavor is to assist Diego in his mission. All the characters in the game speak out loudly to help your kid to carry out all the required actions in Go Diego Go Great Dinosaur Rescue.

5. Dora and the Crystal Kingdom

Dora and the Crystal Kingdom is one of the most popular and best Wii games for kids. Most children just love this game a lot. Your kid would love to assist Dora in her adventures throughout the game.

In Dora and the Crystal Kingdom, all characters articulate instructions loudly that help your kid to follow up.

It is one of those games that your children can play by themselves. You can go for this game if your kid is at a preschool level.

It is another great game for young kids from the Wii. It serves as the perfect tool to motivate the budding artist in your kids.

UDraw for Wii features a stylus and an electronic pad. With the help of UDraw, your kid can draw whatever he wants to draw.

Once your child ages, he can learn about photo-editing programs. These programs will help him to enhance his drawings. You can even save the drawings made by your kid on any external storage device. Get a printout if wanted.

So, what can come under the category of the best Wii games for kids than this interesting Wii game?

It is a great game for kids due to the combination of popular cartoon characters and dance. It creates an altogether super fun environment to play in.

Wii Nickelodeon Dance displays some of the favorite characters of your kid from the theme Nick Junior.

Wii Nickelodeon Dance uses music based on several themes of the show, Nick Junior and its older renditions. So, try this out while playing the best Wii games for kids.

8. Dora and the Snow Princess

Dora and the Snow Princess features the favorite character of all time, Dora. This Wii game serves as an important piece of the Dora adventures.

If your kid is in love with the Crystal Kingdom, we make sure that he will love this game too.

In Dora and the Snow Princess, characters call out instructions clearly and slowly. This helps your baby to understand easily what he actually has to follow up on.

So, this game definitely counts in when it comes to the best Wii games for kids.

Ni Hao Kai Super Game Day comprises diverse mini-games. It serves as one of the most loved and best Wii games for kids at a preschool level.

This game is designed especially for the age group 3-5. A kid can learn about the game controls very easily. Hence, kids will be able to operate the Ni Hao Kai-Lan Super Game Day without difficulty.

Other choices for games include water balloon tossing, bubble popping, dancing, boat rowing, and many others. So, it acts as an overall great package for kids.

This game has made its place on the list of the best Wii games for kids because of its unique concept. Wii Music lets your kid take a jam session with their entire family. You can even create great music of your own with Wii notes.

Your kid does not necessarily have to learn about rhythm or music here. Not just that, your baby is not even supposed to be in synchronization with the played music.

This Wii game automatically examines and regulates the group’s play and performance as required.

Therefore, it is a perfect Wii game that allows kids and their families to have a great time together.

Important Tips While You Allow Kids to Play Wii Games

When your baby plays Wii games, you must ensure a few things. The important tips include the following:

Now, you can opt for the perfect game out of this list of the best Wii games for kids. Wii games offer a great medium to introduce your kids to the world of entertainment.

If your kid has already started playing games on the Wii gaming console, choose the right game from the list. So, keep your kids entertained with these awesome yet best Wii games.

Best Gwent Cards: The Most Promising Ones in the Witcher 3