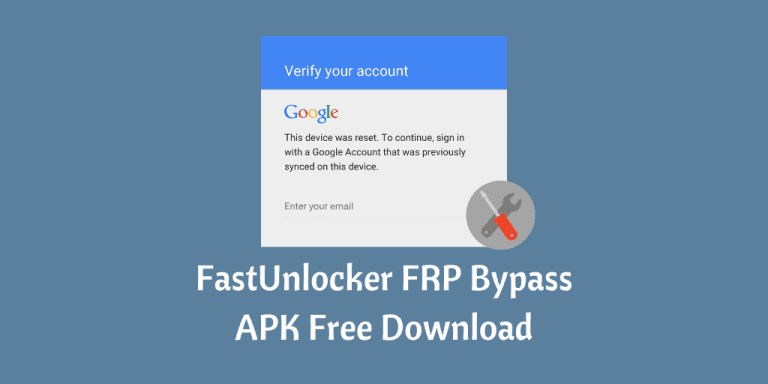 A lot of users have been searching about the FastUnlocker FRP bypass APK free download on the internet because they tend to forget the password for their Google Account often and thus become unable to perform a factory reset.

However, our research found some issues attached to the amazing utility offered by the FastUnlocker FRP bypass tool, and we are going to present every aspect to you so that you can decide if you want to go with it or opt for a better alternative.

About the Factory Reset Protection Feature

It makes the erasure of data or factory resetting of the device in unfortunate circumstances impossible because that requires the entry of the Google Email ID and its passcode that the unauthorized user won’t know.

PS: here is everything about the addROM apk for your reference.

We surely will help you with the steps for performing the FastUnlocker FRP bypass APK free download, but before that, we think we must introduce this amazing program first.

The FastUnlocker FRP bypass APK file is a program that was developed by a concerned tech team aiming at providing help to those people stuck with locked or inaccessible devices because they forgot the password of their Google account.

This tool has the ability to reset such locked Android devices by bypassing the password step with the Factory Reset Protection feature of Android devices to remove the Google account present on the device. The FastUnlocker FRP bypass APK program is compatible with all the mobile devices operating on Android versions 5.1 or Lollipop and above.

Note: One important thing to know is that this tool won’t help the users of Apple devices who are facing issues with resetting the iOS device due to different reasons.

Now, let us come to tell you about the ways you can get the APK file of this bypass FRP program for free. You might feel saddened at knowing that it isn’t easy to download the program for free, as you may have to search for the download link a lot on the web.

It’s very easy for android users to get applications for their devices via the Google Play Store. However, a lot of users reported having not been able to find the FastUnlocker FRP bypass APK program on the Play Store, and we also encountered the same problem while out tests.

While looking up the download link of the program on the web, you may happen to find a lot of websites claiming to provide the authentic and assured FastUnlocker FRP bypass APK free download link.

However, what would mostly turn out upon clicking on those links is that you will get redirected to another site that is completely useless in the context. These links might also download harmful viruses and malware on your device.

Even if we have been told that getting this software isn’t that easy, chances remain that you may get a copy of it and be able to install it on your system successfully.

Once you are done with that, you will also need to have a guide with the steps that will help you to operate the software FastUnlocker FRP bypass APK on your system, and we are going to provide you with that.

Before you get ready to perform the steps, here are some of the important things that will be involved in the process:

With all the things mentioned above ready, you need to get on with finding the right source for FastUnlocker FRP bypass APK free download.

Follow the Steps That We Are Going to Give Below for Operating the Software.

1. Download the bypass APK file from the link on the computer.

2. Now connect the detachable drive to the PC and paste the file that you just downloaded into it after copying the same.

3. Now is the time to deal with your problematic android device. As you will turn it on, the setup wizard will appear on the screen, and you need to follow the steps properly until the page for Google Verification arrives.

4. Once you see the Google Verification lock on the screen, you connect the locked Android device with the USB drive via the OTG cable at this moment.

6. You will see a warning pop-up emerge on the screen, which will say Install blocked. You have to ignore that and hit the button Settings.

7. In the Settings tab, click the option of Unknown Sources.

8. Hit the button Install and then wait until the FastUnlocker FRP bypass APK file gets installed on the device completely. Once that is done, hit the option OPEN for launching the program.

9. You will be redirected to the device settings section. Go ahead with the factory resetting the device as that will delete the locked Google account on the device too.

The device will restart after the reset, and then you can do the settings of the device as you want along with creating a new Google Account. Make sure you set up a password that you can easily remember.

Even with the promises of great services, the program nevertheless has some disadvantages that you must know. Here they are:

With the difficulties associated with FastUnlocker FRP bypass APK free download, a lot of you might already want to go with an alternative tool.

On that note, we would like to introduce the software Tenorshare 4uKey for all those Android users who would like to invest in an FRP bypass tool that promises the best services along with high efficiency.

The tool targets the Samsung devices specifically and disables FRP lock / deletes the FRP locks from them completely. The operability of the software is very simple and doesn’t require a lot of devices for the unlocking process but a USB cable that charges the device only.

The FastUnlocker FRP bypass APK free download may be a good service, but the drawbacks associated with it are enough to make one deter.

We recommend you to use the Tenorshare 4uKey software that can give the best of services and a high success rate without having to make things so complicated.

How to Stop Sharing Location Without Them Knowing?

Top Android Game Hacker App that You Could Use